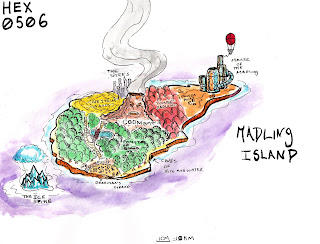 Click on the pic for a larger image.
(map is not entirely to scale)

According to popular legend, as related in the wine shops of Ssaur, the so called Madling Island, located in the Purple Lake of The Forgotten Depths, is the site of an abandoned factory, which, during the Lost Wars, was used for the production of Skeletal Warriors. Supposedly, a powerful Madling sorcerer took up residence in the old factory several centuries ago, and abides there still, engaged in an attempt to reactivate the factory's eldritch apparatus in order to raise an army with which to conquer Ssaur and the Rüinlands. The sorcerer is said to have a vast store of treasure. This horde is reported to be made up of magical, monetary and technological constituents. All of this is, of course, hearsay, and it is impossible to identify anyone who has traveled to the island and returned. Thus, the claims of legend remain unvalidated, and true knowledge of the place is scant, if not completely nonexistent.

The truth of the matter is that the rumors are largely accurate, but they tell only a little about the strange and terrible place that is Madling Island.


The island exists inside a time-space depression (TSD, henceforth); it actually occupies far more land area than it appears to from a distance. Although, at less than a kilometer away, the Island appears to be roughly 15 km from end to end, it is in truth, roughly 10 times as long. Furthermore, time flows differently there; for each day that passes on the island and in its immediate environs, a month passes in the outer world. Obviously, there is no missing the change in physical scale as one approaches the island; however, individuals within the TSD cannot detect the temporal aberration, as the day-night cycle is absent therein, replaced by an endless, brooding and blood-red twilight, punctuated only by the pulsating sullen glow of Godmount.

It is possible that a careful observer from outside the TSD might notice a dull flickering over the island, the cause of which would be difficult to ascertain.

The cause or causes of these strange conditions are poorly understood, although it is likely that the powerful reality warping magic utilized in the creation of entire armies of Skeletal Warriors- and the many other experiments and activities that took place on the island may have been among the causative factors.

Next Time: Reasons to go and how to get there.


I like big settings, but I also like mini-settings; what I like best, though, is a mini-setting nested within a big setting. I discovered this whilst running my first full on Metal Earth game (with True20) about five years ago . During the course of that campaign, we thoroughly explored the island of Skeeme, and many of the ideas, which have come to represent the foundations of the larger setting, came into being during the course of that game. I believe the Forgotten Depths has at least four relatively self-contained mini-settings: The Abandon City (Hex 0301); the top of The Fin (Hexes 0704, 0803,0802 &0902); the Weather Control Station/City of the Sharkmen/Megadungeon (Hex 0907); and Madling Island. This is the first in what will be a very long series of posts detailing the last of these.