[Map] The Hidden Land at the Sorcerer's Skull

Get a look at it here.

This was one of my two major projects for the last couple of months, and the first time I have really tried to do a large scale callaboration. It was educational on a technical level (to say the least) as it turned out to be several smaller projects as opposed to one big project. It took forever and ever (I started it at the end of field season in late october).

This means I can return to working on my webcomic, Cosmic Tales, which I hope to launch some time this year.

Email ThisBlogThis!Share to TwitterShare to FacebookShare to Pinterest
Tags: Maps 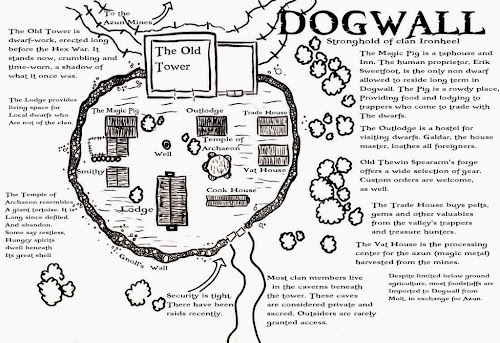 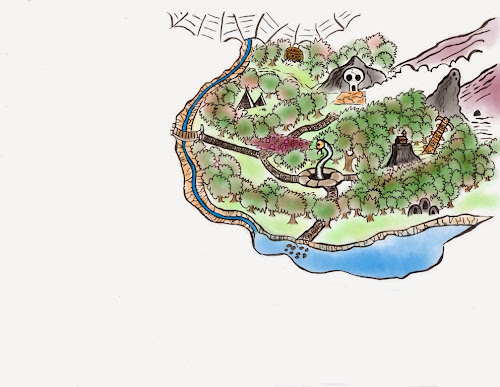 Molt, not so rough

I am at a friend's house and he has been doing something involving insurance and the phone and the internet...

So, while waiting, I went ahead and did this: 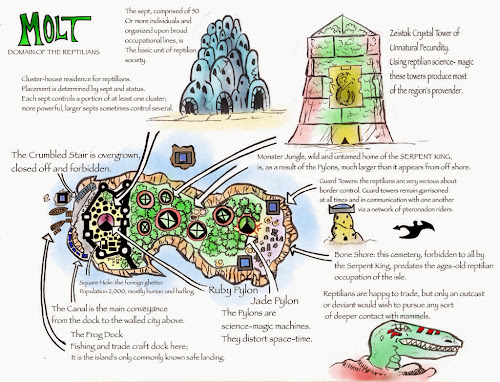 These are my most recent gaming purchases. I picked up the Withcery book after spending a few days pouring over the .pdf. It is currently my favorite DnD. It has all the classic fantasy stuff but also races, classes and rules for horror, weird adventures, and sword and planet. I also love the interior art, most of which is by Dominique Crouzet, the author. The pdf is available for free, HERE. Go. Look. The HC Is currently out of print as Dom is doing a new round of edits.
The important thing, of course, is that I have one.
I bought the WD book because I read a shitty .pdf of the Lichway and it was the first time I have ever looked at published adventure and thought, "Fuck, I'd like to use this, and it fits my setting." The Halls of Tizun Thane, by the same author, had a similar effect. I have already placed both into the Valley of Bones*. I'll alter each, of course, and I am going to redraw some of the maps. WD maps are too clinical for my tastes and look like apartment complex floorplans to me. Aside from that, both are kickass dungeons and I think Albie Fiore was a master of exactly how much detail to provide. The scenario book versions of these are great, too, because they include all the monsters from the WD Fiend Factory, and as I don't own a copy of the Fiend Folio (what?) that's good for me.
* I am going to use some one page dungeons as well, but more on that in a future post.
Anyway, I hardly ever buy anything, so to get two cool things within the same month is pretty badass.

Email ThisBlogThis!Share to TwitterShare to FacebookShare to Pinterest
Tags: Dwarfs, stuff I bought, Valley of Bones

Notes and maps in the rough.

I am getting ready to run Valley of Bones, so I've had to scramble to get some stuff done. I thought it might interesting to post my prep work. This mostly relates ro the two largest above ground settlements in the Valley. 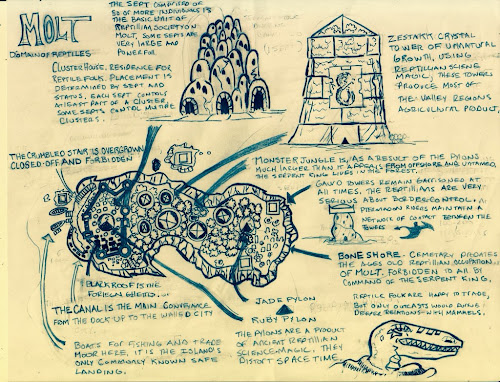 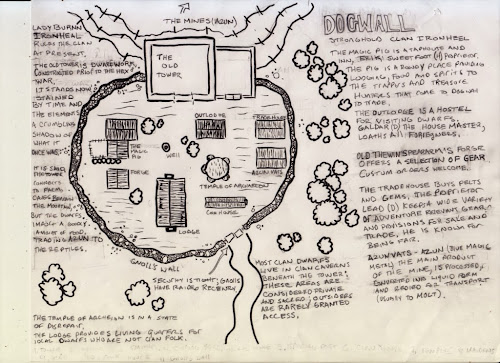 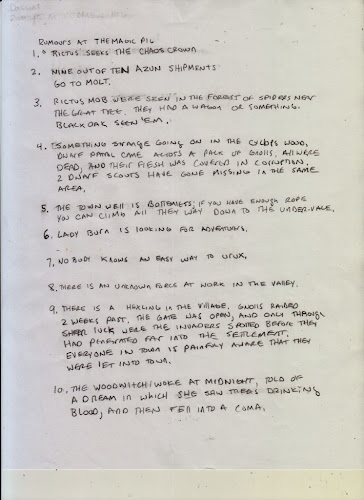 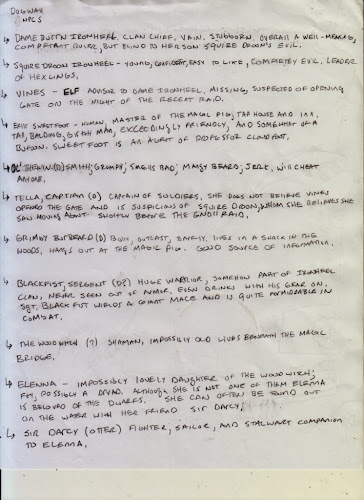 An eclectic group of spell casters reside in the valley.

Dame Murdann (E) is searching for spells for her list as well as magical and monetary loot. Cruel, quick to anger, and prone to violent excess, she is little more than a brigand with a handful of spells at her disposal. She is obsessed with collecting valuable hairbrushes, but makes no use of them. Styling herself an aristocrat, Murdann is very sensitive regarding her claims regarding familial connections to royalty. She has a small group of miscreants and outcasts in her employ. Together they reside in a collection of ruins somewhere in the Winter Forest.

Aside from a session of magical study in the morning, Dame Murdann is usually drunk.

Eldrew the Defiler (H) is a small time necromancer with big plans. Weirdly tall; waxy pale; skeletally thin; perpetually nervous and prone to drinking copious amounts of foul smelling brown tea, the Defiler posses a cowardice exceeded only by his lust for power. Recently, he has gained access to the Grall barrow known as the Place of Skulls located in the Cyclops Woods. The barrow contains the remains of a shrine and a sacrificial cenote (the Ghostwell). He has learned how to draw power from the Ghostwell, but has unwittingly become its slave in the process; even now his sell swords wander the forest deeps and beyond looking for potential sacrifices with which to feed the curséd thing. Meanwhile magical pollution emanating from the Ghostwell poisons and corrupts the surrounding landscape.

Aldred Ashlocke (?) is a mysterious figure, whose goals remain largely as unknown as his visage, which, on the rare occasions he is seen away from his stronghold, remains concealed within the preternaturally dark shadows of his black cowl. Ashloke dwells at a large manse on the upper slopes of Roc's Nest Mt. He occasionally sends servants into Molt for mundane supplies. Dozens of bizarre rumors concern the spell caster and his household, but no one knows anything for certain.

Despite the ambiguity, Ashloke is unquestionably a powerful spell caster.

Professor Cloudfog (E) is the ancient, powerful and notoriously absent minded master of Drift, the floating castle of the sky elfs. The sky elf spoken policy in regards to the valley is one of noninterference, but Cloudfog meddles incessantly through a network of agents, elf and otherwise. Cloudfog seeks to maintain the current balance of power within the Valley. Seemingly a benign ancient, he is occasionally ruthless in the pursuit of his goals.

The Serpent King (God King) is the magic using, shape-shifting ruler of the reptile folk at Molt. Known to prefer the form of a gargantuan snake, the Serpent king is the primary reasons no outside force has attempted to raid or invade Molt. The king's subjects worship him as a god.

Miss Witherspoon (E) leads the elfs at the Broken Spire, she was a youthful two hundred years of age when the Hex War began, but she spent the next several centuries locked in an enchanted slumber. Waking, at last, a few centuries ago, Witherspoon found a changed and damaged world. Her intelligence and prowess as a spell caster have resulted in her current superior status, but despite her fey appeal, she is a scowling dour woman. Witherspoon is said to have a penchant for swift action and a particular dislike for dwarfs.

Dreg, (dragon) a great dragon lives in the ruins beneath Urux, at the border between Vale and Under-Vale. Only the most powerful and well informed even know of his presence. His true power and his designs remain swathed in dred and mystery.