Deep Desert Map, a few words about space vampires and another pencil sketch

Here is the most recent version of the campaign area. The most significant change from the last map is the replacement of the (Athas like) Sea of Soot with the Black Smoke Sea, which is basically a basin full of toxic/cursed/radioactive gas. 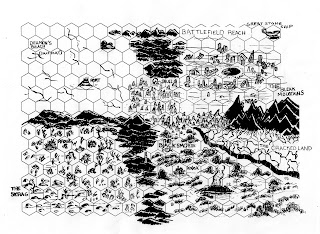 Below is a sketch of Xolox, an island thrust above the Black Smoke Sea, which once housed the Drinkers of Truth, the order of torturers employed by the Leach Lords* during the vanished, long ago epoch of their dominion. The site has been abandon since the early days of the Flare, the coming of which broke the power of the Leach Lords seemingly forever.

This will be the site of the first adventure, and i think I will open the campaign with the characters looking upon just this view from the gondola of an out of control hot air balloon. 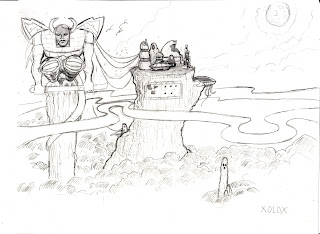 I have field work starting tomorrow so posting will be even more sporadic than usual. Mainly, though, I wanted to mention that beginning now and in the near future posts will address things that are of immediate importance to the campaign. To begin with that's going to be Xolox. I'll get back to Skull when the characters start in that direction.

*Space Vampires that held dominion over much of the Earth for several thousand years before the onset of increased of solar output which initiated the current epoch (the Flare) approximately 1000 years ago.

Another map! How exciting, shocking and original.

This is a regional map; the map for the entirety of Satan's Spine can be found to the left.

This is the area with which we're going to begin. I think a clear hex is about 15 miles, or a day's walk. The game will start in the Sea of Soot, which according to my notes is a very deep deposit of extremely light and fine dust, which cannot be crossed on foot and must be crossed in special vehicles or flown over.

I believe Xolox is some kind of island ruin in the middle of all that. I also think the Scorn will be involved as I'm pretty sure they have a settlement somewhere on Hell Gate.

Anyway, this was done in pencil ( although it is likely not complete) and I fooled with the image in iphoto for a minute. I may or may not ink it, as I rather like the way it looks now and I'm sure to add stuff as I go. 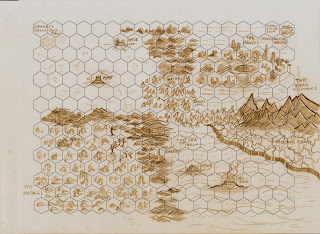 Email ThisBlogThis!Share to TwitterShare to FacebookShare to Pinterest
Tags: Anvil of the Sun, Satan's Spine, Skull, The Metal Earth, The Scorn

Last of the Icons drawings preview of drawings for Skull

We wrapped up our 2 year old ICONS game on Saturday whilst recovering from the show we all attended the prior evening. Here is the very last drawing I did for the game, it is one of the PCs after he has been given a cosmic upgrade. 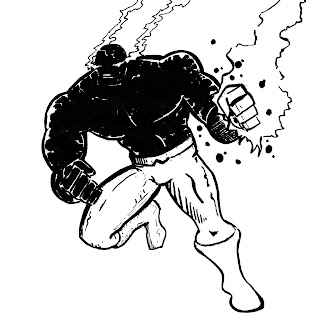 And with that, the focus here will turn back to Skull, The Anvil of the Sun, Satan's Spine and the Metal Earth in general.

Here's a preview of an un-inked drawing  of a street scene... 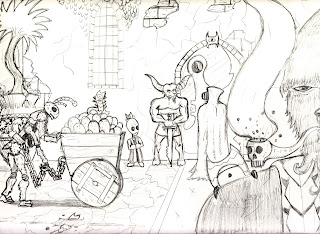 Special Thanks to Jeff Rients for suggesting the skull shaped bowl for the pipe.
Posted by Aos at 7:00 PM 2 comments: