Check it out: Cosmic Tales 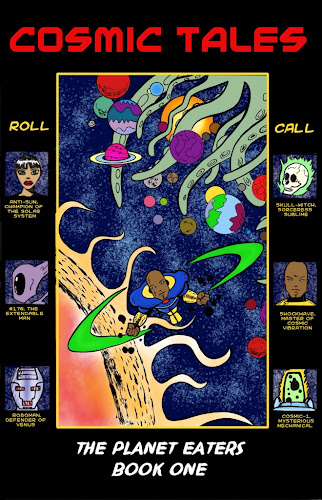 The comic will launch sometime on xmass day. 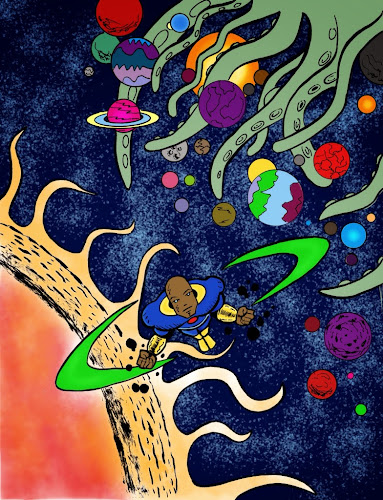 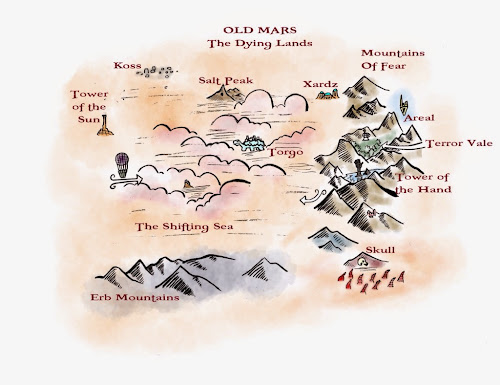 Christmas day quickly approaches, and I have a lot left to do for the mars game, which will probably commence on the 24th.

Tangentally, I am trying to improve my art, and a surprisingly large part of that is loosening up and drawing faster. So here are a bunch of sketches done, as a rule in under 20 minutes, working mostly, but with a couple of exceptions, from the bestiary. I have upped the contrast and junk on most of these, but they are mostly raw. A lot of this I just pulled out of my ass, but a couple major sources of inspiration were Samurai Jack, and preproduction stills/art from the JC movie.

The accompanying text is at the sketch stage as well in most cases. 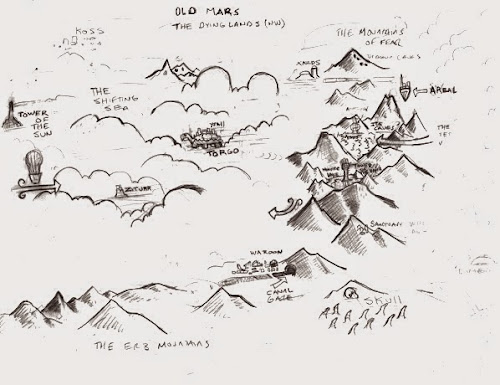 This is an exception in that it wasn't timed. It is my current version of campaign area, although I am going to move Waroon into the SE corner, I think. 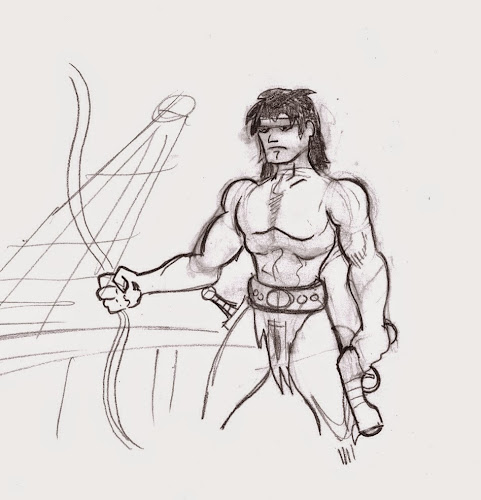 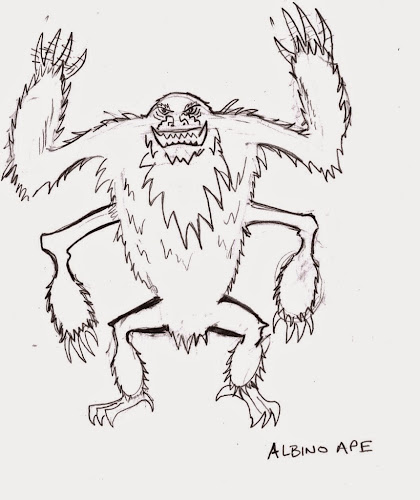 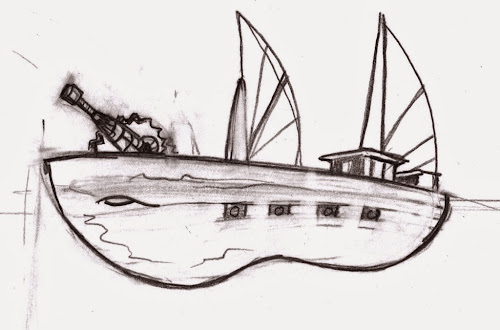 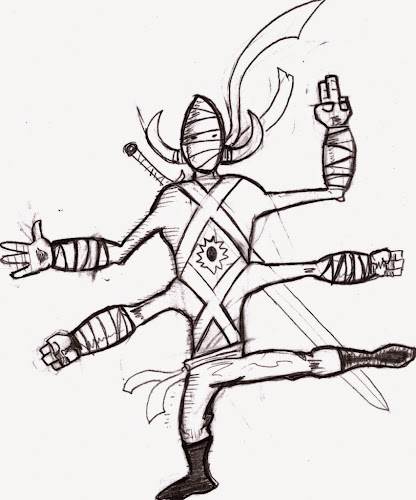 Warrior monk of the Rahn, the Sun God. 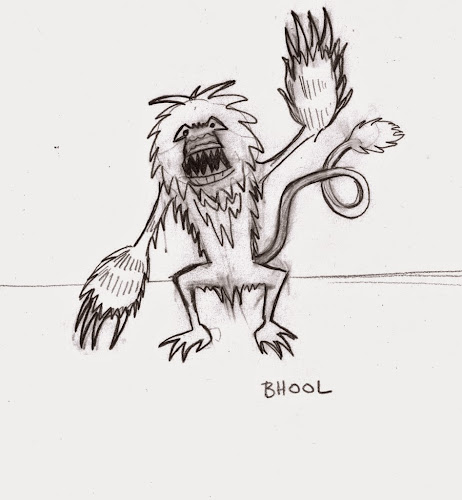 Monkey-like ab-dead creatures, bhool usually travel in troupes and haunt ruins. Ravenous monstrosities, bhool enjoy the flesh of the living and the dead with equal enthusiasm 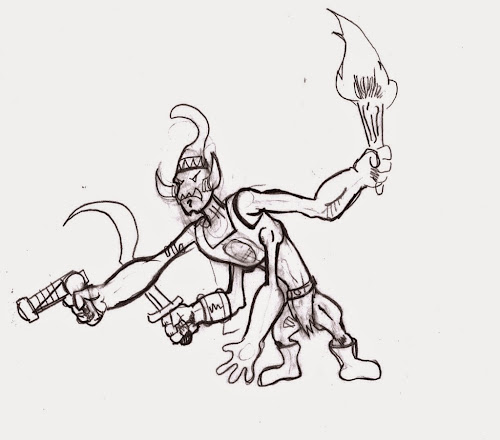 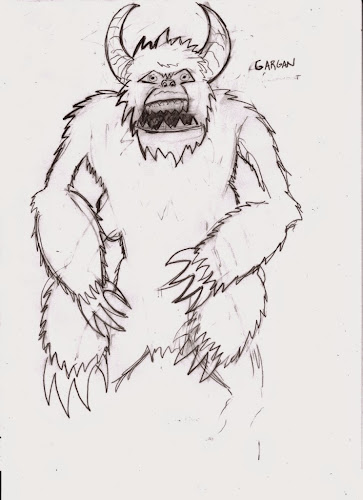 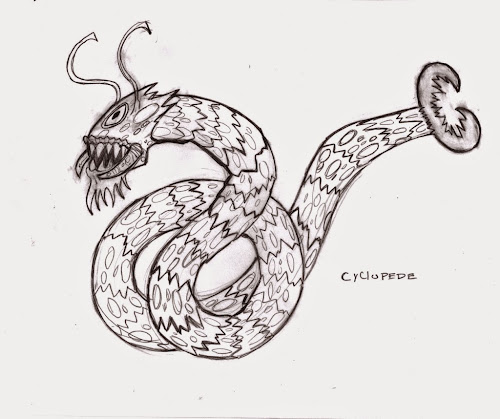 Huge, centipede like creatures, cyclopedes lay dormant for long periods of time between hunts. These catastrophically destructive creatures are rare enough and their depredations infamous enough that some of them have earned named. 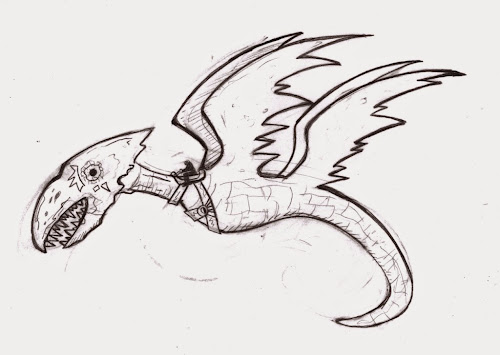 Puny shades of their puissant ancestors, the dragons of Old Mars are, nevertheless, huge, fearsome and and possessed of a high degree of intelligence. They communicate with their riders, and vis versa through psycho-phermons. Dragons delight in slaughter and destruction.

Rapacious red warriors, dragonaughts share a special bond with their mounts. It is unclear who serves who, dragon or rider.

Torgo is a giant turtle that slowly walks the shifting sea (big silt deposit). Ysall, once called the singing city, resides upon his back; a city of the uplifted animal folk (wild martians), Ysall now appears abandoned; but it is not; as the result of a long ago science-magic ritual, the city's residents are in cryogenic suspension. They cannot be woken- or their muderous and tyrannical god king, Ko-Dom, who lies locked in cursed slumber as a result of the rite, will awaken too. Since the rite, the city has been overrun with monsters, undead and beings summoned from the dreams and nightmares of the citizenry and their vile god. Recently a colony of Klaken (freaky bug people) have burrowed into the cold sleep chambers, compromising the wards therein; the seals have begun to crumble; how long will the dread Ko-Dom continue to slumber?

So I have a temple carven into the shell of Torgo, with a second level below it. The point of the adventure is to keep Ko-Dom* from waking up, although this will not be obvious immediately. I am thinking of starting with everyone in the balloon, during a sand storm, on the run from ninja-priests that worship a Roc as a sun god. They come out of the storm above Torgo. I think weird fungus bats or mars stirges will attack the balloon. So after that the PCs have to decide whether to crash in the city or outside** it, because the baloon is in need of repair. Torgo's shell is like the size of a small island and covered in forest.

The other idea I had was to begin the campaign directly after the crash of the baloon, after it has hurtled out of the sandstorm, with the characters unaware they're on a giant turtle. I can't decide. This makes the setting a mystery, with clues, like the fact that about once an hour or two Torgo takes a step and the whole world trembles.

The city/island on the back of a turtle or fish, aka an Aspidochelone, is a pretty old idea, but one I don't see used enough.

**and thus either catch up to and somehow climb onto Torgo, or wander the desert in search of back up adventure. I have no problem with them getting a glimpse of the fantastic city on the turtle's back and moving on, either.

Looking through powerful optical apparatus, the scholars of the Thorus Institute have determined that both of Old Mars' moons are habitable and, indeed, inhabited. As to the nature of the satellites ' denizens, further research is necessary before meaningful speculation can be entertained.

Airships are the greatest remaining wonder of the red planet's glorious past. These devices are powered by solar and psychic energy. Green Martians and Wild Martians are, by all reports, with few exceptions, unable to provide the proper sort of motive mental energy; as a result, Red Martians rule the skies of Mars. Most airships exist as constituents of city state navies, but pirates and even private ownership are not unknown; the latter exists as an ubiquitous fantasy among Red Martian Warriors.

A word about the short entries: these will all be part of pdf. A SHORT PDF. There will be art in the pdf, but I am art slammed right now getting my comic ready. I am trying to keep stuff really concise, because, man I read City on the Silt Sea and some of those savage worlds Hellfrost books and the word bloat fucking nearly killed me. In the first case I would have to condense that shit down to bullet points to use it, and the text told me everything several times, which I found both surpurflous and extreemly annoying. The Hellfrost books used 50 words when five would suffice. That shit makes me crazy.

Speaking of pdfs, I was going through my files a few days ago and realized that I completed my Gothic setting/adventure pdf, The Haunted Isles, but never released it. Sadly, two year old maps, layout and drawings cannot be suffered to live, because they suck beyond all human endurance, but I'll try to get those redone by, say, October first.

The Chronicles of Old Mars:

Martian history is a mess. Although the spoken language is unimaginably ancient, the writing system has changed several times over the millennia. Many of these old systems are untranslatable, rendering entire epochs of the world's history unknown and, most likely, unknowable. Further, the current rulers of Old Mars, the god-kings, have as a group gone out of their way to conceal and muddy the past prior to their ascension. Everyone knows that a conflict known as the Dragon War took place, for example, but few know how long ago or what changed as result. 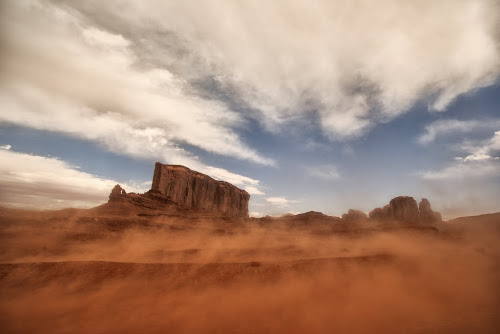 The Shifting Sea is comprised of silt so fine that it is incapable of supporting any but the most negligible load upon its surface. The sea is 8-12 feet deep in most places, although, in isolated spots it can be much deeper. Airships can fly over the sea, but are generally useless for cargo and extremely vulnerable to the frequent sandstorms. Large land animals (e.g., zitidar) can navigate the more shallow deposits of silt, but have difficulties with respiration after just a few hours of exposure. Sand ships are the safest and most reliable means of conveyance across the Shifting Sea. All known salt mines in Stark's Reach are located on islands (areas of high elevation) within the Shifting Sea.

Note: on the current version of the Stark's Reach map (left sidebar) the Shifting Sea is mislabled as the Lesser Sea of Sand. Also props to TSR/WotC's Dark Sun setting which provided the inspiration for the sea itself.

Most of the cities of Old Mars are ruled by despotic beings of power known as god-kings. In Stark's Reach, only Xolox, ruled by a Jed and council, remains free of such tyranny. The god-kings each maintain a priesthood and demand worship from their subjects; but many in the cities still pay secret homage to the old gods, namely the Sea Queen and the Dragon Lord. Beyond the safety and confinement of city walls, in the wastelands, nomads, green, red and otherwise, scoff at these upstart godlings.