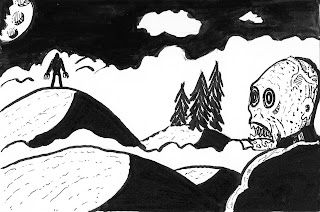 Diseased looking, red-eyed, skeletally gaunt humanoids of giant stature, Screamers gain their name from their most fearsome attack. Once per day a screamer may release special howl which hypnotizes all within a 60’ radius. Save or paralyzed for 2d6 rounds. Screamers prefer to eat their prey while it is still alive, paralyzed and helpless. Hungry, these monstrosities roam the wastelands, continually on the lookout for fresh meat. Screamers can run fast and have the stamina to cover very long distances and they never give up. Often they hunt in packs. Due to their thick hides screamers cannot be harmed by normal melee weapons.

Extra dimensional beings that look like giant tentacled eyeballs. Anyone who meets the gaze of a Zetoan is turned to glass. Zetoans sometime construct elaborate labyrinthine gardens full of glass figures. Zetoans are irrational beings with alien motives. They communicate with telepathy.

Meter long carnivorous iridescent worms. Cave maggots often lure prey close by clustering into a “doorway” shape along the walls of dark caves. This produces the illusion of a lit entrance way, curious animals wander close. Will glow for up to 1d6 after death and can be used as a light source. Given time they can borrow throw solid rock and subsequently are often a problem in greenshafts.

Sparkling ooze was originally designed to be a self directed cleaning agent by its forgotten creators. Often found in ruined cities, this semi intelligent translucent slime is the ultimate solvent, dissolving conventional materials on contact. Conventional weapons and armor will dissolve with one successful hit. Sparkling ooze will fission if hit by energy weapons. Some sparkling oozes emit a soothing gentle noise like wind chimes or elevator music.

The green blooded, red scaled Slaard is neither arthropod nor reptile, but possess characteristics of both. While they dig, Slaard continually emit an ultrasonic pulse which destabilizes the solid rock before them and makes it possible for them to burrow at incredible rates. Slaard live and hunt in rocky badlands, often tracking their prey from beneath the surface.

Voracious scavengers, Crypt Apes live under ground in the forgotten necropolises which honeycomb the subterranean space of the ancient earth. Despite their predilection for dead flesh, crypt apes will not turn away from a a chance at fresh meat. Instead of striking with its powerful fist, the crypt ape can grab hold of an enemy for 2d6 damage. ST -2 for escape. The crypt ape can also breath on anyone it catches hold of. If the victim fails their saving through (-2) they spend the next 1d4 rounds incapacitated, vomiting. This only works once per attack, per victim. A favorite tactic of crypt apes is to lay in wait for unwary grave robbers inside of empty sarcophagi.

Half distorted manthing, half centipede, Centauripedes live in savage tribes hostile to outsiders.

Similar in appearance to a trilobite, the trilon is a mutant arthropod about the size of a dinner plate. Its bite is radioactive; anyone bitten must make a saving throw (+4 mod to their roll) or contract radiation sickness. If untreated, radiation sickness will lead to death in 4 days -25% hit points each day.

Huge (20’ long), fast moving engines of destruction. Giant trilon can project a stream their own irradiated blood in cone for 15’ (five foot wide at the base). Anyone inside of the come must make a save (with a +4 modifier for the victim). Those that fail the save take 3d6 damage and contract radiation sickness (see Trilon, small); those that make the ST take 3d6 in damage. Giant Trilon are sometimes used as mounts by the soldiers of Ssaur, but only the shae beast masters know the secret of their gentling.

Huge, intelligent and evil predators. Devilgoats hate everyone and every thing. They live to kill and destroy. In addition to their bite and stamp (1d6 each), Devilgoats can breathe fire 3 times a day in a 45 foot cone, 15 feeet wide at its base. Anyone caught in cone takes 3d8 damage, (1/2 damage with a successful ST). Devilgoats can jump 100 feet horizontally and 30 feet vertically.

Snake made of living metal. Any one bitten takes 1d6 damage and must make a ST or they will turn into iron.

Email ThisBlogThis!Share to TwitterShare to FacebookShare to Pinterest
Tags: Critters, The Metal Earth

An Outsider might be a Lizard Man from the Jungle of Nool; a human warrior sent out from the Enclave on some unknown mission, or a time-lost warrior robot from the future with a sinister agenda. The possibilities are endless.

Members of the Outsider class are powerful warriors from beyond the known world. They travel for a reason. Sometimes they are looking for a place, maybe their lost homeland; other times they travel for the opportunity it provides to help the people they meet on the way; an Outsider might seek vengeance, a way home, an escape from shame, penance, the secrets of time and space, treasure or any number of other things. The character's point of origin and purpose should be mainly up to the player, although input from the referee should not be completely ignored.

Select one of the following at 1st Level:

Select one of the following at 4th level:

At 7th level select again from the 1st level list

At level 12 select one from the 4th level list.

Outsider characters begin at first level with no money and must roll on the table below:

1-4. Nothing: character begins the game naked in the wilderness.

Combat progression is as a fighter. 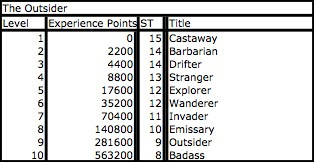 Email ThisBlogThis!Share to TwitterShare to FacebookShare to Pinterest
Tags: Classes

The Whitebox, Savage Swords of Athanor and Equisite Corpse

Some short and honest reviews:

The S&W White Box: The art is nice. The cover image is easily my least favorite of the new images, but still it's pretty neat. I liked the Mullen cover. The lower box is flimsy. I wish the box was about an inch or so thicker, so I could put some of my other digest sized booklets inside of it. The trim job on the covers is less than perfect. All my books have overlap; one of them (Book III Monsters) is kind of sloppy. It took too long to get here. The Old School Primer shouldn't be in the set. The included adventure looks pretty cool, if a bit short. I won't use it anyway. The layout is very good. I like the digest sized books. Over all, I'm glad I bought it, but I have some reservations.

Savage Swords of Athanor is an imaginative planetary romance setting for Swords & Wizardry. The book has lots and lots of typos and a few confusing and awkward sentences. Aside from two maps, there is no interior art. In every other way, though, it is excellent. I am especially fond of the mutation tables and the magical mishap tables. The monster section is nice too, providing, among other things, a groovy selection of strange vat creatures and dinosaurs. The player character races are original, weird and cool. There's also a neat little system for character skills. The author's blog can give a you a more in depth idea of what the setting is all about. If you aren't overly bothered by typos or spider people with German surnames I recommend this without reservation.

Exquisite Corpses is a funky little spiral bound book. The bulk of the book is made up of full frontal body shots of monsters divided in three sections (head, torso, legs) by dotted lines. Cutting the drawings at the dotted lines allows one to mix and match the body parts of different creatures. There are guidelines explaining how to stat up the creatures. The book also includes some sample creatures and a bunch of nifty random tables for making your monster special. I like this book. It is great idea well executed. I'm told it's fun to look at while one is chemically enhanced. Furthermore, there are naked tits. Recommended.


Notes:
1. More actual content next week. Two words: Metal Space.
2. I will not engage in any discussions regarding the Old School Primer here. I wont delete your comments, but I've said what I have to say elsewhere (mostly at The RPG Haven).
3. I'm not sure I'll ever review anything ever again.
Posted by Aos at 9:15 PM 1 comment: