Xolox, Level one, Beneath the Maiden [MAP]

A spiral stair found within the structure known as the Maiden, leads down into the darkness, and into what was once the true abode of the space vampires. They lived, fed, worshiped their obscene martian gods and exercised their unholy science within these tunnels, leading some scholars to believe that the architecture of Under Xolos is a physical reflection of the aggression, paranoia, isolation and lust that are said to lie at the core of every vampire.

Once the vampires ruled Satan's Spine, but the waxing of the sun brought them down. Here though, at Xolos, isolated from even the wasteland by the lethal vapors of the Blacksmoke sea, one must wonder: what secrets, what treasures, what power might linger? 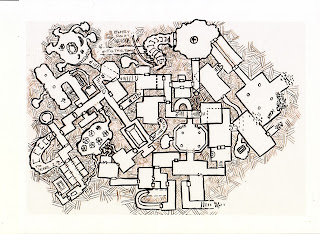 Humans as a class, the Endless- reskinning the B/X elf

Before their empires crumbled, humans perfected the science of life extension. Although there are (or may be) a few remaining breeder populations, a major subset of the extant human population consists of ancient survivors of the forgotten past. And that past is truly forgotten, because, as it turns out, it is very difficult for humans to retain memories for more than a couple of hundred years. As a result, the Endless periodically enter a period known as the fugue, where they forget themselves and must begin anew.

Although personal memories are often reduced to images or short, difficult to interpret mnemonic flashes, not everything is lost; in fact, some things are never wholly forgotten.  Endless never forget the basics of combat and magic use. They can wield any weapon and wear any armor, in addition to casting spells as a sorcerer. For the Endless, the process of level progression is more of a process of recollection than one of new skill acquisition.
Endless advance in combat as Adventurers and may select one advantage from the Adventurer list every three levels (beginning with level 3). [Adventurers will be covered in an upcoming post].

An Endless must have at least 13 in both prime requisites in order to get the +5% to experience. They must also have an INT of 16 and a STR of 13 to get the +10% bonus.
Endless have darkvision of 60 feet, and have keen eyes that allow them, when actively searching, to detect hidden and secret doors with a roll of 1-2 on 1d6. Because of their altered physiques, endless are completely unaffected by the paralysis ghouls and other undead can inflict.

Pretty sure I pinched at least a line or two directly from Labyrinth Lord's Elf class.
Posted by Aos at 8:48 PM 3 comments:

Districts of Skull: The North Gallery and the Kennel

The North Gallery:
This neighborhood occupies the north central area of the city, north of the Canal of the Moon and roughly bounded by the Lesser Ziggurat in the east and the Kennel in the west. Streets and tenements in this area tend to have poetic names, which sometimes seem ironic given their generally dilapidated state; the vegetation in the North Gallery, while kept from completely overwhelming the avenues, is otherwise largely allowed to grow unchecked. Creepers crawl up the sides of nearly every building and weeds of every variety trust up through cracks in the ancient pavement.
This Gallery is the most densely populated section of the city, with most of its residents crammed into over-crowded multi story tenements., or, as is the case with the slaves, kept below ground in the green shaft.  Despite the ubiquity of coster mongers selling various kinds of food (mostly a dubious sort of sausage served on algae bread) the majority of the population subsists for the most part on pap and water. There is a little money here though, as the Kennel employs grooms from amongst the laborer caste and skilled workers from the artisan class. With the exception of the lanes and streets surrounding the Kennel and the Lesser Ziggurat, nymphs are in abundance, although, unlike their counterparts in forecourt the nymphs are named and attached to families. Priest tend to move through this neighborhood in force.