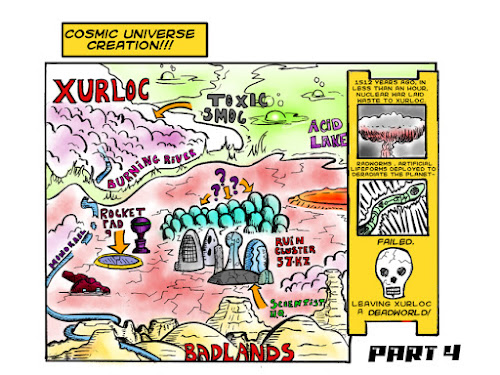 More on Note-maps and Timelines.

When I edit this into a final document, the instructions will be more seamless; as it stands, however, after a period of reflection, I feel like the previous entry was more or less this: 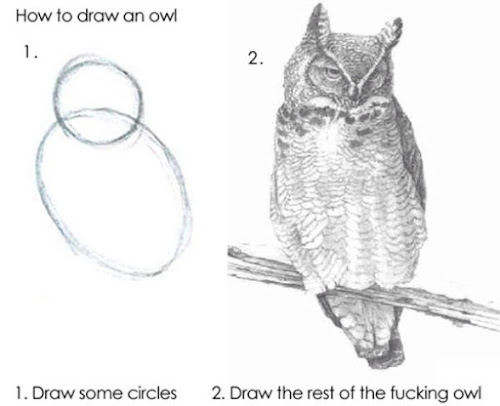 Let's fix that by:

What goes on the map?

In supers, anything goes. Unused campaign settings for other games make ideal alien worlds- regardless of genre. High fantasy; dinosaur planets; post apocalyptic science fantasy; giant robots; giant monsters; space monsters; worlds or whole sectors of space like the Old West or ancient China; Cthulu or whatever else you can think of, it can almost certainly be encompassed within the boundaries of your superhero universe with little or no trouble.

Make a list of what you want on the map.

Center of the universe

A breach in space-time leading to ?

Fingerprints of the ancients

Important: A complete inventory of planets and sundry is not required to begin making the map/working on the timeline (Steps 3-?). You can mark down a few planets and then let your ideas cook for a few days before adding more. Further, this is a good time to work on the timeline, and think about any gods or natural forces that might be tied in with the fabric and history of space-time. Dig?

Today's example is a map of Drift Sector, a volume of space nested within the larger Earth? Universe map shown in part three of this series.

What goes on the timeline?

Birth of the universe

Origin of the space gods

The rise of super powers on earth

Galactic and or terrestrial wars

Below: a sample timeline: I find it helpful to put early events at the top and and move forward in time as I go down the page. 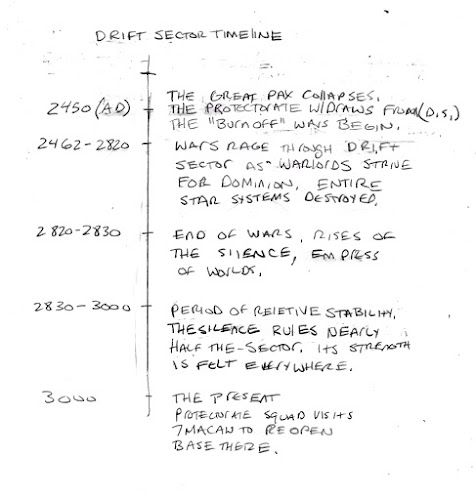 Lay out the map.

Note- the creator should feel free to modify any and all of this from materials to paper size to format.

For this map, we're going to use a sheet of standard printer paper in landscape orientation.

Make borders of 1 inch at the top and bottom of the page, and 1 1/2 inch on either side. Within this frame, thinking about the worlds you want in your setting, lightly draw in some circles and other shapes to represent the planets and such. Name stuff. Think about the inhabitants and the heroes and villains associated with the sector and its planets. Take notes on the side. If you are short on ideas, look at the list in step one- or read the homework. 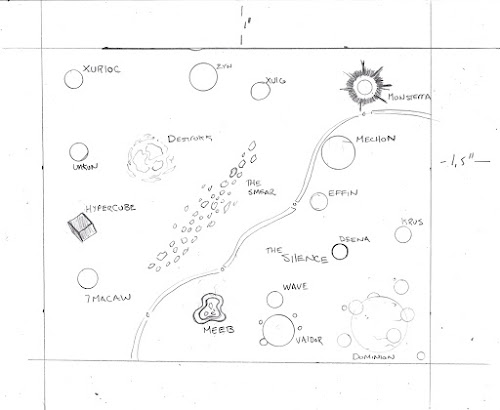 Add some detail to the planets and other objects. A few lines here and there make a big difference. Be expressive! 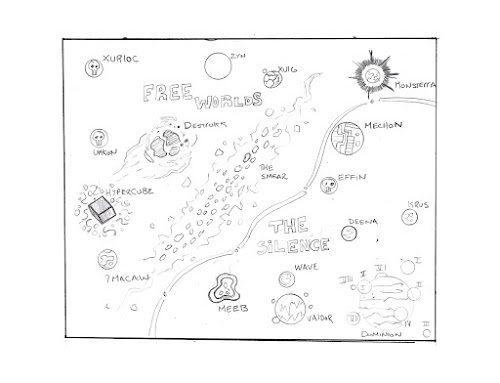 Write a few words about each of the map's features in the margins. You need not be comprehensive. For instance, in the example below, I have yet to key the eight moons of Dominion; I am still mulling over their exact nature. 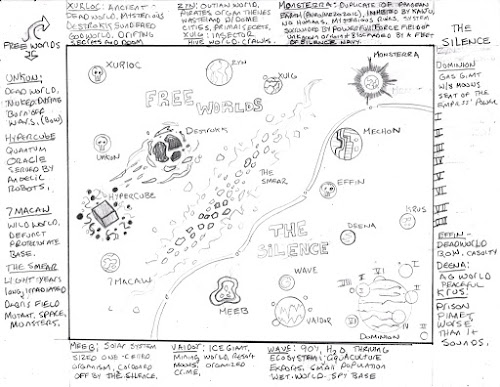 The map is perfectly servicable as it is, but you may wish to add Ink and color. I colored mine with the ipad app, Art Studio. I also cleaned up the text and added some campaign ideas I had while working on the map. 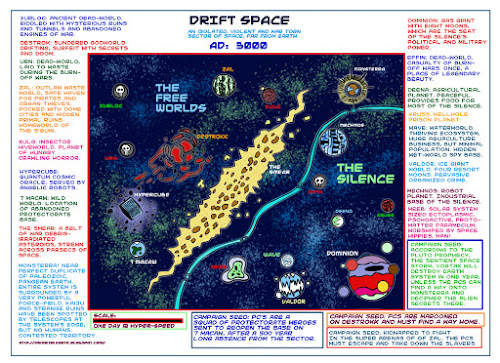 Okay, now it is your turn. Make a map.

Next time a world map, and some NPCs, or such is the plan. 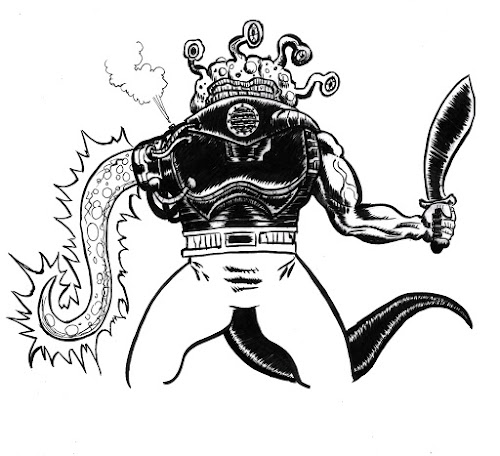 I am adding a second class, Cosmonaut Esper; a starting adventure which links into to a weird wilderness, which in turn links into Equitorial Empire Province: Karakul (map on your right, follow the tags from there). The EE/ Age of Lead stuff was originally concieved as a setting for cosmonaut nonsense and I may include an introductory Age of Lead appendix as well.

Here are some maps:

I don't wish to give too much away, but one major challenge of the minisetting is finding a way past the Barrier 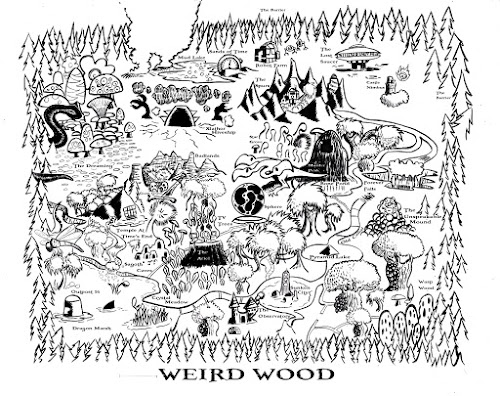 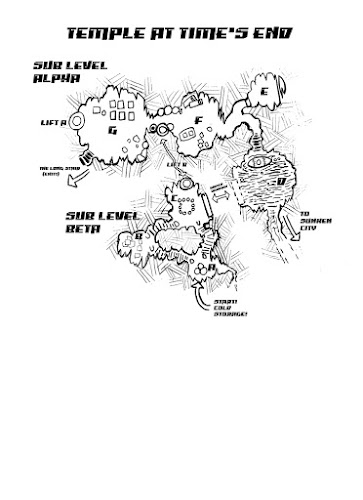 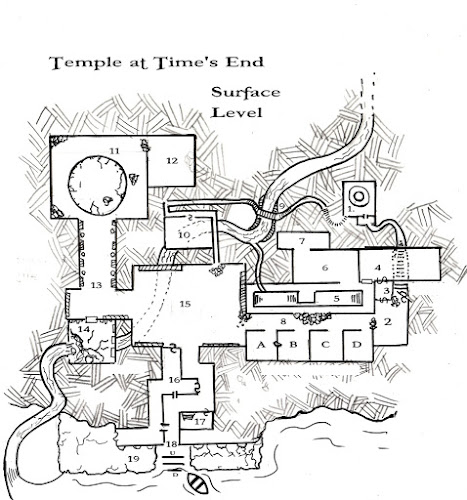 I have too many projects going on; here is a by product of the expanded B/X cosmonaut, which I worked on over the weekend. I promised to do some posts on stuff like this long long long ago, but never did...

NOW IS THE TIME FOR OATHS ONCE BROKEN TO BE FILFILLED! LET US RIDE MY BROTHERS!

Anyway, mountains (you get a bigger image if you open it in a separate tab): 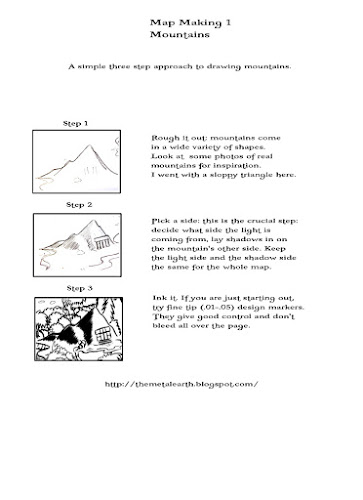 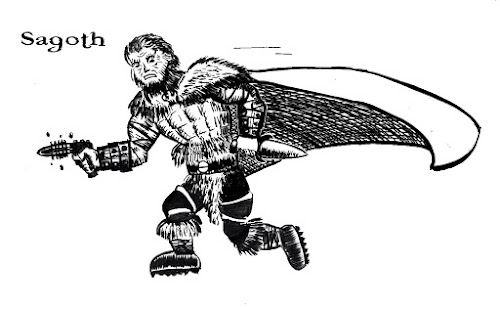 Hirsute and ape-like, the ab-human sagoth exist as the most populous and versatile folk in and around the lands controlled by the empire. Sagoth comprise a large part of the imperial legions (second only to skeletons) and the vast majority of the empire's farmers and artisans. Furthermore, large populations of sagoth barbarians live outside of the the empire's control.

Player characters are assumed to be imperial soldiers or outland barbarians.

RESTRICTIONS: Sagoth use a D10 to determine hit points. They may wear any armor and use any weapon. A character must have a 9 or higher constitution to become a sagoth.

SPECIAL ABILITIES: Physically sturdy, sagoth add 1d4 to their final STRENGTH score. Sagoth relate to animals exceptionally well; at 3rd level a sagoth may charm animal as the spell, once per day. At 5th level the sagoth warrior gains a land mount, usually an orkan or a mammoth. At 8th level the warrior has the option to switch to an aerial mount, usually a war bat. Bat riders are held in high esteem, and are the closest a member of the sagoth class can really come to the aristocracy.

Progression and saving throw: as dwarf. 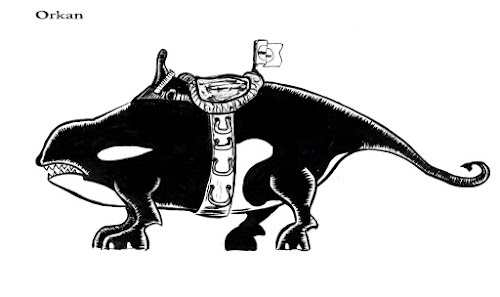 These huge, surly beasts serve as mounts for the imperial light calvary. Notorious for their short tempers and hateful disposition, orkan prefer to trample medium sized and smaller opponents.

If an orkan fails a moral check during combat, it will turn on its rider.