The Trund are a nomadic humanoid people, who make their living as traveling tinkers and traders, forever moving across the Anvil of the Sun. They are organized into bands. Comprised of 30-50 individuals, each band lives and travels in a large power driven wagon known as a trundle. It is not known for certain how many bands there are.
The Trund are, as a rule, extremely proficient at making repairs to ancient technology and they can easily mend and fabricate far more mundane items. Although they all carry revolvers and are rumored to have access to weapons even more potent, the Trund will not make or repair weapons for outsiders.

It is said the Trund wander the desert in a perpetual round, always searching for some treasure they claim to have lost long ago but cannot name or describe. Although, they travel in small groups and are never aggressive, all agree that it is unwise to attack the Trund. It is difficult to tell the exact nature of the trund as all of them wear outlandishly psychedelic protection suits with full headgear at all times.

Outside of trade and work for hire, the Trund have minimal interaction with other folk of the Anvil. They rarely enter the relative comfort of Godskull or other settlements, preferring it seems, to remain in the desert with their vehicles to the near exclusion of all else.
Posted by Aos at 6:58 AM No comments:

Email ThisBlogThis!Share to TwitterShare to FacebookShare to Pinterest
Tags: Anvil of the Sun, Satan's Spine, The Metal Earth

Acid Lake:
A mix of sulfuric acid and hydrogen chloride comprises the body of the lake. Taken together, the lake and the mesa land to its west, known as the Taint, represent some of the Spine’s most hostile and unforgiving country. An alternating combination of jagged cliffs and beaches of jagged glass surround the lake. Fumaroles, stinking of sulfur, roll over the burbling surface, poisoning the air and limiting visibility.

The lake is nothing less than a wound in the world. The acid is produced  as waste by a group of earth elementals that have latched on the land surface that now forms the lake’s bottom and are feeding on the planet’s dwindling tectonic energy. This has been going on for over ten thousand years. In appearance, the acid elementals resemble giant leaches made of pitted and stained stone.
Posted by Aos at 7:03 AM 3 comments:


Hmmm...
Well, I'm a bit daunted by the sheer number of unfinished projects that I've got going on this blog. So in effort to dig myself a hole all the way to the Pellucidar, here's the start of another new project*.  What we have here is a first look at Satan's Spine, the campaign area for my upcoming Metal Earth game. I'll be happy to answer any question regarding the map or really anything else relating to the blog in the comments.
Larger version here. 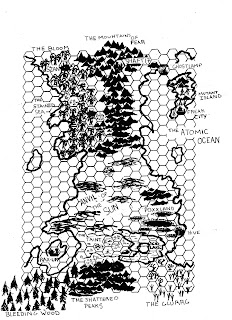 *it's probably best to view this blog as kind of like pizza place run by a spastic and poorly trained hobo. Sometimes the pizza is cooked, other times all you get is some sauce, a few toppings of dubious provenience and a mumbled, Thunderbird-soaked "fuck you" for your trouble.
Posted by Aos at 5:40 PM 4 comments:

Alex Schroeder Does the Impossible!

He made one of my posts useful. Here is a link to the stats he's written up for all the critters in The Forgotten Depths. His interpretations are very imaginative. I'm especially fond of  his version of Vampire Grass.
Thanks Alex.
Posted by Aos at 5:00 PM 2 comments:

I was supposed to post something substantial yesterday, but I forgot and... whatever.  Anyway, I'm thinking about writing a bit about fitness here, anyone interested in that at all? The gym dude told me I need to eat 4000 calories a day this morning (urgh!) so it's on my mind.

The Map is here