As with last time, I've waited until the last minute and we have our game tonight. All of these were done between 12:20 and 3:20 this afternoon. For those just joining us, these guys are all aliens for my super hero game. If you'd like more of a clue see my previous post.

First up we have: Braino! He's thinking bad thoughts. About... you! 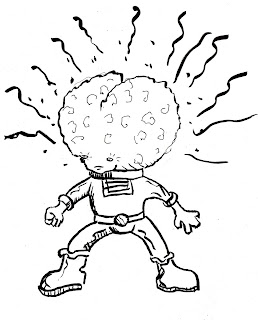 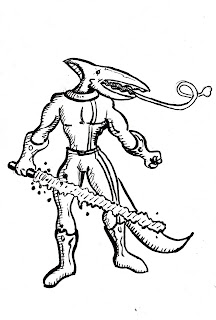 and his pal, Squishy: the alien amoeba! 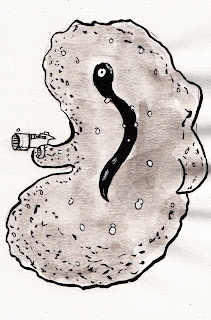 I did a line and wash thing with Squishy. The paper warped. Apparently, the scanner doesn't like warped paper. Bitch.

Next, the Glar, synthetic foot soldiers of the Krang! 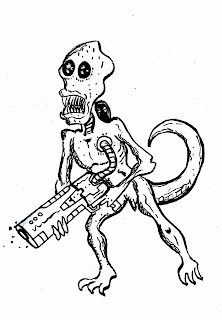 And now, the last resort of the Krang! The Worminator. I rather like this one, actually. 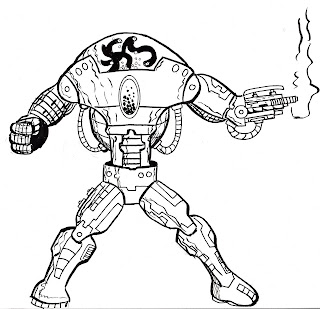 Anyway, regarding the Metal Earth. We will be splitting our weekend game sessions between Icons and the Metal Earth starting in a bout a month. I will not be the referee for the ME game, which I think is ideal, because it will actually be more of a test of the rules as opposed to a test of my ability to make up shit on the spot (although I'm sure i will do some of that as well). And I get to play! So this will be the play test before I release a general play test doc- if I decide to do so.
Posted by Aos at 3:25 PM 3 comments:

Here are some drawings I did for Sunday's game Earth Zero (Icons). We have finally hammered our online system down. We use Skype for voice and infrno for the game table. We turn off all A-V functions in infrno. Although a big part of face to face gaming is being, you know, face to face, we've found that online video is a pain in the ass to implement and kind of distracting on top of that. We had a blast on Sunday without it, so there you go.

Anyway, here are some extremely crappy drawings I did for the game- click to enlarge and all that. I had limited time to prep, so I spent 15-30 (or less) minutes from concept to pencil to inks on each one. I'm going to make this a regular practice, I think, and maybe allow myself an hour or two to do a post session drawing of a scene from the game. This will create a pictorial history of each campaign. Augmented with captions, I think it'll be neato- despite the rushed, substandard look of the art. 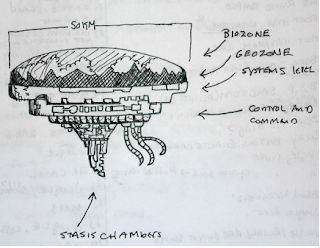 The characters (Doc Crucible and The Fire Knight) hail from 1949AD; however, as a result of a long series of events, they have found themselves on board a derelict generation star ship (pictured above) named Interphaze, which left earth in the 54th century, but has been drifting around in No Space for about 6000 years. The Biozone is designed to look like the surface of the Earth; DC and TFK actually wandered around up there for a couple of sessions before they accessed the lower level and got a look out into space and a clue. The scale is all wrong on the pic, actually, I eventually decided it was too small. I think the ship is at least a couple of hundred KM long. I'm waffling on that point. Also I did that drawing in like a minute and a half with a ballpoint, so cut me some slack if you will.
As it turns out, the human crew died off long ago and the ship is currently run by (possibly evil) gene engineered dolphins, who tend to the 20k human colonists residing stasis chambers located within giant, artificial, water-filled caverns on the systems level.
Also, there are monkey people, most of whom work for the dolphins, but some who have broken away and formed their own civilizations

Anyway, the ship has an infestation of mind control parasites known as the Krang! The Krang! arrived on the ship when their much, much smaller star ship had some kind of hyperspace malfunction and materialized inside one of the thousands of artificial caves that make up the geozone. 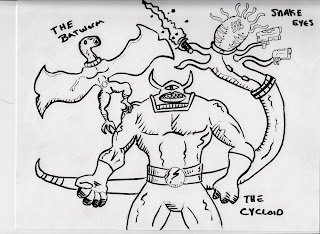 TFK and DC are part of a temporary alliance of money people and dolphins committed to stopping the Krang before they gain access to the slumbering human colonists. The Krang! crew is made up of a disparate group of mind controlled aliens, like these guys on the left.

Here is the picture of the Krang! spaceship, which is trapped in what the Monkey people (The Imae) call "The Cave of the Old Ones." Incidentally, this is where Sunday's game came to a close: 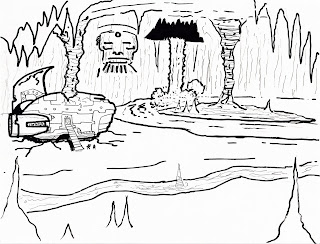 Last but almost certainly least, a security droid that the the boys activated by accident whilst exploring another area: 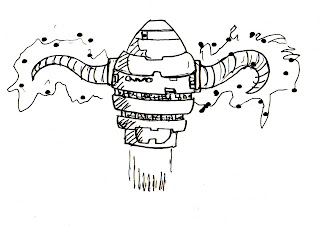