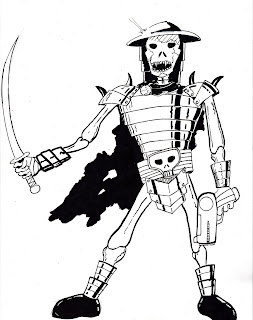 Skeletal Warriors, or the Half-dead as they are sometime called, were created during the course of a war lost in the Mists. At one time there were vast numbers of these creatures, but in these latter days there numbers have dwindled. Most of the Half-dead are mindless undead automatons, usually employed by a renegade Shae Sorcerer or a group like the Changers. Player character Skeletal Warriors are among the few that have spontaneously gained self-awareness. Some are haunted by hazy memories of their first life, before they were raised; many have no recollection of anything aside from their days as undead warriors. Due to the fragility of bone structure in the extremities, the hands of feet of Skeleton warriors are made from a compound of bone, necrotic flesh and enchanted stone.

Shit drawing provided free of charge. Click to enlarge- if you dare.