Halls of the Hidden Prince, level one [map] and a word about my favorite blog


My favorite blog these days, is without a doubt, Dyson Logos' A Character for Every Game it is all gaming, all the time. Dyson generates tons of awesome content- much of which I haven't even gotten to yet. He avoids pretty much every OSR kerfuffule, and his underground maps have made me aware of something that I'd never given much thought to before. I'm not certain if I can articulate this properly, but players need to get a groovy dungeon vibe from the referee; the ref's descriptions, the way he runs encounters and traps; what encounters, traps and dungeon dressing are included in the first place and so on. However, before she can share it, the referee also needs to get this groovy dungeon feeling. The problem, of course, for the ref is finding it. Dyson's maps give me that feeling. Also, they kick ass, and there are like seven million of them. Thanks man.

So, anyway, as an example of the sincerest form of flattery, here is my impoverished attempt to emulate his style (I've stolen the cross hatching technique wholesale), combined with some of my own notes (which were previously posted here in a slightly altered form back in 2010). A key will be forthcoming. This stuff actually does tie in to the current Madling Island project, because these levels are situated beneath the Tower of the Changer.

The Halls of the Hidden Prince

The combined cavern/room complex beneath the Tower of the Changer was constructed in stages. During the waning epoch of the Minotaur Empire, a disgraced imperial aristocrat and his retinue came to the Crumbled Mountains looking to create a new summer labyrinth far from the intrigues at court. Unfortunately, the aristocrat in question, whose name has long since been forgotten by history, had in his employ a shae sorcerer, who, not long after the completion of the complex, manifested an unexpected desire for power, coupled with a previously unexpressed talent for necromancy and a rather excessive amount of bloodlust. Anyway, good times ensued, which ultimately resulted in an empty complex- empty of the living, that is.

The next to come were a group of agrarian Lizardmen from Ssaur who were trying to create a utopian colony. Although, they installed many grow-vats and laid the foundations for a bitchen’ subterranean ecosystem, they were eventually, after a years long battle, driven out or destroyed by the undead. The undead, however, were decreased in number by this conflict, and since that time, as a result, several attempts have been made to re-inhabit the complex; a few groups, as well as many animals (eager to access the food that grows within) have made some headway, but no one controls the space.

There are four basic varieties of Architecture- natural, lizardman, minotaur and lich; although, some other groups and individuals have made modifications as well. Minotaurs like to decorate, so there are a lot of minotaur busts, murals, busts bas-reliefs. Minotaurs also like to bathe, so there are lots of baths, some of which were converted into vats or something else by the lizardmen. Furthermore, the lizardmen planted a lot of food fungus and algae on the walls, they also seeded pools with plankton, algae, fish and other stuff. They constructed mostly with metal and plastic, their machines are everywhere. Strangely, enough they were also fond of murals. 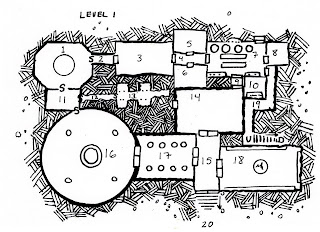 Click for larger image.
Posted by Aos at 7:19 AM