Carry Me Home to the Fire

The undead are a tremendous problem in The Metal Earth. The magical and technological detritus of a thousand, thousand different vanished civilizations have created a world in which a corpse can rise up to terrorize the living in any number of different ways. Coming back from the dead, or rising, as it is popularly called is one of the greatest fears of the age.

This problem is primarily addressed through the near universal mortuary practice of cremation. However, people don't always die at home or even within the confines of the cities.
For most sentients it is nearly unthinkable to allow a loved one to face the possibility of risings and families will often impoverish or even bankrupt themselves to make certain that a relative's corpse is recovered and carried home for burning.

Rates charged for corpse recovery vary from place to place; 500gp is usually the starting price for any such expedition; sometimes if the body has been lost in an especially dangerous region the price can exceed ten times this amount.

Obviously, corpse recovery can provide opportunity for adventurers looking to earn a little (or a lot of) coin. However, aside from the risk inherent in travel outside the cities, there is also a social stigma. Corpse handling is seen as the lowest sort of task and those that engaged in recovery may find themselves unable to spend their coin in respectable establishments as they will have been relegated to the lowest caste of society- the Burners, perhaps the only group seen to be less desirable than humans (although not nearly as subject to hate motivated violence).

Special thanks to Boulet at the therpghaven.
Posted by Aos at 6:35 PM 2 comments:

Right now, if I were going to add an outer space element to my Metal Earth home game, space craft rules would be handled by a combination of Spelljammer and XXVc; earth would be the Metal Earth, Mars would be Athas (Dark sun), Venus would be Carcosa or Athanor and counter earth would be Planet Algol.
Posted by Aos at 12:13 PM 5 comments:

XXCv: What is in the box


So as stated in my previous post, I picked up a copy of Buck Rogers XXVc last weekend. I have vague memories of seeing this game when it was released, but I wasn't sure why I never picked up a copy at the time. I have always been mad for this kind of thing. As it turns out, the game was released in 1990, arguably the craziest year of my entire life (although the years that bracket it are also fair contenders for this title). Furthermore, I think I may have been put off of TSR product by this point for some bullshit early 20's reason or another.

I've flipped through all three books, and I'm about a third of the way through an in depth read of the first book. My initial impressions are extremely positive. The rules are AD&D based- an obvious bonus. Additionally, I'm a huge fan of Solar System SF and that is what this game is all about. I'm pretty sure I could tweak the rules for this game to emulate the settings from books like EE Smith's Space hounds of the IPCC, Bester's The Stars My Destination, Larry Niven's early Known Space stuff, and dozens of other things that I'm too lazy to type the titles of- or my own custom Solar System setting.

Anyway, onto the unboxing pics!


All these photos are crap. I can't cipher how to adjust the white balance on my camera, and my secret undersea base seems to be a less than ideal environment for taking pictures. Furthermore, autofocus sucks. I will be happy to rephotograph anything that anyone would like a better look at.
You can click on all these if you desire a larger/blurrier version.

First up the box. It is big and thick. 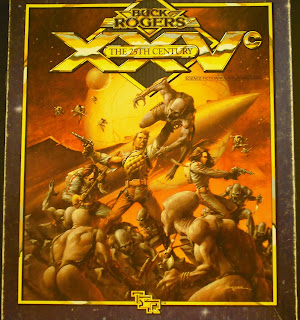 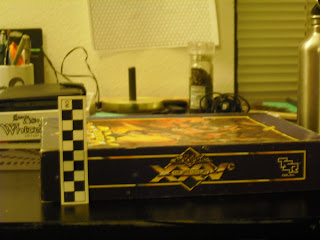 And it has a lot of stuff in it:
There are three books: 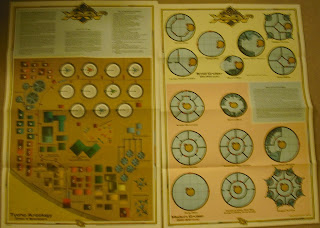 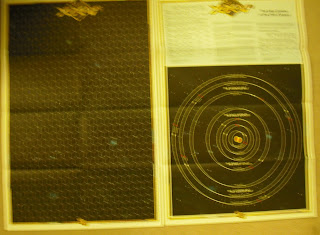 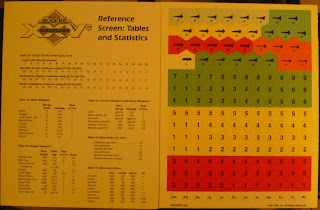 Several 8 x 11 planet map/stat (map on one side, stats on the other) cards.

A bunch of ship cards of the same size.

And this thing, which appears to be some sort of game aid designed to help with figuring out interplanetary travel time, fuel requirements and other junk.

Well, I have to say that all of this creates quiet an out of the box experience. It is a really nice assortment of stuff. I am not certain, however, how much table time some of the ship cards and what not would actually get. I'd have to give the game a spin in order to know that.
Posted by Aos at 7:28 PM 1 comment: 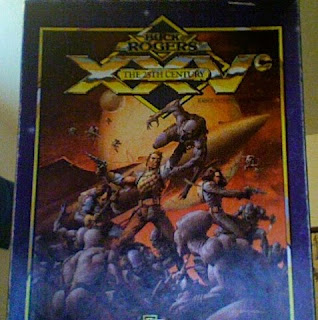 My best friend Scott and I did a long playtest (about 6 hours) of The Metal Earth rules during my visit to Denver last weekend. The entire thing was completely spontaneous. Scott ran three player characters: two adventurers (a minotaur and a grey) and a shae Sorcerer, who was the leader of the expedition and in search of magical treasure. Anyway, the party explored the Tower of The Changer * in its entirety and made their way down into the Forgotten Depths* wherein the party found a teleportation pool (Hex 0703) that led back to the city of Ssaur *. We tried out new spells, several of the character generation options, combat and some other junk. It went very well, and there is nothing like running a game with the rules scattered across a couple of books and several sheets of note paper to help one get an idea of how to put together a final product.
So the work continues, although I now have a complete outline and a good deal of almost every chapter written.

*Available for free on the left.

The other awesome thing that happened: I picked up a copy of the Buck Rogers XXVc game. I missed this game when it was released and I've been curious about it ever since- to the point that along with Gamma World 1e it is on my short list of games that I will purchase on sight.
As far as my copy goes, the box is worn, but it really doesn't look like anyone ever opened the game books and all the chits are still in place. Beyond that, If anyone is interested I could probably be talked into doing a more thorough review of the thing.

In other news, I can't say why, but the online gaming world is kind of bringing me down lately. I've given up on forums completely and sadly some blogs. I'd point out what bothers me (it's not politics, btw) but then I'd have to suffer through comments where people tell me stuff we ALL already know (i.e. people can post what they want on their blogs).

Here's some "Art" click on the images for larger versions.

This one I've posted before, but this is a much better scan: 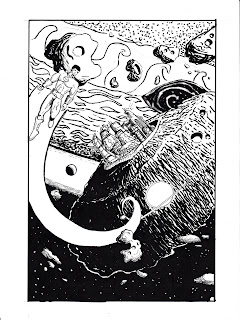 Here are the PCs from my ICONS game Doc Crucible (left) and The Fire Knight (right): 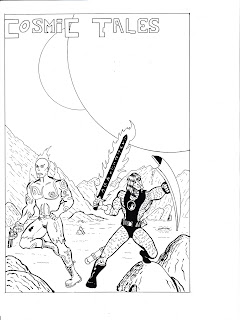 And some rushed drawings of next week's villains (The Round Up Gang): 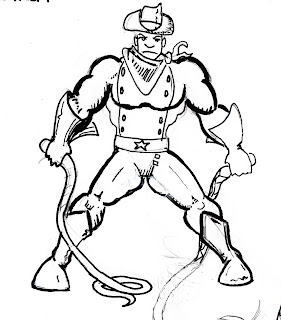 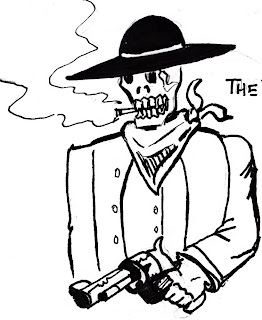 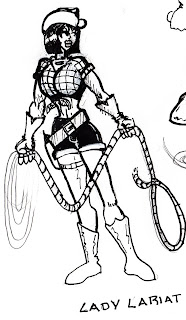 Theses guys are bounty hunters who are hunting down the PCs (who have been accused of being Soviet collaborators [the game takes place in 1950]) There are a couple more of this crew: Kid Snake Eye and Pappy (think like the Hulk, but a redneck feller); I haven't gotten around to drawing them yet.
Posted by Aos at 12:50 PM 6 comments: