Beneath Skull: The Facility


The Facility:
A vast Ziggurat of pipe work and concrete, the Facility dominates the region of the True Sea directly beneath Skull. The true nature of the monolithic structure is unknown. Delvers of the underworld and sailors of the True Sea have reported sightings of man shapes upon the walls of the great edifice, but no one has spoken to its inhabitants or is aware of their strange purpose.
It is thought that the Facility exists to purify the water of the True Sea, but the veracity of the claim is unknown. What is true, however, is that the Facility’s pumps carry the water on which Skull depends for its survival from the sea and up to the city.  No one knows how long the pumps have been going or, for that matter, when they might stop.

Built by a human organization known as the Agency, the Facility dates from a short time before the arrival of the Welt. It is combination storage and research facility, curating weapons and other technology as well as hosting a range of laboratories designed to facilitate many different avenues of research.

Although the marks of deep time are easily seen in the ancient, cracked and crumbling concrete, the rusted pipes and omnipresent fungal infestation of the place, the Facility is not derelict.  Gene engineered monsters patrol the endless network of corridors and rooms and a variety of semi sentient humanoid drones maintain the machines. However, aside from the group’s ubiquitous symbol, little remains of the Agency or the culture that spawned it, but for the powerful and insane Dr. Warp. Unquestioned overlord of the Facility and its denizens, the doctor rules it all and as a descendent of the founders, represents the place’s last vestige of humanity, but in truth, he hasn’t been properly human for a very, very long time.
Posted by Aos at 11:35 AM 1 comment:

Email ThisBlogThis!Share to TwitterShare to FacebookShare to Pinterest
Tags: Anvil of the Sun, Satan's Spine, Skull, The Metal Earth

Skull is alive with conflict and strife. Arrayed beneath Coil, a myriad of organizations, institutions and societal estates struggle against one another, competing for resources, power and, ultimately, survival. These struggles manifest as a pervasive network of striving discord; this bitter and brittle lattice binds the city together; and friction between its components, as they twist and trespass against one another, provides the fuel that runs the engine of Skull’s society.  To understand Skull, one must understand these entities. The following section will look at the most important of Skull’s social constructs, but only in a cursory fashion. It shall, of course, be taken as read that each is, in reality, a universe in and unto itself, possessed of nuances both varied and numerous, the detailed examination of which lie beyond the scope of this inquiry.

Airlords:
Arrogant and xenophobic, the airlords represent the largest independent shae population of Satan’s Spine. No clear indicator exists of the number of either the airlords or the ships in their fleet. What is known, however, is that the airlords are possessed of an advanced and refined airship technology, which they very much do not wish to share. Not only do the airlords wish to maintain sole proprietorship of their airship technology, they, as a matter of policy look upon any independent effort to gain access to the skies with a more than mild disfavor. Traditionally, the airlords have shown they will do whatever necessary to retard or obliterate the progress of any such projects and murder all those involved, as discretely as possible, of course. They currently maintain an embassy in the Forecourt, the main purpose of which is, at least superficially, to further the interest of the lively luxury/sumptuary goods trade, which they engage in with Coil’s priests. As to their feelings regarding Coil’s nascent airship program, none among the embassy contingent has seen fit to offer an opinion official, or otherwise.

The Herd:
Nuphal are large sentient pachyderms that, operating as a collective of clans, known as the Herd, control overland trade throughout the southern half of Satan’s Spine. If it is a staple of life and cannot be produced within Skull, it comes to the city via nuphal caravan. Famed for delivering goods intact and in a timely manner, the nuphal clan caravans boast an excellent reputation. Notably, the Herd represents a key link in the flesh trade. In fact, many worthies in Skull and beyond consider the nuphal caravans the only sensible way to transport slaves, an onerous enterprise at best, but of which the nuphal are the undisputed masters.

Each clan runs a caravan. Currently, twelve clans, each linked to the others through a weak form of ritualized telepathy, are thought to be in existence; each caravan follows the same route, known as the Golden Road, at evenly spaced intervals; excepting the duration of the Season of Storms, a new caravan arrives in Skull every month, usually before or within days of the departure of the most recent previous caravan. Individual nuphal act as caravan organizers, porters and guards. Additionally, the clans employ humanoid agents to further their ends within settlements and mercenaries to help guard their expeditions. Despite the Herd’s use of sell swords, nuphal warriors know few rivals in their capacity for destruction, and, although rare, there are powerful sorcerers among the ranks of the clans.

Currently the Herd is in a dispute with the Brotherhood of Blood regarding pay rates and labor conditions. Their relationship with the Slavers is currently without strife, but trouble may be brewing.

As with the Airlords, the Nuphal are less than enthused in regards to the Worm’s airship program, fearing that it might lead to a compromise of their near monopoly on trade with the city.

Brotherhood of Blood
The Brotherhood* of Blood is a mercenary guild. Skull is their power base as they have a special relationship with the Ministry of Control to whom they supply a large number of warriors. At any given time, the MoC employs roughly two thousand Brothers to act as bodyguards, fill positions in the watch and the city’s small standing army/expeditionary force, the Worm Guard.
Most of the mercenaries within the city are supplied with the necessary unguent and given lodging with their assignments. However, the Brotherhood provides lodging and other services for its members in the Forecourt, at their large compound: Murder House; administrative offices and training facilities are also located therein.

Currently the Brotherhood is at odds with the Herd regarding contractual rates and obligations. Business between the Herd and Brotherhood, however proceeds, for the most part as normal.

The regional presence of the Brotherhood of Blood is under the command of Field Marshal Krogg, a venerable Sasquatch, veteran of 100 battles; a seeming incorruptible individual, who apparently wishes for nothing more than to maintain the status quo and lose as few of her sell-swords as possible in the process.

(*misnomer as the “Brotherhood” consists of  both males and females as well as many individuals of several other less common variations).

The Rogues’ Knot
The Rouges’ Knot, or ‘the crew’ as it’s sometimes called is a criminal organization elements of which can be found virtually in every civilized corner of Satan’s Spine.  However, what ever power the crew wields elsewhere, in Skull, the great organization is represented by a loosely knit band of barely competent operatives and semi-independent perpetrators, who, at best, manage to stay just one step ahead of the Worm’s Watch.

The Knot’s strongest beachhead within the city is within the back market community centered in the neighborhoods surrounding the Kennel.  Conflict between the black market vendors, the cutpurses and the blackguards serve to keep the group focused on internal concerns and almost a non-factor in city politics.

However, the leaders of the Knot in other cities watch and wait for a chance to move into Skull and establish a new power base.

The Slavers:
The Slavers have a large presence in Skull. Most of the slaves come from their pits on the island of Chain in the Stained Sea, as products of either their breeding or raiding programs. Many of the slaves are brought from lands far beyond Satan’s Spine and cannot speak the nameless ancient language of the region, and never seem to learn more than the rudiments of the tongue no matter how many years they spend in service.

The Envoy of Eyes is the official title given to the Slavers’ chief representative in Skull. Elegant and cruel, the Lady Brand, a peerless huntress and an assassin of legendary skill, is the current bearer of this honor; thus, she wears the Crown of Eyes, a circlet of metal set with ten evenly spaced, living eyes, giving her a 360º field of vision.  It is said that Lady Brand owes her skill to a Slaver breeding program gone terribly wrong. The truth of this claim is unknown. As with all other slavers, Lady brand dresses in furs at all time, even during the hottest weather, never showing her face. Whatever the case, whatever her secrets, Brand is a being of immense power.

As with the Brothers of Blood, it is in the best interest of the Slavers if the status quo remains unchanged. They are quite willing to spill blood to further this end, but will not put themselves at too great of a risk, preferring to ride out change rather than risk over much.

On a personal note, I spent the last week plus walking across the desert. It sucks and I need to write some rules to mirror that. For one thing, consuming a gallon of water a day would still leave you dehydrated.The good news is you hardly ever have to stop for a piss.
Posted by Aos at 11:28 AM No comments:

Email ThisBlogThis!Share to TwitterShare to FacebookShare to Pinterest
Tags: Anvil of the Sun, Satan's Spine, Skull, The Metal Earth 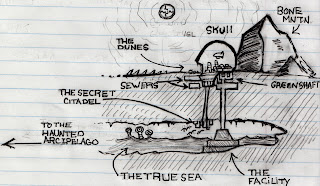 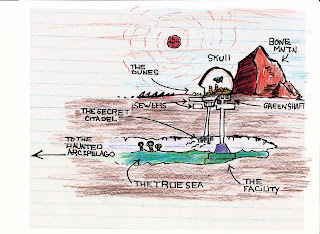 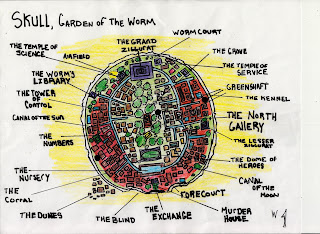 The more I work on this thing the weirder and longer it gets.
Posted by Aos at 11:12 PM 8 comments:

Email ThisBlogThis!Share to TwitterShare to FacebookShare to Pinterest
Tags: Anvil of the Sun, Maps, Satan's Spine, Skull, The Metal Earth

Art for the Metal Earth, from the Dungeon of Signs

Gibbering Mother at The Dungeon of Signs has done a drawing of the city of Skull for me as part of art trade. It's awesome! Check it out Here. Go now!

In other news I'm running behind on the big project I'm doing, and it will take me at least another two weeks. It will be a complete write up of Skull with art, maps drawing, critters, NPCs and some tables.

Located deep within the Anvil of Sun and ruled over by the devious and gleefully malignant centipede creature known as Coil, Skull is a city built inside the final remaining relic of a long dead god. Despite Skull’s location at the center of the waste, cool air flows through its neighborhoods and lush tropical growth looms over its sparkling canals; further, the city boasts some of the most productive agricultural caverns (green shafts) on the continent.  This fecundity can be attributed in part to vast subterranean sea located far below Skull’s bustling streets, and on which the plants and people of Skull depend upon more than any other resource for their survival. It is perhaps the largest source of untainted water on the continent, maybe the world. Another contributing factor is the vast god skull itself; its osseus dome is semi translucent, blocking the worst effects of the sun, yet allowing sufficient light through to nourish the gardens below.
Posted by Aos at 8:03 AM 3 comments: