The move is over at long last, so (semi) regular posting will now resume. I want to thank everyone for their feedback on the maps I've been posting.

Anyway, lets get on with it!

These large birds (wingspan 15 feet) travel in hunting groups of three. During the summer months Icyopteryx primarily nest and hunt in the mountains; however, during the winter and during freak summer snowstorms, they will descend to the lower elevations in search of prey.

Icyopteryx hunt in groups of three (known as triads) and will not hesitate to attack large prey animals. They have an uncanny ability to see and navigate during the heaviest weather and will often accost prey during the peak of a blizzard.

Special Dive: prior to the first round of attack Icyopteryx will climb high and then dive, adding the benefit of inertia to their strike and therefore doing double damage.

Na-mammoth are large mammal like creatures, which live year round on the Wasted Plain and in the Dire Hills. They are omnivores and will eat virtually anything. A Na-mammoth can breath 40 foot cone of fire, 15 feet wide at its base, twice daily. During winter months this ability is often used to soften the turf in order to access buried plant food .

When the Na-mammoth dies, the mammoth men eat its corpse. Over the next several days they work in concert to spread their excrement over a small section of tundra. The high acid content of their dung softens the earth. Once this task is complete, the creatures engage in a horrific orgy of violence, during which, they kill and eat one another. The final survivor burrows its way into the softened earth, and generates a mucus sheath around its body. After this, it hibernates for 6 or more months and transforms; a fully formed juvenile na-mammoth emerges from the earth at the beginning the following spring.

For game purposes, each na-mammoth is accompanied by one mammoth man per hit die.

The larval form of Na-Mammoths, these creatures are roughly humanoid in appearance, although they sport thick coats of coarse hair and large upward thrusting tusks. They are possessed of a rude intelligence, but have no culture or language and exist only to gather food for the Na-mammoth that spawned them.


Next time: I haven't a clue, really, but, possibly, a more detailed look at Madling Isles. 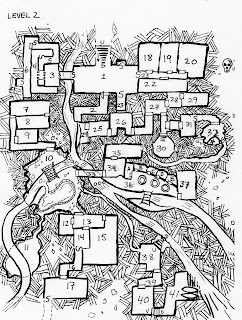 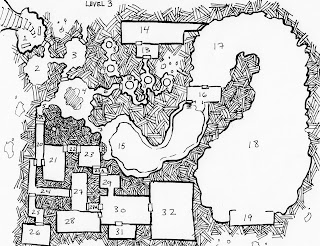 I'm not sure what there is to say really. I've finished keying level 1. I think I'd like to play it before sharing it here. I'd do so via one of those funky google+ games that are all the rage right now, but I'm in the middle of organizing a state to state move.
Posted by Aos at 7:53 AM 5 comments: