Honor of the Dwarves maps old and new

I think I’ll go in color for a number of illustrations of in HoD. Tangentially here are some old ass maps that I may just go ahead and use. 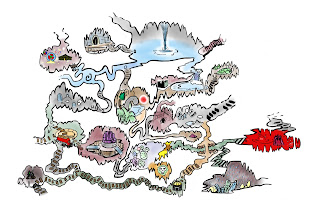 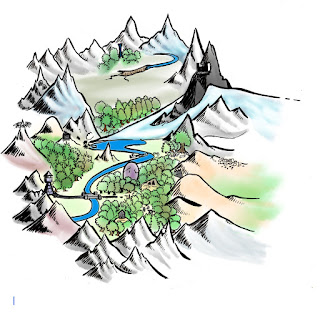 And the newer but unscanned map of the setting 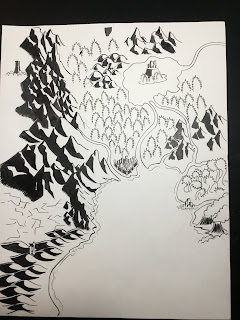 The bad news: No way in hell can i finish Haunted Islands by holloween. The DTRPG learning curve ate a month of my time. So it’s back the Dwarves for a while.

WEG SWRPG’s astrogation rules are the finest I’ve ever seen, but they are not conducive to map making.
Briefly: travel is measured in units of time, as opposed to units of distance. Hyperspace ships travel at near infinite velocity. Travel time is a product of the vagaries of interstellar space such as rogue planets, gas clouds, asteroid fields, space monsters and whatever else one might find in a galaxy far far away. Routes between planets are designed to avoid all such hazards. However, it is possible to take a shorter, i.e, faster route.
Travel times (Standard Duration) to the worlds important to the OG trilogy are presented in the WEG rule book in tabular format, not unlike a train schedule. There is nothing like a star map and no mention of maps at all. However, it is possible to travel without a preset route, and it is also possible to get somewhere more quickly (by using a shorter route) than the standard route. So when Han Solo says he did the Kessel Run in under 12 parsecs, he means he did it fast, and it makes perfect sense.

Moving on to some of the source material for my own games- in the Goodwin/Infantino run of the original Marvel Star Wars comic, in the space between the Star Wars and Empire Strikes back, Han, Luke and Leia are tasked with finding a world to replace Yavin as the rebel base. I love this idea, and I used it in my first SW game- but with no star chart. I feel like such a chart is kind of central to a world search type campaign.
I feel that deciding on routes and when to take chances and where to go next is an important part of player agency.
So my idea for my next game is to provide the players with a chart and a lavishly illustrated planetary encyclopedia and set them off to search an entire 20 system sector for a new base.
Here is my ugly ass proto chart.
The number to the left of the brackets is the standard duration of travel between two worlds the number in brackets is the actual distance between the two systems in parsecs.  (I’ve not finished with these so only a few have brackets). No rule changes necessary, but you can’t always get there from here directly. Sometimes you have to pass through the system with the imperial garrison. Note I have equated one day’s travel with 1 parsec of distance- although in practice it can work out to much less. 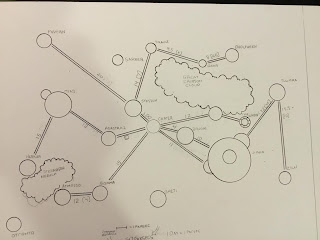