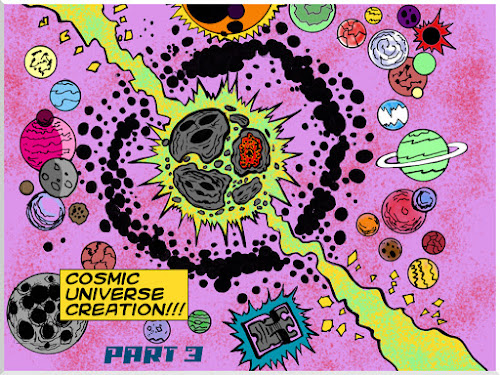 The One Page approach:

This method of campaign construction is focused on creating something playable and rich, without cutting corners, but also without engaging in unnecessary labor. To that end, everything we make will be easily usable at the table. What then are we going to make? Primarily: timelines, note-maps, NPCs, and fact sheets (detailing adventures, artifacts, aliens, institutions and other disparate elements of play) - all of which will be scaled in such a way that everything necessary to game play will be contained on one page in each instance.

In cases where the subject matter is too broad to cover on one page, it can be broken into smaller components of a size more appropriate for one page. However, an overview page is often helpful, with component pages nested inside it, like Russian dolls. Maps provide an easy example; starting from the top down, I might make a map of the galaxy; a map of one of the planets in the galaxy; a map of a region of that world; a city in that region; and then down to a building within that city. At each level of scale I should be able to provide all the information necessary to use the map in play on one page.

After, as we discussed in the previous entry, acquiring a hazy sense of your game universe's history and current (at the start of the campaign) state, it is time to begin to make something solid and playable. We will start with a note-map (see below for an example). Knowing about the theatre of action will give insight as to the sort of things that exist and go on in the universe. Below is the cosmic scale map I have worked up for my own universe "Earth ?" A cosmic scale map is almost more of an ideational diagram than a true map. The purpose is to throw down as many ideas as you can and scatter them through space; again consider the example.

As you generate your map, it may be helpful to work up a basic timeline as well. Each should provide ideas for the other.

The referee's skill as a cartographer is of absolutely no importance. Abstract scribbles will serve just as well as lovingly created color follies.

A word about fictional cities and the real world status quo. Fictional cities are one of the often derided elements of superhero comics. However, properly used wholly imaginary cities solidify and individualize the game world as well as the place of the PCs within it. For example, Gotham city is linked with Batman forever and always, regardless of context. NYC is linked with expensive cigarettes, Broadway shows and pizza. Further, do not fall into the trap of allowing your imagination to be constrained by real world geography, politics, or technology. The constraints of editorial mandate and long form story telling keep Reed Richards from changing the world; your PCs need not suffer under the same restrictions.

A rough map of the Earth? Universe. 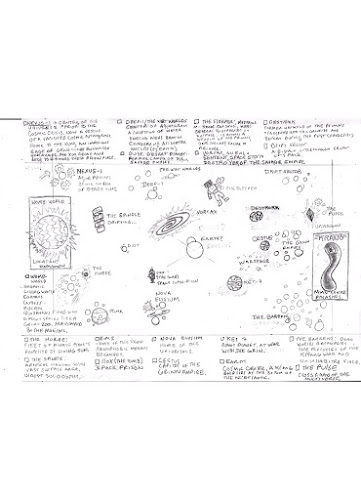 A finished version of the same map. It is argualbly prettier, but no more useful. Maps like this can be made with basic materials such as pencil, paper and/or with virtually any media you like ranging from crayons to photoshop. 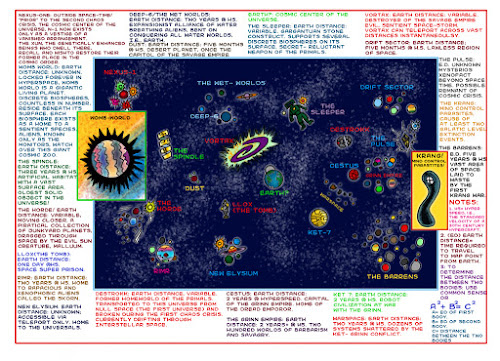 As stated and hopefully demonstrated above, these maps don't require any special skills or gear to make. If you can do circles and boxes, you can do one of these. However, some materials that might help: 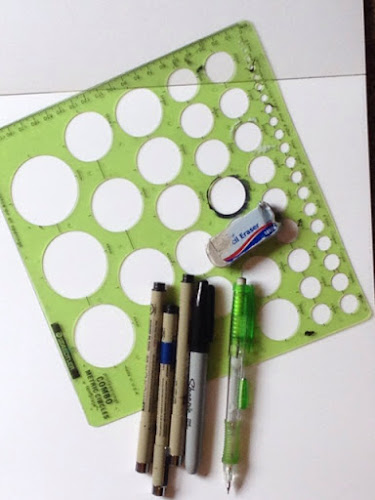 White plastic earaser- there is no substitute.

Whatever else strikes your fancy, really.

Homework: Read either Crisis of the Infinite Earths #7 for a specific example of supers universe history (likely at your library as part of a larger collection or comixology) and/or Fantastic Four 74-77 (on Marvel Unlimited/comixology) for a unique view of the Marvel Universe at many different levels, and an expansion (or contraction?) of the setting within setting nesting concept mentioned above. 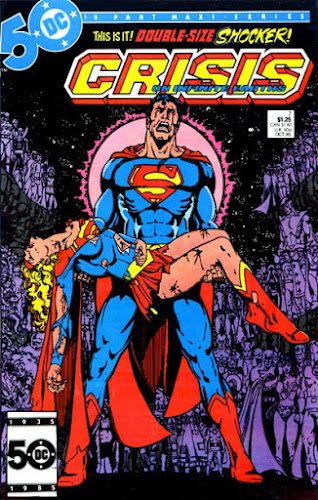 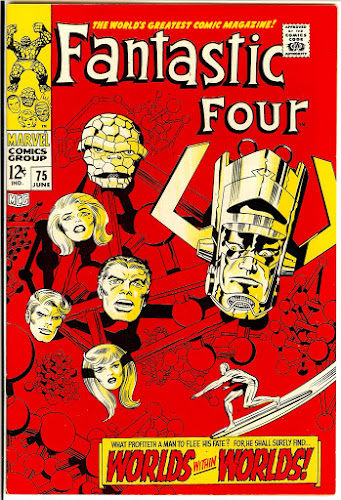 Next time: a nested map or two, and time line creation steps/examples.

Email ThisBlogThis!Share to TwitterShare to FacebookShare to Pinterest
Tags: EARTHQ

I have a second blog the topic of which is my struggle to not be such a shit artist- and motherfuckers, let me tell you, it is a fucking struggle. Comments are open over there, mostly in hopes of eventually getting some input and critique.

Cosmic Tales: a blog about Failure.

Email ThisBlogThis!Share to TwitterShare to FacebookShare to Pinterest
Tags: failure, the other blog

I still have three left to illustrate, and. I am conflicted as to whether or not to add in some combat tricks, like disarm, formated like the forager's skills, for the skeleton. Or maybe give the martial classes the ability to move around bonuses to AC or to hit depending on what they want to focus on from round to round. However, I want to keep the skeleton dead simple (see what I did there?) for players who don't want to fuck with a lot of options.

Also, in AoL, class is caste is race.

I will reskin the dwarf as either frankenstein monster guys or cave men- email me if you have a strong opinon.

Also email me if you want this as a .pdf. 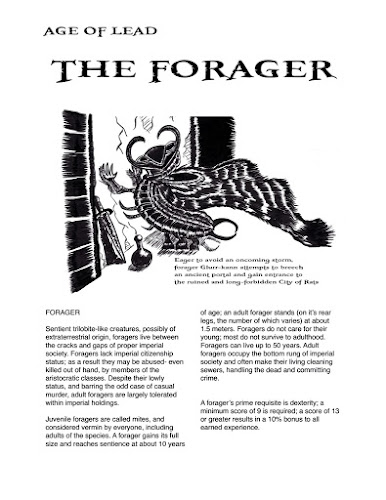 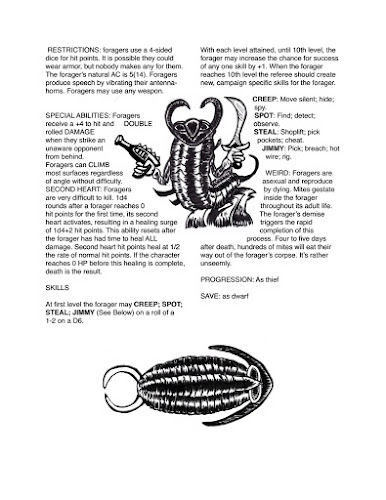 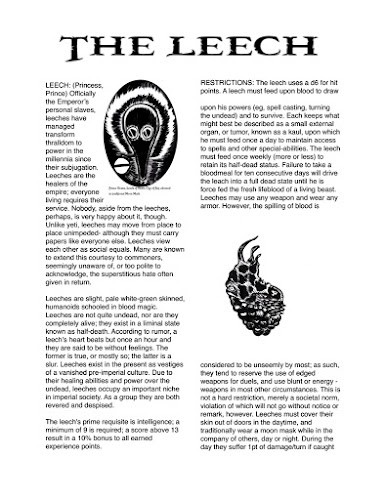 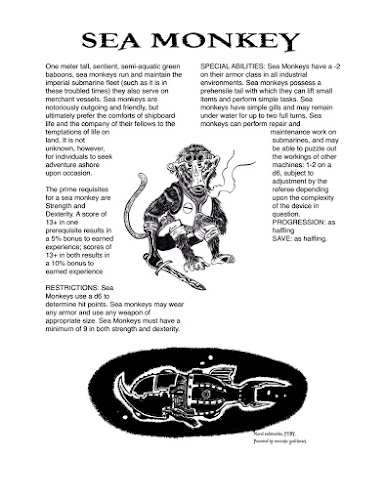 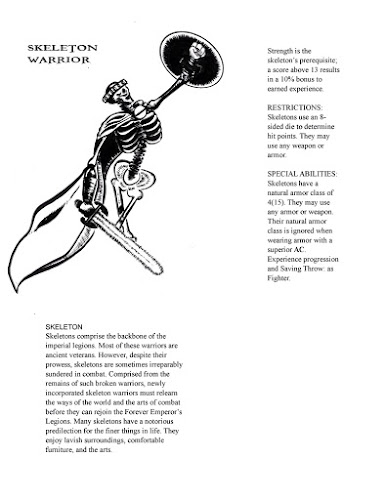 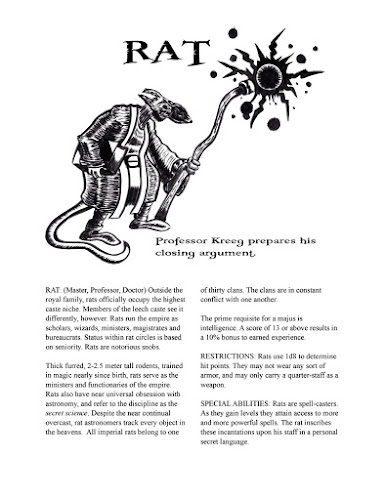 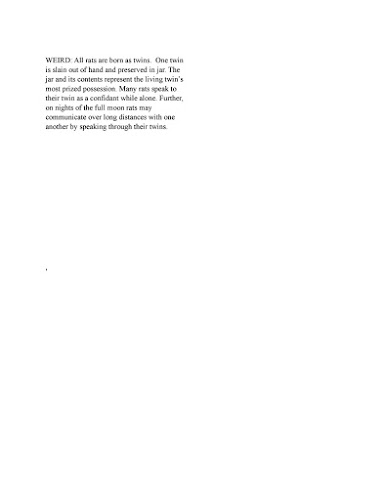 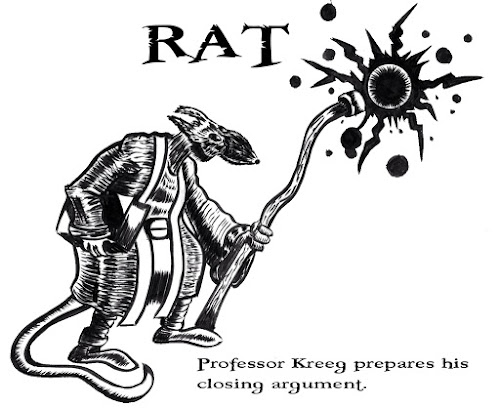 RAT: (Master, Professor, Doctor) Outside the royal family, rats officially occupy the highest caste niche. They see themselves as the best imperial society has to offer. Members of the leech caste see it differently, however. Rats run the empire as scholars, wizards, ministers, magistrates and bureaucrats. Status within rat circles is based on seniority. Rats are notorious snobs.

Thick furred, 2-2.5 meter tall rodents, trained in magic nearly since birth, rats serve as the ministers and functionaries of the empire. Rats also have near universal obsession with astronomy, and refer to the discipline as the secret science. Despite the near continual overcast, rat astronomers track every object in the heavens. All imperial rats belong to one

of thirty clans. The clans are in constant conflict with one another.

The rat's prime requisite is intelligence. A score of 13 or above results in a 10% bonus to earned experience.

RESTRICTIONS: Rats use 1d8 to determine hit points. They may not wear any sort of armor, and may only carry a quarter-staff as a weapon.

SPECIAL ABILITIES: Rats are spell-casters. As they gain levels they attain access to more and more powerful spells. The rat inscribes these incantations upon his staff in a personal secret language.

WEIRD: All rats are born as twins. One twin is slain out of hand and preserved in jar. The jar and its contents represent the living twin’s most prized possession. Many rats speak to their twin as a confidant while alone. Further, on nights of the full moon rats may communicate over long distances with one another by speaking through their twins.

Lots of composition issues here. I need to redraw, obviosly. The idea is to make something for both AoL and B/X Cosmonaut. SHED is the PC base town. 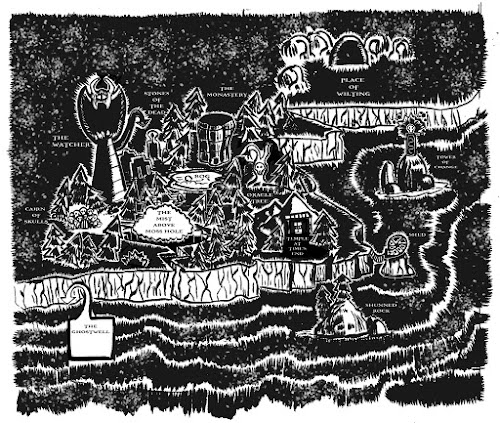 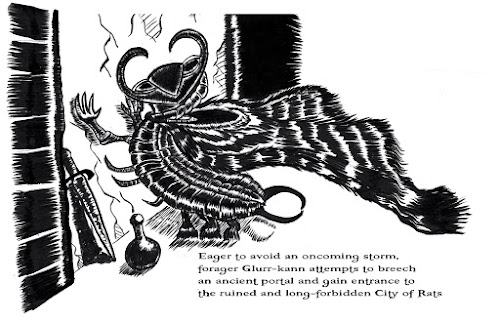 Sentient trilobite-like creatures, possibly of extraterrestrial origin, foragers live between the cracks and gaps of proper imperial society. Foragers lack imperial citizenship status; as a result they may be abused- even killed out of hand, by members of the aristocratic classes. Despite their lowly status, and barring the odd case of casual murder, adult foragers are largely tolerated within imperial holdings.

Juvenile foragers are called mites, and considered vermin by everyone, including adults of the species. A forager gains its full size and reaches sentience at about 10 years of age; an adult forager stands (on it’s rear legs, the number of which varies) at about 1.5 meters. Foragers do not care for their young; most do not survive to adulthood. Foragers can live up to 50 years. Adult foragers occupy the bottom rung of imperial society and often make their living cleaning sewers, handeling the dead and crime.

A forager’s prime requisite is dexterity; a minimum score of 9 is required; a score of 13 or greater results in a 10% bonus to all earned experience.

RESTRICTIONS: foragers use a 4-sided dice for hit points. It is possible they could wear armor, but nobody makes any for them. The forager’s natural AC is 5(14). Foragers produce speech by vibrating their antenna-horns. Foragers may use any weapon. 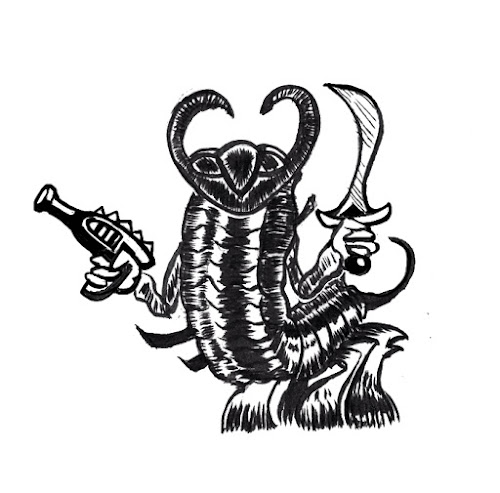 SPECIAL ABILITIES: Foragers receive a +4 to hit and DOUBLE rolled DAMAGE when they strike an unaware opponent from behind. Foragers can CLIMB most surfaces regardless of angle without difficulty. SECOND HEART: Foragers are very difficult to kill. When a forager reaches 0 hit points for the first time, its second heart activates, resulting in a healing surge of 1d4+2 hit points. This ability resets after the forager has had time to heal ALL damage. Second heart hit points heal at 1/2 the rate of normal hit points. If the character reaches 0 HP before this healing is complete, death is the result.

With each level attained, until 10th level, the forager may increase the chance for success of any one skill by +1. When the forager reaches 10th level the referee should create new, campaign specific skills for the forager.

WEIRD: Foragers are asexual and reproduce by dying. Mites gestate inside the forager throughout its adult life. The forager’s demise triggers the rapid completion of this process. Four to five days after death, hundreds of mites will eat their way out of the forager’s corpse. It’s rather unseemly.