The Old Islands Three: another version of the map.

Not set on names yet, and this is sloppy, so I'll likely do another version on hex paper. Larger version: here. 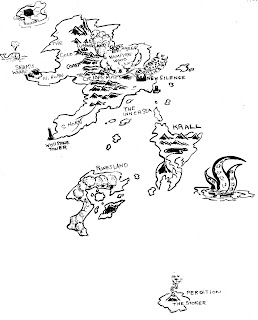 Tomorrow: area descriptions and critters (maybe).
Posted by Aos at 10:59 PM No comments:

The Old Isle:
Books in use: Labyrinth Lord; Tales of the Grotesque and Dungeonesque; Realms of Crawling Chaos; LL Advanced Edition Companion

Some influences: Moby Dick, by Herman Melville; The Crucible by Arthur Miller; HPL fiction; Solomon Kane Stories by REH; The Monk by Mathew Lewis; Castle of Ontoranto by Harold Walpole; Dracula by Bram Stoker; Frankenstein by Mary Shelly; Gotham by Gaslight and Hellboy by Mike Mignolia; The Crooked Man by Mike Mignolia and Richard Corben; Corben horror comics;  Gangs of New York;  Sleepy Hollow;  the scientific revolutions of the 19th century; the demise of the geocentric model of cosmology; the Torah;  the rise of the Creationist movement and the implied logic behind it.

Character Generation:  Select a race from RoCC; a class from the AEC; roll a background and a dark secret from Tales of the Grotesque and Dungeonesque

Myth (?): Long ago, annoyed by the chatter of his worshipers, the Entropic Lord destroyed the world with a great deluge. The peoples of today’s world are descendent sof the flood’s survivors.

Although, with exception of a few human settlements, the Old Isles were largely uninhabited when first discovered some 600 years ago, evidence of a former occupation remained. Ancient tumbledown ruins lay inland, sunken structures were and still are, seen along the coasts and even upon the floor the open ocean.

Settlers from the Urveon Continent arrived en mass roughly 50 years after the island was discovered, bringing their religion, (the Humble Church of the Hidden Way) and semi-industrial technology with them. The islands’ human inhabitants either fled into the woodlands, or assimilated with the new masters of the islands. The latter process turned out to be surprisingly seamless, perhaps due to the church’s perspective that all mortal beings are equally despicable in the eyes of the Entropic Lord and must be brought into the fold if his attention is to continue to be averted.

200 years have past since the last contact with Urveon. No ships sent in that direction return.

Industrialization has taken off in the last 50 years.

Population: the total population of the islands is ~1 million, a full 80% of the population lives in the industrial city/port of Stoker on the North Island (place holder name).

Races (in order of population size): White apes; Sea Blood; Humans; Sub Humans (not an actual species, but the victims of a communicable curse).

Religion:
The First Commandment: Thou shalt not make thouself known to the Entropic Lord.

The Humble Church of the Hidden Way does not worship the Entropic Lord. Instead it teaches the doctrine of spiritual stealth. The ultimate goal is to keep the Entropic Lord from paying attention to the world and its inhabitants, lest he bring about another flood or a like disaster. Clerics of the order actually cast spells in an effort to deplete the world of magical energy. Magic Users however violate the laws of space-time by bringing additional magic into creation when they cast spells and are thus despised as witches and the enemies of life.

Prayer is the ultimate blasphemy, as it is an attempt to engage in direct dialogue with the Entropic Lord; and the true name of the entropic lord is the Church’s greatest secret. Only the most depraved individuals would whisper it.

True believers spend at least two hours a day engaged in a meditative process known as purging in which they attempt to blank out their thoughts and suppress their personality in an effort to keep the world quiet and once again, avoid the attention of the Entropic Lord.

Apostasy is however on the rise as “reason” and science attempt to define the world in non supernatural terms within educated urban circles and secret pagan religions based upon faith and worship fester along the backstreets and in the countryside.

The outward manifestation of all this is almost identical to hard core Puritanism. Everybody wears black all the time too.

Weather: The Old Isle lie deep in the southern hemisphere, but are warmed by a jet stream type wind. The great ocean known as God’s Gulf is extremely turbulent and stormy. 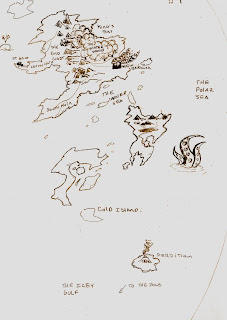 Anyway it occurs to me that it might be kind of fun to chronicle the development of this thing over the next couple of days.  If i get the time, I'll post another version of the map and some particulars later tonight.
Posted by Aos at 12:19 PM No comments: