Burnout, thoughts on comics, two weapon fighting, Helltoad, and so on

Well, it appears to be fading now, but sometime in May, I experienced a bit of RPG burnout. I still managed to keep my semi-weekly ICONS game afloat, but I kind of lost interest in doing any more than that. I think if I hadn't felt obligated to my players I would have canceled that too. I stewed for a week or so and then I started to focus my energy in a different direction. I allowed myself to become consumed by comics. I read some current Marvel and DC for a few weeks, but they quickly lost my interest. It's true that Infinite Crisis, The Sinestro Corps War and Final Crisis we're kind of cool as was Annihilation; ultimately, though, all these series, and several others I sampled were hampered by the need to tie into current continuity.
However, I got the big Jack Kirby Captain America Omnibus and the BPRD Plague of Frogs Hardcover for my Birthday; additionally i received The Walt Simonson Thor Omnibus for Father's Day. The first two are, of course, excellent; the third, however, pictured at the right, is the best 80$ you will ever spend on entertainment. 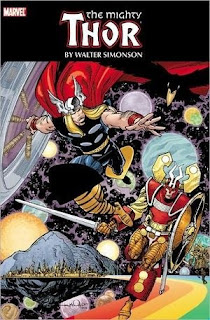 It is over 1200 pages of cosmic ass kicking, it opens with the Ballad of Beta Ray Bill and covers Simonson's entire run on the title (some 42 issues). One of my favorite things about it is that it has been completely recolored. The new colors really compliment Simonson's artwork, imo.

Well enough of that:

Two weapon Fighting:
At fourth level members of the Adventurer class can chose to fight with two melee weapons in lieu of using a shield. upon rolling a successful attack roll the player rolls two D6, the higher result represents the damage done by the combined attack. Two weapon fighter score a critical hit on a 19 or a 20. All other critical hit rules apply.

Hell Toad
Spell level: Sorcerer 3
Range: 240 feet
Duration: Instantaneous
Upon casting this spell the Sorcerer distends his jaw and vomits forth a 45 foot cone of screaming, burning, ravenous toads. The cone is roughly 10 feet wide at its base. Damge is 1d6/lvel of the Sorcerer. A successful saving throw results in half damage.


Anyway, I'm moving back to Denver next month and that means more FtF gaming and more play testing. So The Metal Earth Project is moving forward. The main slowdown right now is due to the fact that I'm trying to write up all the spells and I suck at that. My other major project right now is, for lack of a better term, a graphic novel. I've been thinking about it for years and actively working on it for a couple of weeks. I'll be moving in to my fourth page of artwork (I'm guessing it will be around 150 pages long) tonight. I have two main goals with this project: to improve my cartooning skills and to tell the kind of goofy cosmic super hero story I'd like to read. At the top of this post and below you can find Two pics (click to enlarge) of the main character, Doc Vulcan. Up top, he is transforming, below he is doing super guys do- or perhaps he is performing a dramatic reenactment of the last week or so of activity in the OSR blogsphere- you make the call. I'll also be using several public domain supers in the story. When I get about 50 pages done, I'm going to start posting it as a web comic.