Recently, I bought a lot of Bill Willingham's Elementals on Ebay.

Anyone who knows me at all, is aware that I spend a lot of time reading, thinking about- and making comics.

I’ve tapped into the first 17 issues. 1-5 are pretty cool. I’m not crazy about the ending of the first storyline, but I might feel differently on a second read.

Issue 6 launched a new direction as the Elementals become regular superheroes, which they kind of suck at.

7 is about the Elementals fame and thoroughly skippable.

9-12 are some spy stuff and an adventure dealing with some of the sorcerous fall out from the end of the first story line.

13 is a one in done dealing with an ice daemon.

14 is a downtime issue, normally I hate downtime issues, but this one is pretty neat, because it addresses the fact that they’re all actually undead, and can't really do downtime, all of which still seems like pretty cool and original to me thirty-five years on.

15 is a one and done, kinda, with a fight between Vortex and a dude named the Annihilator, who was one of the supervillains from the first storyline.

16-17 Comprise a vampire story. the vampire is an overweight nosferatu kinda guy, with some Incel issues. it's pretty straightforward and nothing to get excited about, but enjoyable for what it is.

Willingham is completely at the mercy of his inkers. The early and later issues look best. In between he’s got some amateurs on the job.

There are a two lines of narration/dialogue that would cause a kerfuffle today.

Bill’s hatred of anti-semites shines through in many places. It comes up a lot.

There’s also a Justice Machine/Annihilators miniseries in this pile. Justice Machine is an even deeper cut than the Elementals. I'll get to it eventually.

I find supers in a limited world like this, Savage Dragon, BPRD, and pre 1970’s Marvel more enjoyable. I guess I’d include Kirby’s 70’s stuff too, because that shit is set in the big two universes in name only.

Gaming connection: The Destroyers initially appears in two V&V adventures written and illustrated by Willingham. In typical fanboy fashion one of the letters in a later issue access Willingham of staling them from the module. Looking at the creators name is hard, I guess. 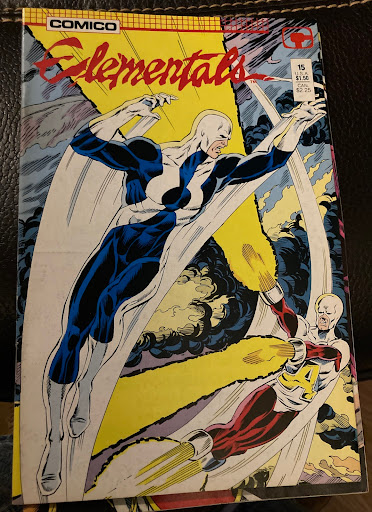