[Map] Province of forgotten Empire in The Divine Right Style 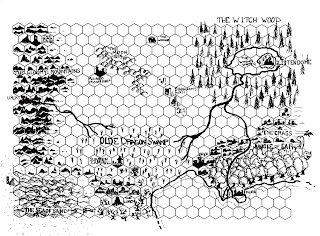 This took forever and I still have some things to do with it. It is a second version of the area map from this post.
Atlas Thingy

This is the baseline setting area for my ICONS game. 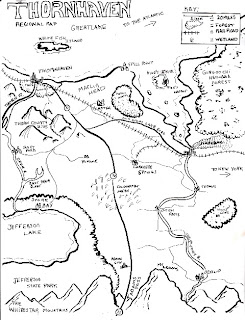 Somehwere near the Equator [map] 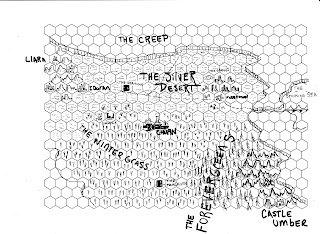 I've been playing B/X with my boys (ages 10 and 8) for about an hour each night for the last three nights.  They wanted to do something that was kind of like LoTR, which is definitely not my usual thing. However, I figured I'd reexamine my own prejudice's and give it a shot.

The basic set up, conceived of in about an hour, less the time it took to draw the map- Dark Mantel Tower (DMT) is currently ruled by the Witch King  (TWK henceforth) who has united the four gnoll tribes of the Grisly Mountains.  Mangor, the white ape, an apprentice to TWK has, along with a band of goblins, stolen the Golden Peacock from Glistendome, woodland fortress of the elves. The Peacock has the ability to answer one question truthfully every year at midnight on Halloween. After the theft, 9 out of 10 elves within The Great Wood fell into an enchanted slumber. If the peacock is not recovered by Halloween the elves will never awake. As ransom for the Peacock,  TWK demands that King Blogandorf IV, ruler of the elves, swear loyalty to him. this would effectively be the end of the elves and they know it.

No one knows where Mangor has taken the peacock.  The player characters, Thorn the thief and Drake the warrior, have been asked to find him and recover it. First, they travel to the ruins of Moon Keep to meet with the spy Mortimer (an elf who uses magic to disguise himself as a gnoll) who has some leads.

The Setting: Sensool, Province of the Forgotten Empire: 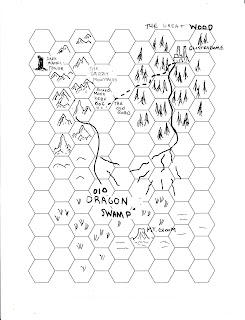 Each clear Hex is about a day's walk from side to side.

As soon as they set out from Glistendome upon the back of their elephant, Tusky, the characters are attacked by a small band of goblins led by a gnoll.  The fight is short and savage.  The gnoll is killed and the goblins flee in fear.

Upon arriving at Moon Keep, the adventurers find that their contact is not in evidence.  Drake (who has an 18 STR!) kills a giant spider while they wait, but even after a full night, Mortimer never arrives.  While the PCs are arguing about what to do next, they are approached by a satyr who identifies himself as Mister Thistle.
Mister Thistle informs Thorn and Drake that a creature known as the Troll-witch has taken their friend into the catacombs beneath the ruins. He believes that she plans to eat him. Thistle offers to show them the entrance if they will be so kind as to retrieve for him a vial of green fluid that resides somewhere in the catacombs. They agree and Mister Thistle hooks them up... 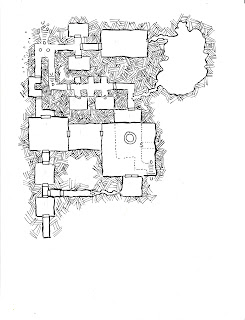 Some character sheets (stolen from here) 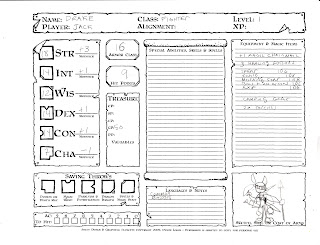 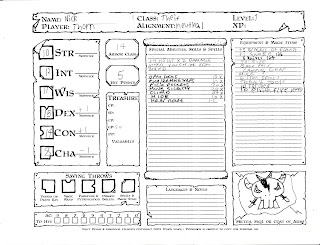 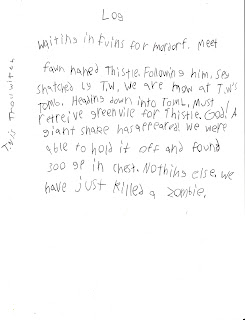 All this brings me to my plans for this site. From here on in I'm only going to post when I have something substantial to share. My current plan is to post once a month. Undoubtedly,  I will use this format to complete some of the many unfinished projects that are drifting around here, but primarily I'm going to post stuff from my in progress games. I will make my next post on or around May 1st. I'm not certain what I'm going to put up, but it will be something with a bit of meat or I wont post at all.