Before you can die on Madling Island, you must get there alive...

Part one is here. 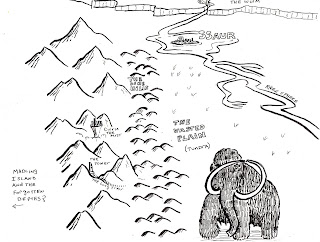 Note 1- click on the pic for a larger image,


Note -2 links to Ssaur, The Forgotten Depths, and The Tower of the Changer can be found on the left, I did not link them again in the post.

Getting there and reasons to go:

In my one on one face-to-face Metal Earth play test we’re about a session or two away from Madling Island right now. I wont force the issue, of course, but Scott (my player) has already taken his Shae sorcerer and henchmen (Two Minotaur adventurers and a Grey) through the Tower of the Changer and down into the Forgetten Depth (and found the teleportation pool back to Ssaur located in Hex 0703 of the Depths). He’s in the city right now, but I’m pretty sure his lust for magical treasure will goad him to the island as soon as he hears a rumor of it- which will be at the beginning of the next session.

As for how he got to the Tower of the Changer in the first place, at the beginning of our first session, I simply handed him a cruder version of the map above (hard to believe such a thing could exist, but it does) and said, “You left Ssaur several days ago, searching for a pathway in to a fabled hidden land that is supposedly rich in magical treasure; you’ve been dodging a band of Mammoth Men for three days and you’re just about out of food, You see a tower high up on the side of a mountain to the west.”

This above is pretty good example of my preferred method with which to start a campaign; it saves me from an evening of, “So you are all in a tavern,” which I find extremely painful. Furthermore, once the initial session (or two) is over (we played the Tower and the beginning of the forgotten depths in roughly 5 hours total play time) the players are likely to have a pretty good feel for the basics of the setting and some sort of idea of what to do next.

However, I am aware that not everyone likes to do things this way. And, although, I am doubtful anyone is actually going to use any of this material ‘as is’ I feel compelled to offer some alternatives to my rather draconian and ham-fisted starting procedure.


I’m sure I could come with some more, but I’m sure that everyone reading this can as well.

Features of the Map:

The map features an area of indeterminate scale located to the southwest of the great city of Ssaur. The level of accuracy and the scale of the map are matters best decided by the individual referee. If one looks at the larger setting map, the scale and accuracy of which are also unknown at this time, one will see there is plenty of room to move on both of these issues. As a point of information, in my own game, I have decided not to decide- and I feel really, really fucking good about it.

Ssaur: soon to be remapped and updated, but the current version, available on the left, is close enough for now.

The Tower: in my game this is the Tower of the Changer. You must do as you will, of course.

The Long Stair: a leagues long, monster infested, storm prone, stairway cut in to the living rock. It leads to the Tower.

The City in the Mist: in my game this is the ruin located in Hex 0301 of the Forgotten Depths, it’s also probably important to mention that the scale of this map is completely out of whack with reality in my game. Anyway, I am eventually going to detail this location, but if you wish to use it in the meantime you are on your own, which is kind of nifty, really.

The Dire Hills and The Wasted Plain: both of these regions are dominated by large herds of dangerous herbivores and blood thirsty hominids known as the Mammoth Men.

The River Sphere: a wide, frigid and fast flowing river. Plied by steamships, manaships and barges, but also plagued by mutant pirates.

Next time: Critters- including, but not limited to, Dire Mammoth and Mammoth Men (neither will be quite what you expect, I assure you) as well as the legendary one eyed monster mammoth and terror of the wasted plain: Squint. Also, some encounter and weather tables for the region southwest of Ssaur.