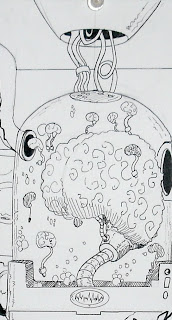 Note: the pic above is just so that nobody gets boobs on their blogroll by accident. See below for the source drawing in its entirety.

Special: Can only attack every other round

Drones are the work force of the Scorn people. They are slow witted, slow moving sexless creatures usually organized in groups of 10 led by a technician or a leader. Drones are immensly strong and can lift at least a ton unaided. Dependant on the type of work they do drones range in height from 3' to 12' tall; they have dull gray hides and usually wear no clothes, except for the occasional tool belt. Drones will enter combat if urged to do so by a Leader, Technician, or Imperial, but left to their own devices they will allow themselves to be slaughtered without fighting back.

Special: Natural Camouflage -2 to hit during the first round of combat

Scorn warriors are smarter and more savage versions of the Drones. They are organized into squads of 5 each led by a Sargent who is slightly more intelligent than the others. Scorn warriors are fearless and will fight to the last unless ordered not to do so by a Leader or a Technician. Scorn will usually shoot to kill, but situations sometimes arise which compel them tho take prisoners. In these cases, they will use the pain bolt. Warriors have no sex organs, and no sense of modesty- although, sometimes senior warriors will tie a bit of cloth around one arm, or apply war paint. Warriors have thick leathery skin and natural camouflage.

Unlike drones and warriors , Technicians have a biological sex and reproductive capability. Technicians keep the complex technology of the Scorn settlements functioning; they are also responsible for supervising drones, and occasionally, groups of warriors. Every technician is (effectively) a 2cnd level magic user. All are equipped with the power up spell and another first level spell of the referee's choice. Despite their name, Technicians are able and formidable combatants. Unlike drones and warriors, technicians have a sense of modesty and tend to wear clothing when outside of the domiciles. Standard attire is a silver shipsuit- a skin tight garment, which is actually a form of high tech armor. The armor works by activating a localized micro force field at the point of impact/contact of any weapon or blow. The reaction system is controlled by a highly efficient logic circuit woven into the fabric of the shipsuit which can effectively react at light speed. The listed armor class is valid against any sort of weapon including firearms and energy weapons.

Scorn leaders run the day to day affairs of Scorn society. Like Technicians, leaders are also sexed and capable of reproduction. Leaders use a slightly better version of the shipsuit, which is black and somewhat more loose fitting. Leaders have a complex inner hierarchy which informs their every interaction with one another and with the other castes. This hierarchy is sometimes (intentionally) subverted by the Imperials. Leaders are formidable combatants, without fear, but will not throw their lives away for a lost cause.

Imperials are the executives of each Scorn settlement. Although they defer to the Collective, imperials have absolute rule at the local level. At any given time there is one Female and one male Imperial for each settlement. However, Imperials are usually content to leave the day to day management of local affairs in the hands of Leaders and Technicians, preferring to fill their time with hedonistic pursuits. Imperials are hyper sexed, with exaggerated primary and secondary sexual traits. They rarely wear any clothing, and although they can reproduce, they are not, as is the case with Leaders and Technicians, compelled to do so. Imperials will occasionally go mad with lust for a member of the opposite sex- they especially prone to do this in regards to Humans who show a high degree of competence. A lust crazed imperial is liable to sacrifice anything in the pursuit of this desire.

Imperials are extremely potent on the battlefield (and in the bedroom) and will only withdraw if they are seriously over matched and losing- and even then they virtually never forgive or forget.

Here's the pic, and yeah I made some mistakes with perspective.
Edit: this looks a lot racier on my drawing board but I'll leave the NSFW tag up just in case. 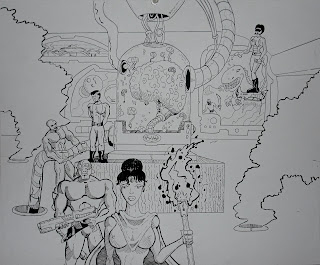 The Way of the Gun. Ranged weapons: Missiles, bullets and blasts part 1 0f 2

I've spent a lot of time thinking about this, and trying to figure out how to keep it simple. This is what I've come up with and more or less how we've been playing.

Note- this system is designed to work with the alternate hit point rules. One of the assumptions of those rules is that hit points represent fortitude, stamina, luck and skill- not physical integrity.

Therefore, a hit with a ranged weapon is an automatic roll on the proper wound table for medium sized and smaller creatures.


Against a Firearms and Energy Weapons everyone has a 9* [Ascending AC 10] armor class at close range. Long range results in a negative modifier of 2.

Rate of fire varies from weapon to weapon. Most firearms have a rate of fire of 2. Some energy weapons have higher or lower rates, depending on their nature. A hit with a firearm or a energy weapon results in a roll on the proper wound table (post forthcoming).

Negative:
-2,-4, 20, and no.
Any complication, such as a moving target, or partial cover or whatever results in -2 modifier an additional complication results in a further -2. If there are three complications, (e.g. the target is crouched down running behind a low wall in the fog) the target can only be hit with natural 20. Certain circumstances will result in a situation where the target can not be hit, such as full cover.

Positive:
Certain devices or special weapons may come with magical or technological enhancements (e.g. scopes or blessings) which grant them a bonus. This bonus varies from weapon to weapon. For reasons I will go explore in a later post their are no magically enhanced firearms on the Metal Earth.

The Scorn: Part I


The Scorn are humanoid aliens with several settlements on The metal Earth in the vicinity of the Burning Peaks. How long they have been on Earth is unknown as are their ultimate aims.
The Scorn are masters of Technology. They posses a full gamut of high tech items including a fleet of space worthy flying saucers.

Although they are apparently mammals the Scorn have distinct physical types associated with the types of work they do, not unlike insect castes. The Scorn come in four basic types or castes: Leader, Technician, Warrior and Drone. Of these types only the Leader and the Technician castes have sexual differentiation. Individuals of the Drone and Warrior castes are sexless brutes. Their is a fifth type of Scorn, the Imperial, of which only two adult individuals exist for each major settlement at one time.

Scorn children, known as waifs, and borne only by females of the Leader and Technical castes, effectively comprise another caste. Raised in creches by Drones, waifs nearly always grow into adult Drones, unless, however, some catastrophe has thinned the ranks of the upper casts; in which case, they will grow in such a way as to fill the gaps. In the normal course of things, birthrates are low, and Drones will actually change to fill any gaps in the Warrior class, Warriors will mutate to fill gaps in the Technician castes, and Technicians will transform into leaders. It is the task of the Imperials to decide which individuals are worthy for the transformation; these decisions are as a rule, based upon merit, but favoritism can play a role. If one of the Imperial pair dies, the surviving Imperial chooses their new mate. If both Imperials perish, their replacements are determined by a series of trials involving all members of the Leader caste.
However, death is not the end for members of the Imperial caste. If it is possible their brains are preserved in a huge tank with all those that have come before them. This tank acts as sort of living computer, known as The Collective. The collective rules over all the various Scorn settlements on a given world. It also what the Scorn consider the afterlife and the highest reward one can earn.
Posted by Aos at 2:28 PM 1 comment:

Email ThisBlogThis!Share to TwitterShare to FacebookShare to Pinterest
Tags: Advasaries, Critters, The Burning Peaks, The Metal Earth, The Scorn

I tried to do something here that would capture the feel of the setting and highlight the next round of posts about The Burning Peaks region. The fellow riding the boar borrowed most of his wardrobe from John Carter and Den of Earth, but he got the boots from Conan.
Posted by Aos at 12:43 PM 6 comments: