One of the primary reasons that people tend to stick close to the cities is the easy availability of edible foodstuffs. Consumables found in even (if not especially) the most fecund parts of the wilderness are often unsafe to eat (for an in

Agriculture is predominantly practiced underground in natural or fabricated subterranean complexes known as greenshafts, which are usually located within cities or in close proximity to the same. Because of the frequency of curse squalls in most areas, this is a necessary and beneficial practice. However, it is unknown which came first curse squalls or greenshafts.

To put things in perspective, outdoor agriculture is unknown in most places, and you might have trouble convincing people that anyone has ever engaged in it. At best it is viewed by civilized people as something that was left behind long ago.

Within the greenshaft, agricultural production is accomplished through a variety of technologies, the power for which is usually drawn from the earth itself in the form of geothermal heat.

Areas of the greenshaft hold corral pools for hron, a species of domesticated aquatic mammal. Hron are valued for their milk (and the cheese that is made from it) and meat. Furthermore, hron hide can be used to fashion both warm and water resistant clothing. Hron meat is mostly a luxury of the elites. Additional meat is grown in vats.

Tower of The Changer 1pg Dungeon 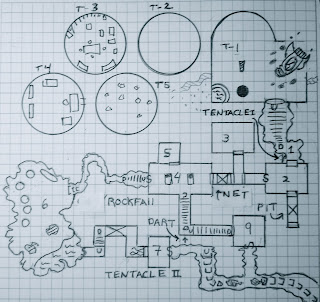 Okay, the idea here was to create a training ground to teach a group how to think about dungeon exploration without killing them outright. The levels I'm working on now will be considerably more lethal and should be done sometime around 2015 at the rate I'm going.


Edit: there were two small mistakes in the original version. I fixed them and re-uploaded. Sorry.