I'm working on a huge post right now. I've set a deadline of Tuesday for myself, and I have a shit ton done already, but we'll see, I suppose. Anyway in the meantime, cheap ass colored pencils! 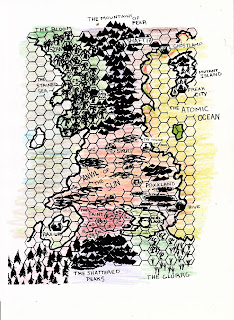 The Cracked Land: The landmass at the lake’s center is broken into thousands of pieces by fissures that run from the surface down deep into the bedrock. The island also seems to be undergoing a continuous bout of seismic activity, manifested as a steady earthquake and frequently erupting acid geysers. Areas of the island rise above and sink below the surface of the lake all the time without warning.

The Library:
Legend places a vast library known as the Hall of Humanity upon the Cracked Land. Although there are many myths, stories and works of art based upon the library, no reliable accounts of the place exist.  Currently, scholars argue that if the library ever did exist, it has long since been destroyed.


The Monastery of the Broken Oath:
Of the many ruins that lay strewn along the lakeshore, the remnants of what was once a large monastery, located on the southeast shore of the lake near where the Acid Lake cedes to the northern Glurrg, are among the most significant.  The monks who once resided there were unwise enough to renege upon a compact made with the vile space god, Karad Narg, the Eater of Hope. The entity laid a curse upon the monks condemning them and their offspring to forever live within the acid of the lake, forever burning, but never wholly consumed, thus were born the burning men.

The upper works of the monastery are still largely intact, due to the enchanted stone of which the place was constructed. It is said if one visits the ruins on a night with two full moons and performs the proper ritual, it is possible that contact with the Karad Narg and perhaps seek his favor.

First, I'd like to thank Dan Procter for putting LL together, because I haven't done that, and I should.
I'll put the sorcerer up tomorrow (it's done).
None of these are play tested, but they will be soon.
The final line up of classes will be as follows- The Adventurer, The Monk, The Necromancer, and the Endless (Human as a class- which is nothing more or less than a reskinned B/X elf).
I guess I could make a .pdf of all this stuff, but that might require some effort, and I think we all know how I feel about that.

Note there are a couple of new spells in here I need to write up, and I need to go back and fix the names so they tie back to one version of the game, but you'll get the idea I'm sure.

Necromancers wield magic they draw from the necrosphere, the ancient Earth’s spirit world, which is infused with the ghostly energy of eons of the dead.

In order to work their magic Necromancer must have a focus made from the remains of a dead creature. Such object may include a skull, or a staff made of bones, soft tissue foci are rare but not unknown; however, such foci must be shielded from decay by embalming, mummification or some other method.

Blood Magic:  Once a day, a Necromancer may inflict a minor wound upon himself in order to gain an additional spell of one level below the highest level spell they can cast. This maybe done a maximum of three days in a row.

Potions: Necromancers of 6th level and above may brew potions.

Satan's Spine: Anvil of the Sun

Map on the left.


Anvil of the Sun:
A vast expanse of broken, sun-blasted earth and black sand, the Anvil of the Sun girds the center of Satan’s Spine, creating a nearly impassable barrier between the northern and southern extremes of the landmass.  The desert is home to a host of strange and often hostile life forms, each caught up in the desperate, savage struggle to survive.
Food is scarce, and water even more so. In addition to the searing heat, frequent high-energy sandstorms, each of which is believed by the residents of the desert to be a separate manifestation of the one true eternal sandstorm, which they call the Groove, rip across the barren landscape; the sand laden wind of the Groove moves with such force that it can scour flesh from the bone, and turn the bone into dust all in the space of two or three heartbeats.

Nomadic gangs of scavengers, brigands and outcasts prowl the interior, searching for artifacts and valuable mineral deposits and warring amongst themselves.

History/Myth:
Known universally as The Squandering, the story of the Anvil’s formation is told several versions, the minor details of which vary from region to region; the most prevalent version of the tale states that at some indefinite period in the past, what is now the Anvil of the Sun was the last pure place in Satan’s Spine. Green fields stretched form horizon to horizon; all people lived in harmony and in peace with the beasts of the land. The water, the food and the air were all clean and mutation was unknown.  The gods, it is said, stored their most valuable treasures here in the last pure place- among them, the pool of eternity: a body of shimmering water, which, if bathed in, would grant any mortal eternal life.
Attracted by tales of the beauty of the Pureland and rumors of the Pool, the humans came; in their avarice and despite the best efforts of the gods and their faithful servants, the humans brought about the destruction of the Pureland. The gods endeavored to spirit away the Pool of Eternity, but were destroyed; somehow, the Pool was lost in the resultant confusion. Its ultimate fate and location remain unknown until this very day. In the end, the last whisper of purity in the world was ravaged the gods were killed, and the humans were, as is usually the case in such stories, responsible.

Although there is no concrete evidence to support or contradict the existence of the Pool of Eternity, it is obvious that at some time during the deep past two gigantic forces clashed across what is now the Anvil.  The ruins of many settlements are known to nestled beneath the black sand, thus proving that at one time what is now desert was perhaps something else. As to weather or not humans were responsible- or even involved, as they are completely absent throughout the Spine today, who can say?