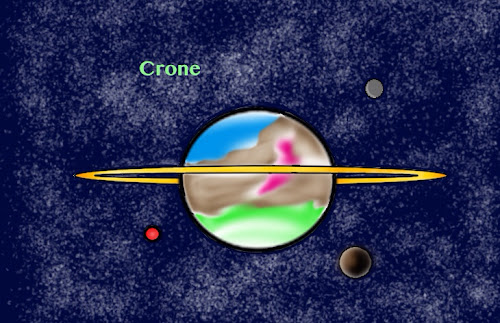 A large terrestrial (rocky) world, Crone is sheathed in an atmosphere of toxic gas comprised chiefly of ammonia and methane. Sky City, the chief population center is situated at 20k meters elevation, above the natural atmosphere, and built upon the peak of the planet's highest mountain. The city, which will be detailed in a future entry, is supplied a breathable (for humanoids) atmosphere by three floating weather control/gas processing plants. It is the only place on the planet where it is possible to go about without a survival suit and breathing apparatus.

Although the city acts as a trading center and houses the administrative offices of the three major companies that de facto own Crone, and houses the managerial elite, and even has sizable middle and under class populations, the vast majority of the planet's residents live upon the surface, in small company dome towns, isolated independent settlements, scout skimmers fitted for long term residence, or nomadic squats.

Of course, as with most worlds, the comfort of the few is secured by the labor and hardship of the many. The chief industries of the planet are two-fold. The mining and processing of rare earth elements and heavy metals first drew Bothco to the world; the discovery of the planet's strange indigenous life and its exploitable psychoactive properties brought in Simblex and The Tarn Corporation some fifty years later. The three megacorps exist in a state of continual cold war. In addition to the antagonism they face from one another, the corporations must also contend with several hostile factions amongst the general population as well, both in Sky City and upon the surface.