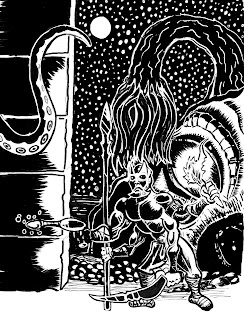 THE GRAX
Thark! horde, 10,000 strong, as of late, ruled over by Goom a huge and savage warrior of limited intelligence.

Places of Power: The Grax make their camp at the edges of Ruined Xumos.

The Shape of Things: The Horde stagnates and goes nowhere. A decade or more ago, the Grax defeated their traditional enemy the Huuurn, a horde to the north. They have been at loose ends ever since. Furthermore, continuous leadership struggles, and the resulting deaths,  have undermined the brain power of the Grax elite. Many warriors of renown have walked away from the horde in disgust. The struggles have mostly died down, now that Goom has taken control, but the damage has been done.

Pastoralists, foragers, and horticulturists, the Grax Horde takes sustenance from their herds and secret gardens in the deep city, unaware that they have reinvented food production.

Goals: Best described as the sleeping giant of Zerzura, the Grax Horde is aimless and without purpose or momentum.

Demeanor: Violent and Savage, the Horde takes what it wants and asks, nor expects, any mercy
Posted by Aos at 10:24 AM