We rejoin our heroes, mere minutes after the close of our previous episode- still trapped within the lair of doctor Stitch.
The cast:
Leopold the Terran- currently missing.
Quas Joktar, thark! of the Grax horde.
Cyno Drox, Menton.
Xeibrixia Nelvo Menton.

The hours grind past. The poor wretch on the table twitches and moans. Dr. Stitch and the Whip enter the room, stare at the prisoners and talk in giggling whispers between themselves.
As they depart, Nelvo uses his cloud-mind power to confuse Doctor Stitch. The doctor opens Nelvo’s cell door and departs.
Nelvo  exits his cell, grabs his gear from the pile in the corner and lets the others out.
Once everyone is geared up, they concoct a plan. Drox climbs up into the pipe-works and hangs a noose over the threshold. The others lie in wait.
Dr Stitch enters.
The noose closes around his windpipe- and yanks him upward!
A flurry of stabbing and psionc attacks follow.
Dr Stitch’s Skull flares and a wave of warp energy explodes outward,  but it is a feeble attempt and does no damage.
Doctor Stitch expires; his corpse begins to seep a stinking and viscous, boiling yellow ichor; gummy and hot it drips, smoking, onto the floor
The party exits the cell block and comes once more (see the session 2 AP) into the huge cavern full of vats. They see some creepy half formed monstrosities and vat-goons floating in the vats.
The party wanders in a vain attempt to find a way out and stumbles into the the vat-goon kennel. Oriented now, they flee towards Dr Stitch’s office, goons and their master hot on their heels.
They make their way over the floating bridge; past the giant sslarg; and into the office- which they quickly loot. The acquire a sun beam pistol and ray gun tubes.
After exiting by the only remaining door, the party runs down a long flight of eroded steps, and finds themselves in a magna rail station, like the one they visited under the rocket tower in session one- except in good repair.
Before them a train floats at the platform’s edge.
The noise of pursuit comes from behind.
Someone places a mystery triangle with a green center into an identically shaped depression alongside the train door. The door opens. The party piles in, stumbling over one another.
Vat-Men and stitchlings swarm the platform.
The door whisks closed and train shoots away from the station. 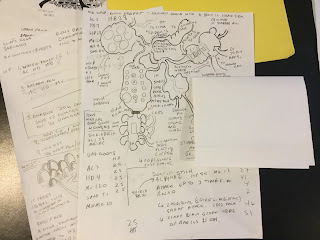