[Map] Beneath the Valley of the Dwarfs

A couple of years ago I read the AD&D 1e Dungeon Survival guide. The book contained some neat content regarding underground worlds, but I could not see how to draw any of it out of it and make it useable at the table, really. More recently, WoTC put out a very readable underearth book for 4e. It really got me thinking about this stuff again, but, like the 1e book, it didn't have any real game ready content.

i want to make something along those lines that could actually be used.

This is a conceptual map and is not meant to be completely representational. Think of it as like the maps medieval explorers made.

This is not a dungeon, but a small portion of an underworld. Many dungeons could be (and are) linked to it and contained within it, as well. Many regions might contain more than one dungeon.

Time and space work differently beneath the world's surface- and do not necessarily maintain internal consistency. On one trip, It might take an hour to cross dinosaur cave, and one never sees where the light is coming from; another time, it might take a year, and a dull red sun hangs unmoving and undeniable in the heavens.

Magical protection is required to move through the underworld and maintain a consistent temporal connection with the world above.

The rift in the northern tundra on this MAP is the source of the waterfall at the top of the underworld. There are other points of entry accessible from the surface, like the cave in the south east. Try not to think to hard about how it all lines up, but if you get hung up-

Miles of tunnels- miles. I don't have to explain shit.

Also, you could plug this map into just about any fantasy/ science fantasy style game/world, all you need is a flight of stairs leading down.

I will almost certainly fool with this map again.

Come for the Monster Garden, stay for the Circus. 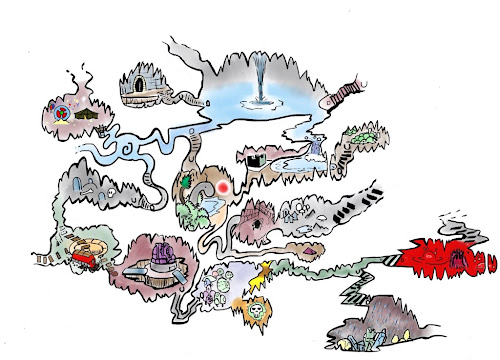