I have never drawn dwarfs before. The proportions fucked me up to the extent that I had to scrap like my first five tries, which were all just standing poses. I gave up on that shit and decided to try something with some action. I also decided that gnolls are cooler than orcs, and so they will be the chief adversary of the dwarfs in this setting. I'll post a larger, cleaned up and colored version later, anyway, I think that will be the cover of the pdf. 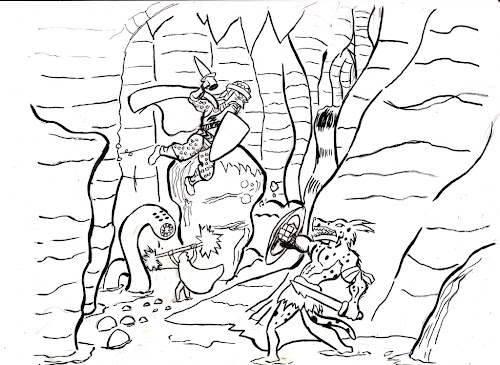 Here is the Vale of Sorrows, as it is called during the game era. A vestigial remnant of dwarfs holds the tower in the west, and fights a desperate never ending war with the gnolls and their Hex-king, who occupy Urux (the former center of Dwarf civilization) in the east. Most of this battle is played out in the forest on the valley floor. I love mini settings so this where the detail will go. I'll be creating a regional underworld too, which connects to the dungeons beneath Urux. This map, however, is currently deep in the WTF are you doing? Phase. 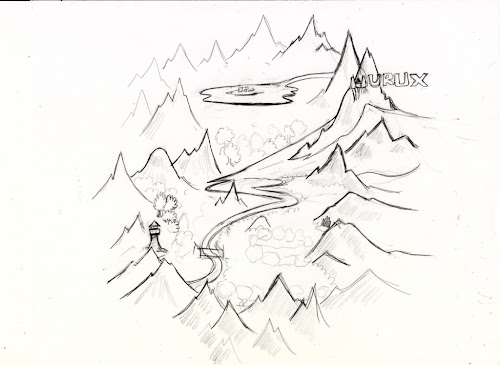 Here is color map, for the second part of the lead in adventure (two short dungeons, that lead into the mini campaign- which is the meat of the supplement. I'm going to cannabalize some old maps too, Murder Holes (look on the left) never got enough play for my tastes, so I'm going to reskin it as a level under Urux. 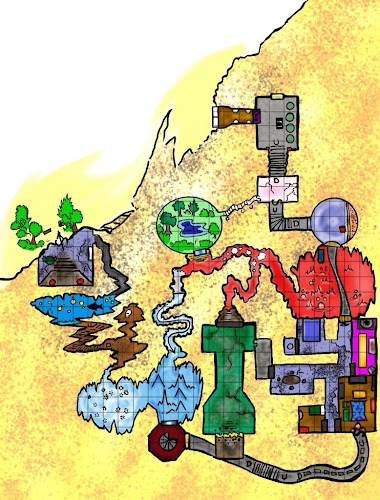 Anyway, that's all I got. Posted just in time for everyone's friday commute, just to be certain no one will look.