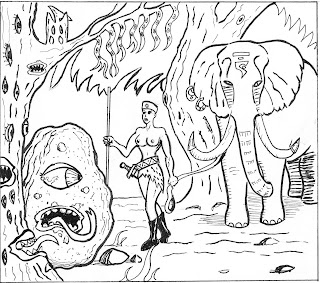 As I have stated elsewhere, clerics are rarer than humans on the Metal Earth (i.e. pretty fucking rare) . However, Sorcerers not only have all the MU spells, but access to some spells which are traditionally reserved for clerics as well. I have made small changes to most of the spells below and there are a couple of new spells too. The list below contains only first level spells; the rest will come soon.

Before I get to the spells, two items for those of you who visit regularly:

1. I’m a bit scattered lately, but a lot of the incomplete multi-part posts (like this one) will be worked out in the near future; I have no idea in what order, though.

2. I don’t really have another item, I just wanted to throw a list up because I thought it might make me look organized in front of the folks that showed up for the tattooed, earring sporting elephant (Which I think I stole the idea for from a dirty Pathfinder book I flipped through).

3. Wait, I do have something! Everything is under control. I got a scanner, the art I post will look a little bit better. Over the next week or so, I'm going to switch out some of what is already up for newly scanned versions.

Most of these are based on the OGL spells from S&W WB. A few are my own. I have altered all but the final three, but I left them up as a convenience for those who wish to make use of the list . They can copy it all from here. I declare all of my own spells open game content.

Caster throws a bolt of howling chaos energy. This bolt will cause a minor wound to any medium or smaller creature. A second bolt (cast during the next round only) will rob the target of 50% of their remaining hit points, and expand the Minor Wound into a Major Wound.

The caster detects creatures that have been altered or corrupted by radiation or magic within the spell’s range.

The caster can perceive in places, people, or things the presence of a magical spell or enchantment. Magical items or secretly placed charms may be discovered with this spell.

The caster can perceive dangerous levels of radiation within the spell’s range.

This spell affects living bipeds of human size or smaller, such as apes or sharkmen. If the spell succeeds (saving throw allowed), the unfortunate creature falls under the caster’s influence. In order to cast the spell the caster must possess a personal item belonging to the target, or use an obvious visible focus, such as a shiny coin.

1. As an illuminate spell the caster brings into being a floating globe of light about the size of a human skull and about as bright as a torch. The globe moves with the caster or remains stationary, at thei sorcerer’s discretion.

2. As a Shroud spell, the caster instead causes night-time darkness to fall upon the area with a radius of 20 feet, regardless of extant light sources. This field of darkenss can move with the caster or remain in one place, at the sorcerer’s discretion.

The caster has the ability to power up any technological device such as an autonm, computer, raygun, or a electronic door

Will protect caster from effects of harmful radiation, Arcane Bolts or curse squalls.

1. As a Purify Food and Drink spell. the caster causes enough food and water for up to a dozen people to be made pure, removing spoilage and poisons.

2. As a Putrefy Food and Drink spell. the caster causes enough food and water for up to a dozen people to be made putrid, creating spoilage and poisons.

This spell allows the caster to read directions, instructions, and similar notations that are written in unfamiliar or even unknown languages. It is especially useful for treasure maps.

Duration: 2 scrolls or other writings

This spell allows the caster to read magical writings on items and scrolls. Magical writing cannot be read without the use of this spell.

This spell puts enemies into an enchanted slumber (no saving throw is permitted). It can affect a number of creatures based on their hit dice.

Note: I wrote this piece of shit in Word before moving it over to blogger and the format is well and truly fucked; I can't seem to fix it, so please excuse the goofy spacing in some places.
Posted by Aos at 5:51 PM