Character Classes: Plan A and Plan B 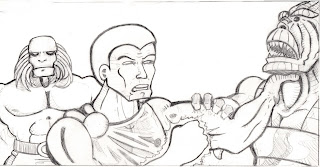 I’m still working this out, and I have two alternating plans.

Plan A: the players may chose from the classes listed below, each of these classes will have a number of options with witch a player may further customize the character in question. For example a sorcerer may be a healer or necromancer, or a bit of both depending upon his choices. A slayer may be a soldier, an assassin or a brawler. Another level of customization may be available through mulit-classing. Each character would only be allowed to advance in one class at any given time, but may chose to take a level in a different class upon leveling up in their current class. For example, upon gaining second level in the Slayer class, Sarken the Scourge decides to take a level in the Hunter class. This would be subject to GM approval.

These are the classes under plan A

Outlander: A warrior from another time or place. Examples from literature: Den, John Carter, Kamandi, Sumner Kragen (Radix) and many, many more.

Hunter : Scouts, savages and beast-friends these seasoned individuals have the know how necessary to thrive in the wild. Examples from literature: Naüsica, Hiero, the gelfling chick from Dark Crystal.

Sorcerer: Wielders of the realty warping power of magic. Examples: Turjan of Mur and Mazirian the Magician (The Dying Earth).

There are two classes Sorcerer and Adventurer, any and all special abilities have to be worked out with the referee. I may provide a list of suggestions, like “Speak with lizards” and “crack shot” and shit. I don’t know. Maybe there will be a random table of special abilities.

Regardless of which way I go (as of this writing, I’m leaning heavily towards Plan B) there will be two ‘race’ as class options (Robot and Halfdead); mutations (mostly psionic in nature) and Sorcerers will be able to use any sort of weapon- except guns (the mechanisms of firearms and energy weapons mess sorcery up).

Actually, I may have made a decision while writing this post, but I have to think on it.