Haunted Islands three approaches to race and some arts

As envisioned the islands were intended to be an isolated humans only monoculture, but I don’t like restrictions that inhibit fun.

I racked my brains on how to go about this, but I think I’ve come to a satisfying solution


Race and Class
Three Approaches
1. The citizens of New Urveon are one and all, human and native to the islands. Classes available are listed below. This is what we used when we playtested.

2. Foreigners from every part of the Dreamlands pass through the port of Stoker and, as such, the individual GM must decide which races and classes to allow.
Note: Although considered equal in the eyes of the law in regards to unpaid debt and other crime foreigners are not allowed to hold office, serve in the military, conduct business beyond trade or own property. They may move freely about the countryside, but should expect to be under the watchful eye of the authorities at all times.

3. The islands are still a monoculture but exist at the edge of the Dreamlands. Everyone can play whatever race or class they want with no further explanation. I call this the Muppet option. It’s my current favorite. 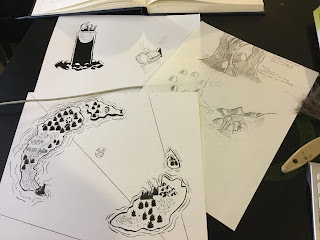