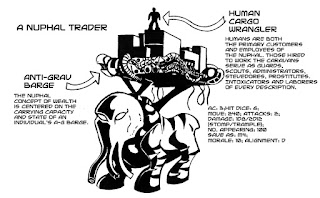 The book is still in DRTPG’s process.
I will offer the following
Adult content version- premium HC (is says color, but it will be black and white) Standard soft cover.
Rated T version: regular soft cover
And pdfs
I can’t say when, but soon.

The rated t-version will have altered and substituted art work.
There are no sexual situations in either version.
The adult version has quite a bit of full frontal nudity.
I have no regrets.

THE HERD
The Nuphal, large sentient pachyderms, operating as a collective of clans, control overland trade throughout Zurzura and beyond.

Place of Power The marketplace.

The Shape of Things If it is a staple of life and cannot be produced within Xards or one of the other settlements it comes to the Dry Sea via nuphal caravan. Famed for delivering goods intact and in a timely manner, the nuphal clan caravans boast an excellent reputation.
The Herd represents a key link in the highly illegal flesh trade. In fact, the Invisible Hand considers the nuphal caravans the only sensible way to transport slaves. Each clan runs a caravan. Currently, ten clans, each linked to the others through a weak form of ritualized telepathy, walk the sands of Mars. Each caravan follows the same unmarked route, known as the Golden Road at unevenly spaced intervals; a new caravan arrives in Xards without warning a month or two after the departure of the last. But occasionally a year or more will pass between visits.Individual nuphal act as caravan organizers, porters and guards.
Additionally, the clans employ humanoid agents to further their ends within settlements and mercenaries to guard their expeditions. Despite the Herd’s use of sell swords, nuphal warriors know few rivals in their capacity for destruction, and, although rare, there are powerful Warp adepts among the ranks of the clans.

Demeanor Herd markets and caravans entice with goods and revelry, and for most provide nothing but a good time. But some who drink and dance amongst the nuphal vanish into their midst, never to be seen again.