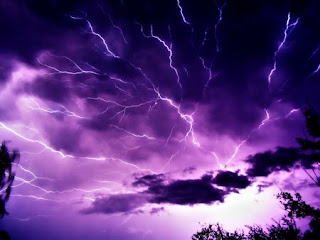 Climate varies a good across the breadth of the Metal Earth, but for millennia prior to the Wars of Unreason (The semi-mythical Age of Gold), there was a worldwide network of weather control stations. Powered by a combination of atomic and arcane energy, this station worked to homogenize climate conditions across the face of the entire world. The system was broken during the war, but normal patterns did not reassert themselves. Quite the opposite in fact- weather went wild- breaking and reshaping the world all at once. Efforts were made by sorcerers and scientists stop this from happening- but if they had any impact it was only to make things worse. Eventually, an ice age commenced- that has never really ended. It also but violent storms are common, which brought with it a modicum of climatic stability. This ice age has never really ended since that time, although there have been some slightly warmer periods. The time of the shattering is long over but extreme weather is more the norm than the exception. You are far more likely to get a blizzard than a light snowfall or a torrential downpour than a light rain, although mild weather is not completely uncommon in some microclimatic areas.

Beyond the extremity of most storms, the breaking of the weather control network and the resultant release of ungoverned arcane and atomic energies into the world’s climate system had other ongoing effects as well: Curse Squalls and Timestorms.

Timestorms:
Timestorms are not common, but they do occur with some frequency. Fortunately, most of them occur over water and are relatively if not always, harmless. Timestorms are usually preceded by the formation of dark cloud funnels, which are crisscrossed with purple cloud-to-cloud lightning, as the storm grows in intensity so to do the electrical activity. It is at the peak of the electrical activity that the storm really gets underway. Time vortex open up- sometimes one, sometimes one hundred or more, depending on the intensity of the storm. There are two kinds of Timestorms, takers and givers.
Takers: During a taker storm, things are sucked into the time vortexes and moved to a distant temporal location, past or future- it can go either way.
Givers: during a giver storm, things emerge from the time holes. What kinds of things? Just about fucking anything really, from dinosaurs to toasters to people.
Note: it is entirely possible to whisk a party of adventurers off into time during a taker storm; it is also possible to bring in a new PC (say a 20th century human into the Metal Earth with a giver storm.)


Curse Squalls:
Curse squalls (or storms), are far more common than Timestorms, and usually more dangerous. Curse storms look like normal rainstorms (albeit of an extremely violent nature, even for the Metal Earth) except the raindrops have faint green luminescence.
Anywhere curse rain falls horrible shit happens. Sometimes the dead rise from their graves (corpse burning is a near world wide custom due to this). Other times simple field crops mutate into horrible carnivorous plants. Good men caught out in the curse rain sometime turn completely evil. Other times the rain is like acid burning and destroying all it touches. Nobody can say what will happen for certain when the Curse Rain falls, but whatever it is it wont be good. Sometimes these effects last only until the rain dries, or until sunrise of the next day- other times they last forever.
The magical element Arcanum can help protect crops and many other things from the curse rain. Farmers often sprinkle small amounts onto their crops as they plant them, and it is also an integral ingredient in the brick making and construction in general. Arcanum is naturally occurring in many rock formations and can be mined. It isn’t debilitating expensive, but it isn’t cheap either, though. Because of this, despite the dangers sometimes corners are cut- with predictably disastrous results, such as buildings turning into huge carnivorous stone monsters.
Posted by Aos at 4:32 AM