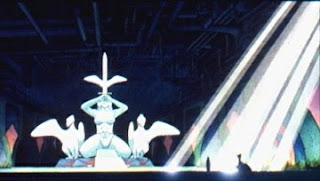 Religion is fairly rare in most parts of the Metal Earth.
Why is this?
There are two things to keep in mind the age of the culture in question, and the means of food production.
Big organized religion comes in with agriculture- or possibly just sedentisim (In the upper paleolithic there were several areas of the world that were productive enough to support large sedentary population without the agriculture; for what is worth, these were mostly ecotones). In our world, and in many fantasy settings, agriculture has been around for a comparatively short period of time.

In the Metal Earth agriculture has been around a very long time (millions of years maybe) and, therefore, so has religion. However, in the Age of Lead (and for eons previous to it) agriculture takes place mostly underground and is controlled more by technology than by the rhythm of nature; this is pretty important, because it removes two important tools of control from the priestly arsenal- the knowledge necessary to facilitate agriculture is no longer tied to a calender and the sun, a big focal point worthy of worship, has also been removed from the equation.

Obviously, the importance and dominance of religion varies from culture to culture- and over time. Large disasters can really shake the foundations of religious (and secular) power. It's thought that this sort of power loss occurred during the Mayan "collapse"- and it certainly did occur after the black death in Europe. The Metal Earth is pretty much in perpetual state of disaster. Secular power is on the run, and religion has pretty much moved on without leaving a forwarding address.

Furthermore, and perhaps most importantly, humans are nearly extinct, and are thought to be (through science, sorcery or evolution) the progenerators of all the other races. This undermines any belief in an all powerful/supernatural creator for most groups. The supernatural does exist, and is accepted as real, but it is hardly ever beneficial. Therefore, in most regions and cultures, faith has largely been replaced by a cynical sort of fatalism.

Which brings us to the topic of clerics. despite their rarity on the landscape, players should feel free to play clerics; Taarna from Heavy Metal is perhaps the archetype of a Metal Earth cleric- an ass kicking servant of a forgotten god.
Posted by Aos at 6:30 AM

Email ThisBlogThis!Share to TwitterShare to FacebookShare to Pinterest
Tags: Elements