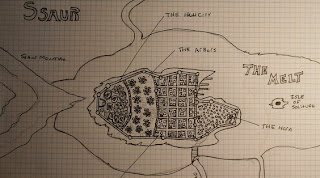 Ssaur is one of the oldest extant cities on Xurk (the north continent) It is, and has always been the main home of the Shae. the city is divided into four districts, and can only be entered from the outside from the eastern most district: the Horn. Movement between districts is highly regulated. Only Shae, Lizardmen, and Greys are allowed to venture outside of the Horn. Humans are not allowed into the city at all except for in very special circumstances. The island upon which the city is built is generally very hilly; altitude increases sharply as one moves to the west; Stairs are as common as streets in the two lower most districts. Streets and stairs are absent from The Arbors and the High city both- these districts are restricted to higher caste Shae and their servants (mostly lower caste Shae). A closed network of Teleportation disks is the main method of conveyance in these areas.

The Horn:
The lowermost area of the city is rundown and extremely overcrowded. It contains both entrances to the cities Agricultural caverns (referred to as the Greenshaft), and most of the residents are employed in food production. Hron (similar to manatee, but domesticated) are raised in pools located on the lowermost levels of the Greenshaft. Crime is rife here, and injustice is the norm. A huge Tyrannical Minotaur named Braxis manages the Greenshaft for his Shae masters, and subsequently rules the Horn itself.

The streets of the Horn are little more than muddy alleys winding between closely packed ramshackle buildings of wood, mudbrick and wattle.

The stink is so bad the locals have given it a name: The Waft. Characters who hole up in the horn for any length of time will carry the smell of it (one part bovine, one part rancid vegetable, three parts rotten fish, four parts unknown) for 3-8 days (1d6+2). Furthermore characters who have been there for over a week, will have to make perception (or equivalent) to even know that they smell that bad. Entering other districts of the city smelling of the waft is against the law and will lead to a Level One reprimand (see below). Entering the Haunted wood stinking of the Waft is the equivalent to offering a dinner invitation to every hungry predator within several leagues.


Market Town:
Market Town is where most of the city's business takes place. Higher class artisans and merchants (mostly low caste Shae) live here. The granite cobbled streets are patrolled by squads of Shae guards. Market Town is an exponentially more pleasant place than the Horn. Indoor plumbing is the norm and there are several (racially segregated) public baths. That said, it is far, far easier to get arrested in Market Town. The Circle (the city's ruling oligarchy) has a much firmer grip on Market Town than it does on the Horn, and their wishes are largely carried out by the guard commander and high judge (a Lizard Man) Korid Firescale. However there is a thriving black market in Hron meat (especially the bacon-like Glisglis), magic/tech items and green lingerie.

There is a working Teleportation pool in a disused temple. It leads to similar pool in Shards. Some trade is carried out between the two cities utilizing the pool, but the tariff is so high that many merchants prefer the risks of using one of the thrice yearly caravans to convey their goods.

The Arbors:
The Arbors is a lovely wooded residential area filled with circular clusters of Shae roundhouses. Magically Tame animals and monsters roam at will- and enforce the peace. Shae belonging to the highest seven castes (there are 24 total) live here. There are roughly thirty families livng in the Horn. The members of the so called "Overcaste" are selected from these families- this designation is usually based on Magical ability. Entering the Arbors without special permission will result in an instant Level three punishment (see below).

The High City:
Similar in many ways to the Arbors, The High City is the home of the Overcaste, or the Circle, the city's ruling elite. Members of this "non-caste" and their immediate families are considered to have transcended caste distinction. They display their unconcern for such things by eschewing the color green in their garments and domiciles and living in elaborate rectilinear houses, some of which even have scandalous and decadent features such as stairs and windows. Members of the Circle are Powerful sorcerers
.
A huge Ziggarut juts above all the other structures in the High City. It is rumored to be older than the city itself. No one, not even members of the Circle, ever talks about it.

The Law:
Sumptuary Laws:
Non Shae are prohibited from living in round structures, owning magic/tech items, anything green (or made from jade), using wheeled carts, congregating in groups of twelve or more and eating Hron (see below) meat. Religion is not completely outlawed, but it is generally frowned upon by most of the city's residents from high to low- as is common all over the ME.

Criminal Law
The Horn is ruled by the law of the jungle, but in the other sections of the city it is really easy to get arrested; guard captains are authorized to pronounce sentence on the spot, and the punishments are harsh to say the least. These punishments come in three varieties:

Level 1: (social impropriety censure). If you talk to loud, smell bad, commit an act of rudeness against a Shae (or sometimes a Lizard Man) or are found in Market Town when you shouldn't be there, you receive a level one punishment. This consists of 10 lashes, six months of penal servitude in the Greenshaft (usually involving the most dangerous work, and branding with a fool's mark (on the ass).

Level 2: (petty theft, murder of a non-Shae, unauthorized possession of contraband) Same as above, except it's a year in the Greenshaft, the brand goes on the transgressor's forehead, and the criminal is expelled into the wilderness at the close of the sentence, forbidden to return to Ssaur.

Level 3: (Grand theft, public drunkeness, murder or assault of a Shae or any of their agents, wearing green in public) Simply put they drop you down into the so called bottomless pit on the Isle of Solitude. No one has ever returned; therefore branding and flogging are considered redundant.
Posted by Aos at 3:38 PM