Alas as all good things must, my Star Wars game has ended. Sooner than I would have liked, but that’s how it goes.

However, in the last few weeks, as missed play sessions stacked up, I did a shit ton of prep, and I created a system for infiltrating a functioning imperial facility.
We’re not looking to map or explore methodically. It’s Star Wars you run around fro awhile, take some lifts, talk to your droid and find the Falcon.
Your player need a Droid for this kind of thing. It’s like a space smart phone and gen x hacker kid rolled into one. Also I am convinced that R2 D2 is a minor god of mischief.
If you give them a droid it should be the one with a bad motivator from IV, R5 D4, because that’s how SW works.

Here we go. This station below is a product of budget cuts in the wake of the demise of the original Death Star. It is a mash of Imperial and Separatists (The enemy of the republic during the Clone Wars) technologies. It lies at the center of a great ship’s graveyard hidden in a cloud of interstellar dust and infested with giant catfish like space monsters. 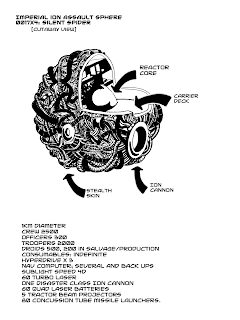 Now that we have our simple cutaway, or schematic if you want to do something a little more in depth- although I don’t advise it. .
Next I created two decks of cards. 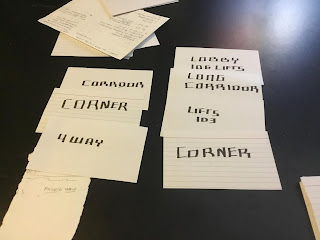 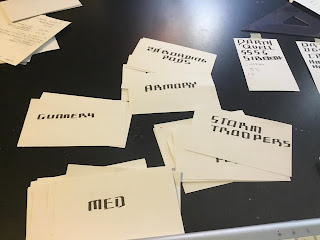 One deck is for architectural features and gets reshuffled every time you draw from it.  The other deck is encounters and locations.  I have as yet to come up with a scheme for how frequently to draw cards. But i’m thinking really frequently

Once a card from the second deck is drawn , the list of encounters is consulted. Eh after this, the card is  replaced in the deck or discarded. If it’s location/encounter that is singular, discard; if it’s Storm Troopers, put it back in the deck. You should have multiple ST cards in the deck, btw.  Here are the card  listings.

Ship invasion rules
Two card decks
Architecture. Some basic architectural features
Encounters and rooms (often with encounters too)
Some listings get more cards because they are more likely to occur. Some encounters are one time things and can be removed from the deck once they occur.

Start
Floating in space the characters do not have enough mass to pass through the air barrier and bounce back into space. The only way in is through an EVA access door. Two techs are near the door fixing something or other;  door is sealed. And requires a key code. There are two doors one has tech s the other does not.

Once inside the characters are confronted by a lift.
The lift comes out in the  scrap yard.

Assume that two troopers stand guard over anything even minimally important.

Access Tube I
Drunk technician. Apologetic. Thinks the PC’s are officers on an inspections. Belligerent.
Tube is just for climate control system maintenance. Shaped like a cheeto, shorth ladder leads to anotehr access tune with a long adder. Mostly conduity and pipes ends with a right angle crwl space, opens on Wampa Pens.

Access tube 2
Unoccupied leads to core shaft. Mostly conduits and utility boxes. A few computer stations  here and there, but all engaged in local functions.

Armory [restricted. Difficulty 15]
Storm trooper weapons and armor. 10 dormant battle droids. 10 thermal detonators. 2 troopers inside playing cards on thermal detonator box. If the alert has been given they will be outside the door, and demad that anyone approaching identify themselves.
Remove from deck.

Barracks
Off duty men having a raucous party. They give no fucks about the alert! If the PCs are dressed as Storm Troopers they will invite them inside. And hand them drinks. Some are in armor others are wearing pod racing paraphernalia.   Some drunk dude will stat shit with them, and demand to know who they are. He’ll accept any answer. Or forget he asked the question. Oh have a laugh.
If the PCs leave someone will try to get them to stay- the big race game is about to start.
“Get back in here, it’s started”
“Now that’s what I all pod racing!

Battle Droids
Patrol of 10 marching down the hall.

20 Boarding Pods
Long, narrow tech- crowded and ring shaped passage. Crammed with 20 boarding pod docks. A3 M4, Grumpy belligerent astromech doing repairs.  Wearing a restraingin belt. Will ignore characters unless they get in his way. Will attempt follow them out of the room but is blocked by the restraining bolt. If they take it off he will follow and commence to assist them.

Bio-Weapons [Restricted]
The domain of Doctor Ogmus Kryne.
Door open on a lobby like space. Reception droid (protocol droid; two ultimate Battle Droids.  lobby like space.
Two lifts one up, one down.
The upper lift leads to the wampa, rancor pens.

Down lift leads to:
White, creepy sterile lab. Drains cut into floor, slightly stained with blue. Lined with tanks and transparent plastic jars full of murky fluids and familiar unsettling shapes and masses. One of the jars has a rancor head in it.
Glass door leada out to a room lined with compurers and hooked into jars of fluid and huge bacta tanks. Quit droids scuttle over the machines like spider.

The doctor is in, before anyone can properly identify the occupants of the tanks, he steps out from the shadows. The warbest follows behind.
It is a rancor with a machine-like attachment to it skull.
The doctor laughs and welcomes them to his lab. He is mildly curious before the alert, but will attack on site after the alert.
He’s hella creepy.

Carrier Deck One
Main deck. Lots of techs and roughly 40 troopers on guard. Another 100 are marching around the bay in formation.work crews are everywhere fixing things and putting other things back together.
A dozen imperial shuttles; 50 tie fighters. The Distant Hope in the process of being dismantled and searched. The dead body of the original pilot is on a repulser lift stretcher in front of the ship. Several men in sickly green lab coats and filters masks built into their faces.
Storm troopers mill around the outside of the ship.
High chance of discovery.

Carrier Deck Two
Mezzanine above the landing bay. Twenty meters up; runs all the way around the landing bay, except the space side. Multiple lifts and stairs. At least two control rooms.
Lots of troopers and techs. Officers too.
High chance of discovery.

Discovery
Someone recognizes that their armor is damaged

An officer asks for papers.

Med Bay
Several Too one b med droids. State of the med bay depends on what has been going down.

Meat farm
Rows and rows of meat vats. Droids tending the vats pay no mind to the pcs.

Security Kiosk
Octagonal kiosks in the  center of a 4 way intersection/lift bank.  It’s presence indicates on or the other.
.