Every week or as often as I can manage it, I’m going to blog about Steve Austin, the Six Million Dollar Man (SMDM). I’m going to take a look at the stories; some of the actors that show up; discuss the social relevance of the show- and some of the surprising differences between TV then and now.
The most important and shocking is that the show is not dumbed down even a little. Yeah that’s right, a 70’s show aimed at ten year olds asks more from you than GOT or even the Expanse. Way more.

However, in contrast to Doctor Who and most other science fiction franchises; SMDM skews more towards science fiction than it does science fantasy. Star Trek and Dr who level technobabble are in surprisingly short supply- really they’re absent altogether.

What you can expect: Discussions of things like planetary conditions on Venus; cogent explanations of plate tectonics; speculation on robotics and space flight-  and not to mention the protagonist himself: Steve is a science fictional artifact, a fantasy projection of what prosthetics might someday be able to do- and in many cases, today, can. The original pilot was made in conjunction with a UC prosthetic research institute.

The first season of the show is comprised of three television movies; each of the movies is self-contained, but also plays into a combined story. The second two movies are more espionage oriented and the third is the best of the three. The first pilot is a slow burn- I had expectations of action when I went in and was disappointed. I watched it again (i don’t know ) why, and I really enjoyed it.
I found it absolutely impossible to dislike Steve. i want him to come over for dinner and bong hits.

I’ll talk about the first of these movies next week.


We have the technology, if you’d like to watch along. The entire series is available to stream for free  NBC dot com or, alternately, the DVD’s are really cheap. 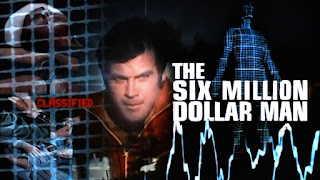