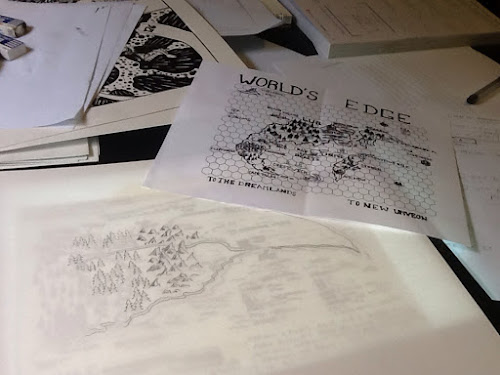 Above: the ghost takes on new flesh!

(It was my intent to post the complete map, but I lost a day due to stuff...)

This blog is haunted by the ghost of unfinished projects past and future. The time has come to finish some stuff.

Haunted Island, however, is 100% written and playtested. Sadly, it has art and maps that date back to 2014 all of which must be redone. Last year I tried to get it together for holloween, but Mars and Cosmic Tales intruded on it -and one another, as well. This year, I am going to try again, and if I'm not done not by Holloween perhaps we'll come ashore on Madman's Beach and have an ill advised look at the Asylum at Gorngard not too long after.

An excerpt regarding the Asylum's most famous resident:

Five years ago, wealthy, well regarded and eager to earn a knighthood, Captain Lazlo Bismarck embarked on an expedition, aboard the Starlight, to the Polar Regions to the far south- the supposed location of the lost city of Mu. Eighteen months later, a merchant cog found Starlight adrift several days south of Hefód. Bismarck, the sole survivor of the expedition, returned to Stoker in disgrace. Worse yet, a savage madness seized him in the days that followed, and he embarked on a rampage of lethal violence. The spree came to an end when he was subdued and apprehended in a slum tenement of Stoker, the bodies of his final victims strewn limp around him.

In the trial that followed, unexpected facts came to light. The crew of Starlight had indeed found the ruins of Mu, where they endured a strange and violent adventure, culminating with the discovery, at the center of the ruins, of a cluster of giant statuary of an unwholesome and extraterrestrial design. The sight of the statues drove most of the crew mad, filling their brains with unbearable silent noise, overwhelming their nervous systems with an alien tone. Violence ensued, and only Bismarck and two others escaped the island with their lives. In time, though, the alien tone overcame even them and homicidal madness took hold. In the end, Bismarck, last of all to succumb, found himself delivered unto civilization alone and a prisoner within his own skull, forced to watch as the alien tone drove his physical self to acts of violent cruelty and evil.

Once these shocking facts became established, the judge called for an extended recess and summoned experts in possession and demonology. Through the effort of the legendary Witch-Finder, Sirus Moth, the alien tone was exorcised and Bismarck’s volition restored...

NEXT WEDNESDAY- Some Maps and perhaps critter.

TOMORROW- I Return to the Ruinlands, the first setting I ever worked on here!