What follows is a review of the .pdf version of Rafael Chandler's monster supplement, The Teratic Tome. I received a complementary review copy of this book from the author, after expressing enthusiasm for the free online sample. Briefly, my opinion of the product remains overwhelmingly positive; if you are looking for a book of offbeat creatures with an horrific element, you would do well to pick up a copy. What follows is a more detailed examination of the book and its contents.

That the book uses OSRIC is clearly stated on the title page, if not the cover of the .pdf, but as with most products so designed, use with similar systems requires little or no effort on the part of the referee. Disregarding the title page and other miscellany , the meat of the text encompasses one hundred and six pages, and contains complete descriptions, and statistical blocks for one hundred and twenty one monsters. An alphabetical breakdown precedes the main monster listing, as does a treasure table and an explantion of the TAZ (THACO) entry found in each of the monster starblocks to follow.

Layout of the book is reminiscent of of various 1e monster books. I found it clean and readable. Overall, the .pdf looks excellent on my tablet.

The individual monster listings each contain a 1e style statblock, a full write up and an illustration. The stat blocks are the standard 1e affair, with the addition of TAZ.

Written descriptions range in length from a few paragraphs to a page or so at most; the majority fall in the middle range, consisting of several paragraphs of single colunm text. The quality is uniformly excellent. Most of the descriptions contain ecology notes and adventure seeds. Often, the two are one and the same.

The illustrations range from good to excellent. The artwork, however, contains a fair amount of body horror, and female nudity. There may even be a penis hiding in there somewhere, I'm not certain, and I couldn't be bothered to go back and look. Anyway, If such things make you uncomfortable, this is likely not the book for you.

The Teratic Tome contains many unique and original creatures, but it also includes varients of traditional creatures, e,g., dragons, devils, demons, owlbears and slimes. Several of the new monsters, such as the audience, have variants as well. Thirty three of the creatures are unique entities. Taken as a whole, the assortment is decidedly weighted towards higher level creatures. Seventy of the one hundred and twenty one monsters presented are level six and above, and thirty three are at tenth level, alone.


Although there are a some 'stand up and fight style' creatures in the book, such as the locust myrmidon, most of the monsters represented are provided with motivations and/ or interesting combat/hunting strategies. Many of the beast prey upon the transgressive or upon their victims. The demimondaine, for example, possess the body of a female murder victim, turns the corpse into an undead killing machine and proceeds to hunt down and slay anyone who ever wronged the woman in life. Another creature, the Infiltrator, impersonates the leaders of powerful criminal organizations, such as a thieves' guild, and sets about sewing strife within the ranks of the organization, its ultimate objective: to destroy the guild in as chaotic and violent manner as possible. Other monsters prey on the week, lustful, greedy, wealthy, innocent and guilty alike. Many if these creatures, such as the above mentioned Infiltrator could easily provide the basic impetus for a long series of adventures, if not an entire campaign.

Taken as whole the monster descriptions present an interesting implied setting. This setting has historical elements, details of an ongoing war in the land of the dead, possibility of alien invasion and even a hint of diakaiju. Other interesting details abound, any of which could easily be adopted or discarded by the referee. Overall the world presented looks rather horrific, which I found to be a point in its favor. However, as stated above, such details are easily passed over or adapted by the referee.

I could not hope to fully encompass the contents of the Teratic Tome in any review of reasonable length. Suffice to say that it comes with my highest possible recommendation. If further detail is desired, there is a free sample containing several complete monster listings on Rpg.now.
Thanks for reading. 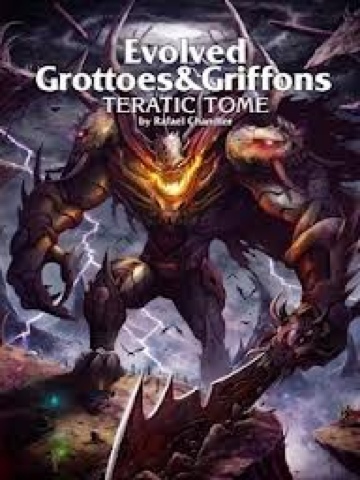 Email ThisBlogThis!Share to TwitterShare to FacebookShare to Pinterest
Tags: Reveiws