I'm still working out how I want combat to roll between adepts, but here is the rest of it.


At character generation, a d12 is rolled for each character:


A result of 12 indicates that the character is psionically invisible and can never gain psionic powers. The character is completely immune to all psionic effects, for better or worse. Forever. Note: although, the character is immune to direct psionic activity, he is still vulnerable to secondary effects; for example, a telekinetic may drop an object on such a character, but would unable to lift the character directly.

Characters without psionics, roll the d12 once more after the first time they are psionically attacked in play. A result of 1 indicates the character has developed dormant psionic abilities, and will be subject to the process detailed above. From the second time they are attacked on, these characters continue to roll the d12 once per incident; a result of 1 indicates the character has gained dormant psionic ability, and will roll as instructed above. The result of 12 however, signifies nothing.

Gravity is adept jargon for an individual's psionic power. In game terms this quality is represented by a derived attribute of the same name. A character's Gravity score is equal to the average of the six main attributes + 1/2 lvl. This number is Gravity's maximum value, as with hit points it is subject to loss and recovery and may rise and fall throughout the course of an adventure.

All psionic activity takes a toll on the adept, as represented by a related reduction to the adept's current gravity pool.

Adepts recover gravity at a rate of 1 point per hour of sleep, unless their points have been reduced to zero or below. For each point below zero her gravity pool falls, the adept will spend a week in a coma. If the gravity pool falls below -2 the adept must make a save vs death. Failure indicates the adept's brain and central nervous system have shut down. Death will result in 1d4 rounds.

An adept whose Gravity pool is reduced exactly to zero will be only recover Gravity at half the normal rate, and suffer a cap to his gravity pool at half its normal maximum value, further, the adept will be unable to engage in active or invasive psionic activity. These restrictions are in effect for 1d4 days after which, normal conditions, in regards to both recovery and power access, reassert themselves.

Passive psionic activity includes actions such as maintaining a psionic shield or staying alert to the psionic environment around you.

Aggressive psionic activity includes such things as taking psychometry reading on an object and initiating a violent attack.

Doing Things:
The success of psionic activity, including that related to combat, is adjudicated in a simple fashion. The active party commits a number of points from their gravity pool. This number is subtracted from the pool's total and added to the results of a d6. The total of the latter operation is compared to a target number (TN). If the TN is lower, the attempt is adjudged a success. The particulars of both TN calculation and the effect of success vary from case to case, and are covered in the individual power entries.

Each character automatically receives the shield and hear abilities and 1 additional power. Once per level the character my opt to spend lvl x 1000 xp to gain one additional power. This price represents time lost from character class related learning and spent in psionic meditation and introspection.


Shield:
Cost: 1 gravity point for 2 hours or 5 points and one hour meditation, for 24 hours.
This is a mind shield that protects against attack and survailence. This ability grants the adept a +4 to mental defense die rolls. This modifier may be split with other characters at the discretion of the player, although any such assignations much commence at the beginning of the psionic combat round.

How it works: whenever either conventional psionic activity or communication are initiated within the adept's radius of perception, the referee rolls a d6 and subtracts the value of gravity expended in the execution of said activity. The resultant figure is the TN. If this number is lower than 1/3 the total value of the adept's current Gravity pool, she is aware of the activity, its general nature, and the location of the active party within a kilometer or so. If the activity in question is a psionic conversation, the adept may initiate a conventional psionic attack agains the active party. Once the success or failure of the attack has been ascertained, the referee will roll one of the tables below on behalf of the active character to determine outcome.

Success 1d4
1. Receive general idea of conversation, but unable to ascertain specifics. 2. Rceive the entire conversation, complete with details, unable to identify participants 3. As with 2, additionally the adept can see the participants, and if known to her, identify them. If unknown the adept will recognize them on sight if encountered at a later time. 4 As with 3, additionally the adept will see the locations of each of the conversation's participants through their own eyes (this will be in addtion to the general location knowledge as stared above).

1. Confused snatches of conversation, possibly misleading (referee's descretion). 2-3. No effect. 4. Conversation received, but particpents gradually become aware that they are being spied upon. If they make a Successful counter attack, they will know the eavesdropper's location.

Note: psionic conversations typically take less than one second, regardless of how long they seem subjectively to the participents.


Contact
Cost: 1GP/hour
This power allows the user increased environmental awareness. Characters with this power will automatically detect sources of harmful radiation at their current Gravity pool value (CG) in meters distance. Characters will also gain the thief abilities move silently, hide in shadows, and hear noise at two levels below their own current level (minimum level 1). Thieves and assassins will double their scores in these abilities while using this power.

Strike
Cost: Discretionary
Allows characters to initiate psychic combat with an adept or one of the ignorant. The adept selects how many points to alot from the gravity pool. These points translate in to a positive modifier for the psychic combat resolution check.

Speak
Cost
Adepts with his power may send their thoughts to others. The adept may communicate 2/km per Gravity point invested. It is well, understood, however, that such communications are not completely secure, see the listeng for the Hear power listed above.

Psychometry:
This power allows the adept to see into someone's past by touching an object associated with or belonging to the, The TN is the number of days that have passed since the object was last touched. For every 5 gravity points spent, the player may see 1d10x days into the subject's past. Usually, pertinent information or violent/dramitc events are what is seen.


Telekinesis:
Cost: The player may lift 1kg per gravity point spent.
Tis is the power to mainpulate physical reality with one's mind. It may be possible for extermly high level adepts to kill by stopping hearts or shutting down blood flow or what have you. That shit isn't covered yet, and is pretty much a matter myth in the Metal Earth. It happens, sure, but no one has seen it in a very very long time, and it must be learned from someone who already knows how.


Psi-blast:
Cost: 1gp/pt of damage & 1 pt per 5' range. If the character wishes to touch the target, no addtional point is required by a to hit roll must be made.
This is an etheirc balst of pure mental energy. Cost, range and damage are detailed anove. How it looks/sounds/smells is up to the player, but once these things are selected, she is stuck with them forever.

Drain
Cost: 2x number of hit points taken, but if successfull full recovery is made instantly.
Drain hit points from other living beings, these beings are allowed an ST vs. death. If the throw is made they suffer no ill effects and the adept loses the commited points. 1 in 6 adepts with this power can take sustenance no other way, and must feed off sentient beings in order to survive. Beginning 1d4 days after a successful feeding (25% of the adept's maximum HP); 1hp and 1gp are lost everyday between feedings, and the adept cannot heal. Incedently this is how moonwraiths feed, and if the PC is found out, there might be some serious social repercussions. 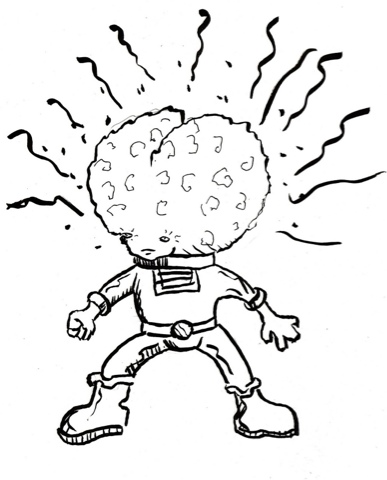