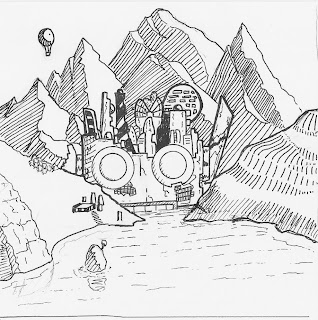 Head, a city on the north coast of Xäl

The Zen of Freight:

As a freight handler, the job I had before returning to the eternal womb of academia, I possessed but one rule: never touch the box. Now, my job was to move boxes from place to place, but my goal was to never ever touch them, ever, ever, ever- impossible, yes, but also sensible.

I try to approach rules tinkering the same way.

I try never to change the rules, but unfortunately as a referee engaged in the act of bending a game to my world, it’s my job. Therefore, whenever I do touch a rule, or group of rules, I try to minimize my contact, whilst simultaneously achieving my goal.

All that brings us to skills. I do not want to use them; they are fiddly and full of suck, but I want to have a system for overcoming certain kinds of obstacles and executing certain actions. Beyond that, I want a system that recognizes that different characters have different capacities in regards to different activities.

At first glance, that would seem to leave me at an impasse.

However, looking at S&W I see a preexisting mechanic that can be used without changing much of anything at all- the saving throw.

Every character has already has a ST. (See that, I’m not touching the box, and already I’ve gotten somewhere).

What I’m about to say is so simple that I’m (no joke) really not sure if I can express it clearly- let me know, please.

If a character wants to climb a cliff, pick a lock, navigate a ship, figure out how to recharge an energy weapon, or, really, do whatever, they (at the ref's discretion) must make a saving throw. This saving throw may or may not be subject to modification by the referee. This modification may be based on one or at most two, of several factors, including but not limited to- character background, an attribute score, the difficulty of the task, wind speed, relative flatulence, breast size or whatever.

[Note- some tasks (e.g. getting drunk, blowing your nose, walking down the street) are so easy that they should not require a ST- but hopefully you knew that; otherwise, lay off the glue, man; your habit demeans us both.]

Back to the ST.

After riding all day through the Jungle of Nool, Kronarg The Cannibal comes to a sheer cliff blocking further progress. He decides to climb the cliff and keep going. The referee frowns, ingests some (possibly illegal) chemicals, and considers the factors in play.

Kronarg’s strength is 15; he is a level 4 Fighter, which makes his base saving throw a 13; he grew up in the southern wasteland of Skeeme and never saw a hill until after his 20th birthday.

To determine Kronarg's base modifier, the ref divides his strength by 6 and rounds down (I’m touching the box, now; be cool, it was bound to happen) this gives Kronarg a modifier of +2.

However, it is windy and near dark; furthermore, Kronarg hasn’t had much experience climbing sheer cliffs. The refereee decides it’s a wash and tells the player to make a saving throw with no modifiers. If Kronarg can beat a 13 he climbs the cliff without too much trouble. If he misses the Referee may grant another saving throw (perhaps based on dexterity) for Kronarg to regain his grip, or maybe he just falls and takes some damage- it’s up to the ref.

So, in summary here’s how I roll-

Decide which attribute best applies to the situation, divide it by 6, round down. This is the player’s positive mod.

Determine if the task is difficult or easy or whatever:

This is completely up to the referee. It can be a negative mod or a positive or no mod at all.

Keep it at two mods- hell, keep it at one (or none) if you can and it makes sense to you.

Okay, that's pretty much it. This can be used for just about anything the PCs might want to do.

Once more: Pick a stat; divide by six; assign a mod or two; you’re done.

Now at this point, if you’re really drunk (again), you might be thinking: wow- that’s not a bad idea, maybe this Aos guy should make up a table of common modifiers.

Maybe you should put down the wine cooler, step the fuck away from the box, and reconsider for a second, eh, Slappy? First- wine coolers? Really? This isn’t 1988, bud; show some fucking dignity.

Consistency is overrated, and has little or no place in my style of game.

You can never step in the same stream twice; you can never climb the same cliff twice; the wind may be different; the light might be better; you might be climbing below Sursha the Sexy on her “no underwear” day.

The referee should never feel compelled to be consistent in the assignation of modifiers. As I’ve said, the world isn’t consistent; furthermore, codification leads to charts. Even under the best circumstances, if you are looking something up on a chart you are slowing down play. In other words- if you’re creating a new chart, you aren’t just touching the box- you’re making love to it. Sweet, sweet love.

Note: Hypocrite that I am, I’ll be touching this box again, anyway, possibly with my tongue, when I make the new character classes.

Note 2: RE: The drawing- I do not like the drawing a the top of the post (for one thing, there isn’t a half dressed girl in it), so I’ll be doing it over when I post the detailed break down of Head, which will happen… someday.

I think next time, though, I’ll be starting on those new classes. First up The Emissary- think Taarna from Heavy Metal.