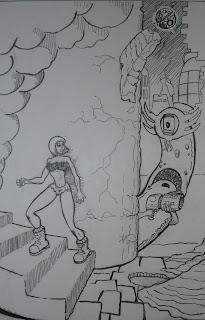 Sea of Ghosts: Once long ago, a green glowing stone, from some evil and unknown somewhen, fell through a hole in space and tumbled into the Shimmering Sea. The stone exploded upon impact with the sea. The once crystal clear waters turned dark and murky as they became infected with the evil of the stone. Malign currents stirred the silty, soul filled sea bottom and disturbed the spirits of an eon, tearing them from the bosom of death and forcing them into a tortuous half life. The Sea of Ghosts is haunted by the specters of a thousand thousand generations of sailors, sea monsters, and everything else that has lived in died in the ocean. Ghostly ships prowl the wave tops , spectral u-boats prowl the depths alongside liopleurodon zombies, and vampire trilobites scuttle across the seabed. Aside from the Mür, who have mastered some secret of passage, the living avoid the Sea Of Ghosts. A homicidal and suicidal madness will overcome any crew caught out on the sea after dark.

Sea of Ice: The Sea of Ice is a cold and treacherous body of water, ripped by rogue currents and clogged with ice. However, the waters support a thriving ecosystem of varied cold water taxa; primitive and warlike, nomadic bands of beastkin, cave apes and cyborg mongrels make their homes upon the ice in the winter, moving to the coastland and the banks of the Ugörr in the summer.

The Ruingulf: The Ruingulf is the central feature of the region. It connects the disparate settlements, providing the fabric for the web of culture, warfare and trade in which they are forever entwined. The depth of the ocean varies greatly from place to place, but the waters are nearly uniformly clear, especially in the south. The Ruingulf takes its name from the seeming endless assortment of algae and coral covered ruins that cover its sandy bottom.

Xäl: Mostly wilderness now, five hundred years ago, during the time of Artimus Brood, southern Xäl was the last area of the region still controlled and occupied by humans. Since that time the settlements have been abandoned and the southland has, like so many places in the world, been reclaimed by the wilderness. As to what became of Brood’s people, rumors are many, but certainty is nonexistent. The ruling family of Head name Brood as the founder of their line, but many doubt the veracity of this claim.

Skeeme: A world unto itself, the island of Skeeme encompasses a variety of environments and peoples. Rocketmen, Ratlings, Slavers, Neanderthals, Minotaurs, Hawkmen and monsters of every description live, fight and die on Skeeme. The island is featured heavily in the Saga of Brood and is rumored to be a treasure house of ancient technology.

The Hungry Shore: The Hungry Shore is an especially treacherous area of the Rüingulf ; sharp, ship breaking reefs, time storms, hurricanes, meglodon, kraken and savage mere people slavering for sailor’s flesh are just some of the hazards faced by ships crossing this area. The secret of passage through the maze of reefs and semi permanent vortexes is known only to a few, and their services never come cheap. The fishing is good, though.

The Desert of Rust: The Desert of Rust is a huge scorching-hot wasteland of broken and decaying machines. Forever hunted by giant iron eating robot worms as well as other fell and depraved monsters, autonms and other mechanicals eek out a living there, lurking and scavenging amongst the wreckage.

The Burning Peaks: The Burning Peaks, a ring of active volcanoes, are said to be the home of extraterrestrial creatures known as the Scorn. The Scorn are sadistically cruel, ethereally tall humanoids with purple skin and gaunt nose-less faces. Why they chose to settle the region of the burning peaks is unknown. They cannot survive direct contact with the volcanoes any better they the native inhabitants of the planet and live in shielded, hidden obsidian cities powered by geothermal heat. The Scorn provide the Slavers of Gear with some of their best custom, and it is not uncommon for overland slave caravans to make there way along the southern edge of the Desert of Rust up into the Burning Peaks in order to delver merchandise.

The Lake of Fire: The lake of fire is in reality a volcano that is erupting very slowly though fissures lining the bottom of a huge basin. The area contains a complete ecosystem, though, and is controlled by Salamanders and Magmen, who have little contact with the outside world but are continually at war with one another.

Jungle of Nool: The Jungle of Nool is a huge rainforest the true dimensions of which should not even to be speculated about. The jungle teems with life like no other place on the planet, and hides more secrets than any other local as well. The ruins and remains of whole civilizations are lost in the shadows of the deep forest concealed beneath the massive and tangled vegetation.