Caverns of Empire, The Hidden Forest

Abstract: Ancient place, haunted by a tragic history. Quiet, but not silent. Peaceful, but not safe. Abandoned, but not empty.
Once a part of the main cavern network, the cave containing the Hidden Forest was sealed away from the other nearby areas in Kingdom times, and has since transcended concealment and become completely forgotten, or at least mostly so. A few explorers, escaped slaves, and slave chasers have stumbled into it over the years, but few survive and fewer still deign to talk of what they have seen. 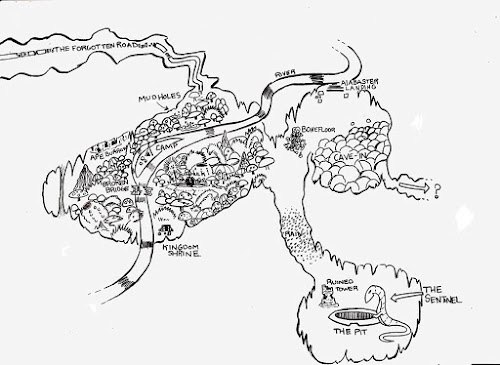 Ape Burrows: these noisome caves are the residence of a band of white cave apes. Travelers will smell the place long before they see it.

Alabaster Landing: the Titan River touches the cave here, once there was a sort of temple in the place, but all that remains now is the odd pillar of mottled and dirty grey marble, and a flight of discordantly gleaming steps made of a stone so white that it seems to give off its own light. Curious ruinic inscriptions mark the steps.

Bonefloor: the floor of the entire Hidden Forest is covered in bones, remnants of an ancient battle. Over time, most of these bones have been covered with moss, fungus or some other living agent. In the rare places where this is not the case, a hard translucent mineral layer covers the bones.

Cave-in: area of the ante chamber comprosed of cave fall. The terrain is broken and jumbled here; it eventually becomes impassable as roof meets floor in a mad chaos of broken stone.

Camp: This is where Professor Goris (Troglodyte) has set up his residence while he works up the courage to explore the rest of the cave. He makes a good impression, but he was once described by an Endless as "that dimestore Rasputin." Although the meaning of the insult was lost on him, Goris has never gone a day since without pondering its significance. Usually, he decides that it was a complement.

Broken Bridge: A tumble down Kingdom structure; on either side of the river, the near twin remants of the bridge, each termainating in a blackened, shattered spur of sorcery twisted stone, extend less than a chain from the bank. Careful examination reveals the bridges destruction as a product of intent.

Mud Pools: Boiling mud comes to the surface in many places throughout the cave, but is most common in the regions at the cavern's northern extreme, near the Forgotten Road exit.

Ruined Tower: A remant of the Kingdom's great anti-surge fortification.

The Sentinel: A huge reptillian beast of unknown kind stands guard over the Pit. Its eyes are vast dark pools in which it is said one can see one's own death. The mere sight of the creature summons up a feeling that surpasses both fear and grief at their respective extremes. Only the hardiest can remain in its proximity and any foolish enough to stay long, no matter their intial strength, succumb to madness.

A giant minotaur resides in the cave. He is a merceless hunter, never yeilding prey once he has made contact. He favors eating live game, and often carries about a still twitching victim while walking about in the bush. A noise like that of a thousand grinding and clanking machines emanates from the creatures as does an unbearable chemical stink.

Here are some bad pics of the master map, which is too large to scan. 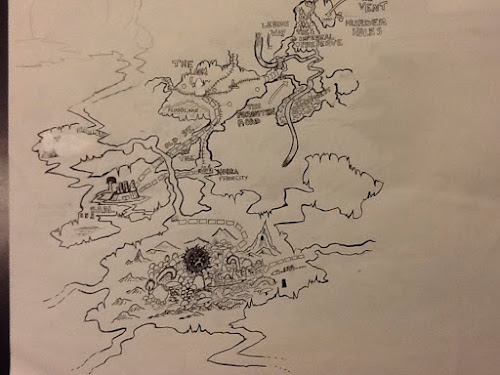 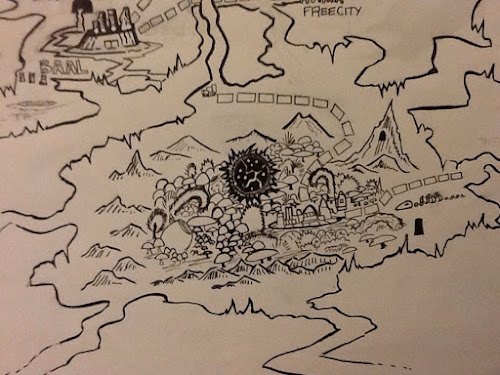 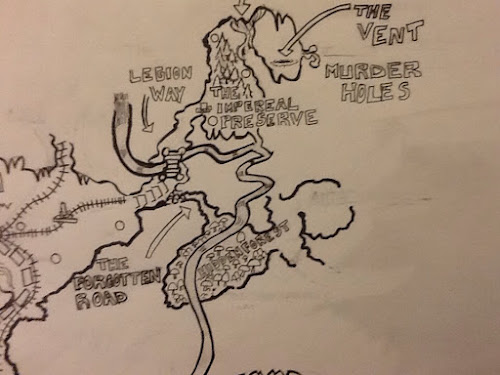 Tomorrow, Beyond the Leaning City, Pt. 2