For the Metal Earth
Epoch: The Age of Lead
Period: The Flare


The. power of the moonwraith, or space vampire, is thought to have been broken at the dawn of the Flare. However, this is not the case. They have merely taken themselves and their undying emperor underground, where they reside patiently, in their Caverns of Empire, waiting to resume their mastery of the surface when the sun goes dim once more

Despite the name, the caverns are not universally controlled by the 'wraiths. The moonwraith legions made their first forays into the underworld long before the begining of the Flare, and have been there now for five thousand years. They are latecomers, however, in comparison to most of the cavern's other intelligent life. Even so, the Empire is, at present, the largest power block in the region beneath Satan's Spine and, presumably, beyond it as well. Many groups strive against the 'wraiths and one another, competing for mastery of the cavern's resources and space. The moorlocks; the Men of Baal; the City of the Spiders; and the minions of the abomination, represent some of the more powerful factions. Many galleries and grottos lie unclaimed and wild, however, too savage to be tamed.

Air is manufactured by huge atmosphere plants of ancient, near-mythical origin. Water can be found, but more often than not it is locked in the rocks, boiling, or sealed up in huge subterranean cavities- vast surfaceless seas, accessible only in certain places.

Hellstone, another important resource both sought after and feared, lies hidden in nodules throughout the earth's strata. This remarkable mineral is thought to be the source of the unnatural fecundity that makes life possible in the caves, and fell beasts in great numbers as well. The 'wraiths and some others mine hellstone and make use of it as a sort of magical fuel.

The Current
No discussion of the underworld would be complete without mention of the Current, the seemingly endless stream of undead that flows up from the Earth's core. Both Baalor and the lesser imperial cavern have active Horde holes, and fight a continuos battle to hold the seemingly inexhaustible enemy at bay. The Men of Baal, who are not men at all, have a long standing knightly tradition structured around this eternal conflict. It has made them amongst the most deadly fighters in the world. Conversely, although the moonwraiths are mighty fighters, they prefer to combat the problem of the Current with an army made up of unruly slaves, criminals and prisoners of war, the so called Doomed Legion. 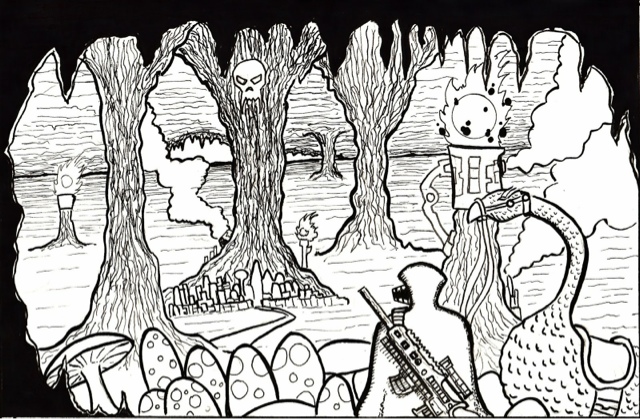