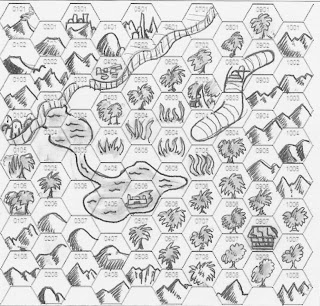 Once a seabed, now a tropical wilderness hidden away in the cold north. What secrets does it contain? What horrors of the dark and deep places remain, nurturing their unwholesome appetites, waiting for a chance to feed?


Anyway, one night about a month ago I was reading Warlord of Mars and, although there is no atmosphere plant in the story itself, there are references to the one Carter visited at the end of Under the Moons of Mars, which got me thinking about such things and how they might impact the landscape around them, which led to this-

One page wilderness hextravaganza... Metal Earth Style.
Get it here: