The Valley of Bones: Forces and Factions 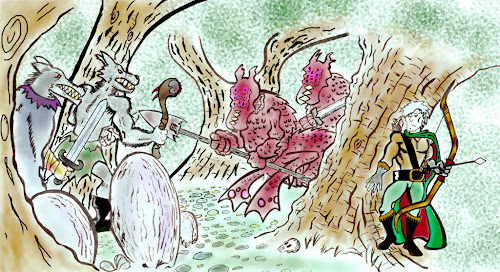 Pardon the image reuse, please; this entry is actually what It was intended to illustrate. I need to stop posting them whenever like that.

This section gives a brief description of some of the groups vying for power, control, resources and survival in the Valley of Bones. Powerful individuals will be addressed in a future post.

The Warriors of the Black Sun (AKA Rictus' Mob): gnolls and others openly in the employ of the self proclaimed Hex king Rictus. Although the presence of this group lies heavy over the valley, the location of their head quarters is a closely guarded secret completely unknown to outsiders.

The Vargann- sentient arachnids who dwell in several nests deep in the forest and in the Under-Vale as well. Their queen is rumored to dwell in a scaborous city somehwere in the deeps.

Dragon Marked: agents of Dreg the Wyrm, usually engaged in observation and compilation of information, and only rarely active in any other sense. Their existence, like that of their master, is largely unknown to the other residents of the valley.

Hexlings: dwarfs and others who have turned away from law and now serve chaos (i.e., Rictus). They are everywhere, usually acting as sleeper agents waiting to strike. Nonetheless, most believe them to be a myth.

The Wounded- the fatalistic and not entirely benign elfs who live at Broken Spire and in the surrounding forest.

Deepspawn: vile creatures from the Under-Vale. For the most part the spawn keep to their own Black City far from the light of the sun; however, they will occasionally in the pursuit of some noisome goal, come to the surface- in force.

The Observers (aka sky elfs)- selectively aloof elf clan, housed in an invisible floating castle. Although their official policy (as it were) is one of non interference, they meddle in valley affairs with an intensity that makes this stance a bit of a joke.

Clan Ironhelm: the settlement of dwarfs at Dogwall, currently locked in a cycle of decline and internal conflict.

P.S. I put up a full (B/X) adventure yesterday, get it here.

Email ThisBlogThis!Share to TwitterShare to FacebookShare to Pinterest
Tags: Dwarfs, Valley of Bones