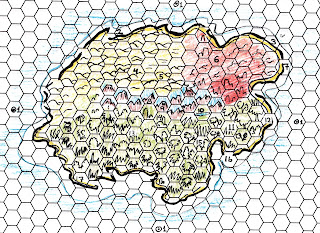 We finished up with Island X on Saturday in one of our semi-annual face to face marathon sessions. I have everything more or less detailed, but I need to ink the maps and type up the bestiary. I'm guessing I'll have the whole thing done in a couple more posts and then I'll make a pdf maybe. The campaign is in its final phase, which is good, because I'm getting a bit tired of supers, and I want to focus on Metal Earth and my stupid novel.


Edit: I didn't key all the hexes because I thought the job would be better served by encounter/event tables (which I also need to type up).
Posted by Aos at 3:34 PM