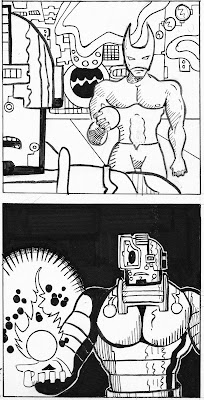 This is (very) brief survey of some of the lost and hidden areas of the Earth Zero Universe, the setting for my icons campaign. I will be detailing them in play, and then writing them up here; Aquaticus and Island X are both soon to be visited by the heroes. The panels from page 6 of the Earth Zero comic (Cosmic Tales) I'm slowly putting together. The second panel is a redraw of something I posted previously. The artifact depicted is the Seer Sphere, the ultimate information gathering device. the doodz are Ord (the cybernetic looking fellow, and his brother... Aos (I can't be the only one who picked their online nick based off a character can I?)

No-space: a plain that lies between the parallel universes of Upper-space.

Hundulan: A Pleistocene world located in a hidden area of the Antarctic. Sustained by paleo-magic and ruled by sorcerous Neanderthal Priest-kings.

Posidinus: The remains of an ancient civilization hidden beneath the waves of the Atlantic. This civilization consists of 10 warring city-states.

Aquaticus: A second submarine realm, located in the pacific. Ruled by Nairamus, the Aqualord.

The Hollow: An alien constructed dinosaur preserve inside the moon.

The Nexus: The extra dimensional home of the Universals (space gods) possibly located in its own pocket dimension.

Dead Space: The primal universe, which lies outside of and is inaccessible from the multiverse. It predates the big bang and is largely energy depleted. It is the home of the No-gods, a group of evil space gods that staged and unsuccessful attempt to invade Upper Space 35 kya, using the Earth as their beachhead. They were driven back and the rift gate they created was destroyed, but the advanced Neanderthal civilization was destroyed in the process and many Universals were killed. They will stage another attempt at the close of the 23rd century.

Island X: An island inhabited by giant radioactive monsters somewhere in the pacific.