Sometimes it's groovy to step away from the normal sources and look at something a little different.

Chavîn de Huntar is an extremely important pre-hispanic, prehistoric monumental site in the north-central Andes. It is made up of several large edifices arranged in a u shaped plaza, the open side of which faces east. The structures are riddled with constricted labyrinthine galleries, some of which are subterranean.

The exact time of the complex construction/importance is a matter of some dispute, but the most recent 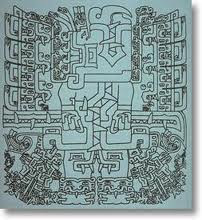 work places it as a center of power and authority in the region between 1300-600 BC. The consensus is that Chavín was a religious site. People traveled to the complex from all over the region. This seems pretty likely, but there is no written language, so it is impossible to prove.

Anyway, what makes Chavîn so interesting (aside from the fact that it's a giant pile of prehistoric awesomeness) is what seem to have been the major intentions of its design (or rather, its designers). In the main, these intentions were to impress visitors with spectacle and to emphasize the differences between the “shamans” (and possibly other elites) and the common folks.

These two goals were accomplished by building a huge (about .5 square km) and imposing site on a tremendous scale (just the size of the place implies power- the power to get people to build it, if nothing else) and by restricting and controlling access to certain parts of the complex. 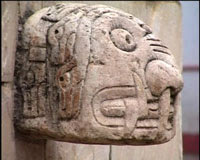 Huge sculptures of human and animalistic/human hybrids some with fierce expressions and many of them shown to be discharging mucus, a byproduct of using hallucinogenic snuff, decorate the walls.

Hidden entrances and staircases made it possible for shamans to appear unexpectedly in places, such as on the top of buildings, . Maze-like corridors (known as galleries) wind within and beneath the structures. Special ducts were made to facilitate the reflection of sunlight into these galleries, providing illumination at strategic points, such as onto a sculpture of the main deity. There were also strategic hiding places, like above the deity sculpture, from which someone posing as the deity could have spoken. As if this wasn’t enough, there was a cleverly constructed canal network that channeled water under the site. The noise of this water is thought to have sounded like endless, extremely loud applause.

So dig it, maybe you’re a chieftain’s son, the heir to your group's power or some other sort of up and 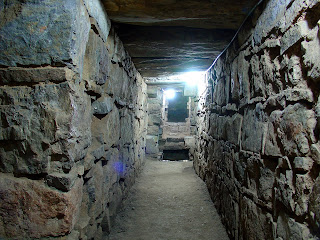 coming bigwig; whatever, on your 16th birthday, you get sent up or down the mountainside to Chavîn. You snort some hallucinogenic snuff, which was probably mescaline (there are lots of engravings of dudes carrying around the mescaline bearing cactus, or something that looks a lot like it, at the site) with some shaman/priest guys and they take you into the central plaza where there are maybe a couple of hundred other people, also all jacked up on magic cactus. The shamans pop out all over the place, seemingly coming from nowhere. There are guys blowing conch shells all over the place. It’s loud and weird and funky. You are tripping balls and are probably loosing it a little. Maybe you’ve got a touch of the fear or you are free form love dancing. Who knows? Anyway, things get pretty groovy, and that’s when they take you down into the crazy roaring dark and introduce you to motherfucking GOD. I guarantee that if you are on mescaline, it doesn't matter weather or not God is made of stone, he is breathing and pulsating and all kinds of other shit. 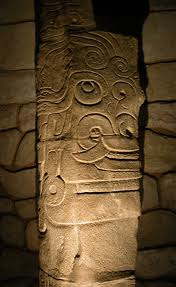 It’s like a fraternity initiation and a Dead show all at once, except Jerry and

John Belushi are combined into one dude, and that dude is the LORD, and he’s got a message just for you.

Also, nothing is certain, but there’s a good chance they ate people there too, so maybe if you failed to please the god, or you hurled on the shaman’s girlfriend, or couldn't hold your snuff, you got taken off to the dinner table. Obviously, these guys knew how to party.

Whatever, imagine all that. Then imagine 500 years later when the place is completely overgrown and the shamans are long gone. Some, if not all, of their treasure remains, though, hidden away in the crazy noisy dark godmaze. Some galleries are probably unstable due to age; other parts of which may be trapped with the intent of safeguarding god’s stuff. You can bet that there are some new residents too: ghosts from the dinner table; some war worms, or mutants, or crazy robots (or orcs or something if you roll that way) reenacting the long forgotten rituals. Explorers might have bizarre flashbacks to the distant past when the place was active. Possibly, the entire place is psychoactive and just being there makes you really, really, really fucking high, which may not be all that cool when you are wandering around a monster infested labyrinth. Nothing will kill your buzz like painful grisly death- except for listening to ABBA, anyway. Maybe Jerry Godcia is still there too, only he’s more than just a statue.